‘Harvey’ To Be Staged At Little Theatre 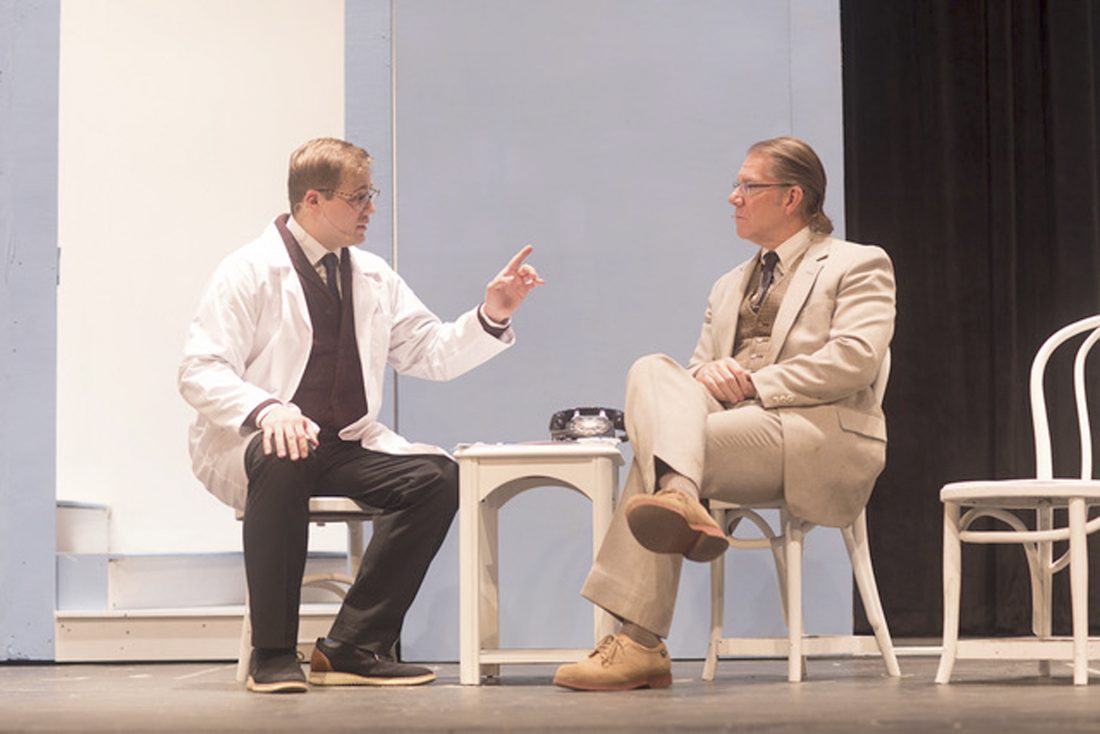 Exploring serious themes in a comical way is what “Harvey” does

Director Richard Walter describes the play as “more than just a comedy. It explores serious themes in a lighthearted way,” considering how people react to those who are different, and stressing the need to be kind.

It’s hard to think of anything more lighthearted than a six-foot three-and-a-half-inch invisible rabbit, and Earl Rothfus, who plays Elwood P. Dowd says the play is “knockout hilarious,” but he also recognizes the serious side of the play.

Rothfus enjoys playing Elwood, and says the hardest part of the role is that Elwood is “hardly present at all.” He is always gentle and there’s not much emotion. Rothfus had to curb a tendency to want to a JImmy Stewart impersonation but realized film is more intimate and allows for close-ups, whereas with stage acting, the emotions have to be bigger to convey feelings to an audience.

Rothfus finds the easiest part of performing in “Harvey” is the cast. “They are exceptional and they all take their roles seriously, making the comedy sparkling.”

Sheridan Smith says his character, Dr. Sanderson, is a bit arrogant, and he likes that, as well as the comedy of the play. He enjoys watching the “funny, funny performers” he is working with and also admires Walter as a director. “He’s a skilled director, giving the actors lots of freedom, while still guiding with his vision of the production.”

Jeri Simora plays Elwood’s sister, Veta Louise Simmons. It’s her first time on stage at but she has done dinner theatre before. She saw “The Producers” and noticed the call for auditions and decided to try out. The hardest thing for her has been learning her lines, but she loves doing a comedy and loves the cast. As far as getting into character, she finds herself thinking, “This is my grandmother.”

Betsy Trusel who portrays Mrs. Chauvenet says the hardest work is to get “the character to be what you want it to be.” Once on stage, she says she loves “acting stupid in front of people. I love making people laugh.”

Alex Connor loves the play itself and the other cast members, but, while she enjoys playing a mean character, Myrtle Mae Simmons some of the lines are so nasty, it’s hard for her to say them. “Myrtle Mae is very self-centered.” Of the play itself, she says she loves the way it frames mental illness and feels that sometimes, someone like Elwood can be “good for us, and good for the world.”

Sharee Dominick plays nurse Ruth Kelly, a role she loves. “She runs things behind the scenes, and she’s funny. I like to be funny.” For her, the hardest part was working with people she had never worked with before, but that soon became the easiest thing because, “It’s a fun cast and we all work well together.” Dominick also loves the play, because, not only is it very funny, but because it has some important lessons on how we should treat others.

Marsha Pownall plays Betty Chumley, a small role that is easy in terms of lines, but the hardest part is not being on stage much, so that she can interact with the rest of the cast. Beyond acting, she enjoys gathering props and costumes. Just before being interviewed, she was fitting a lab coat for Lee John, rolling up sleeves, and considering just where to take it in. “We go with what we can find,” she said.

Walter has nothing but praise for the entire cast. “One thing that was particularly exciting was how many new faces turned up to audition. I am working with eight actors who I have never worked with before, three of whom are new to the theatre entirely. They have been a delight to work with, and we are all having fun together on this project.”

Walter is also working with an assistant director, John Pickett. “John is a hugely experienced performer and has a good eye for the details that the actors need to focus on to create a strong character and give a good performance.”