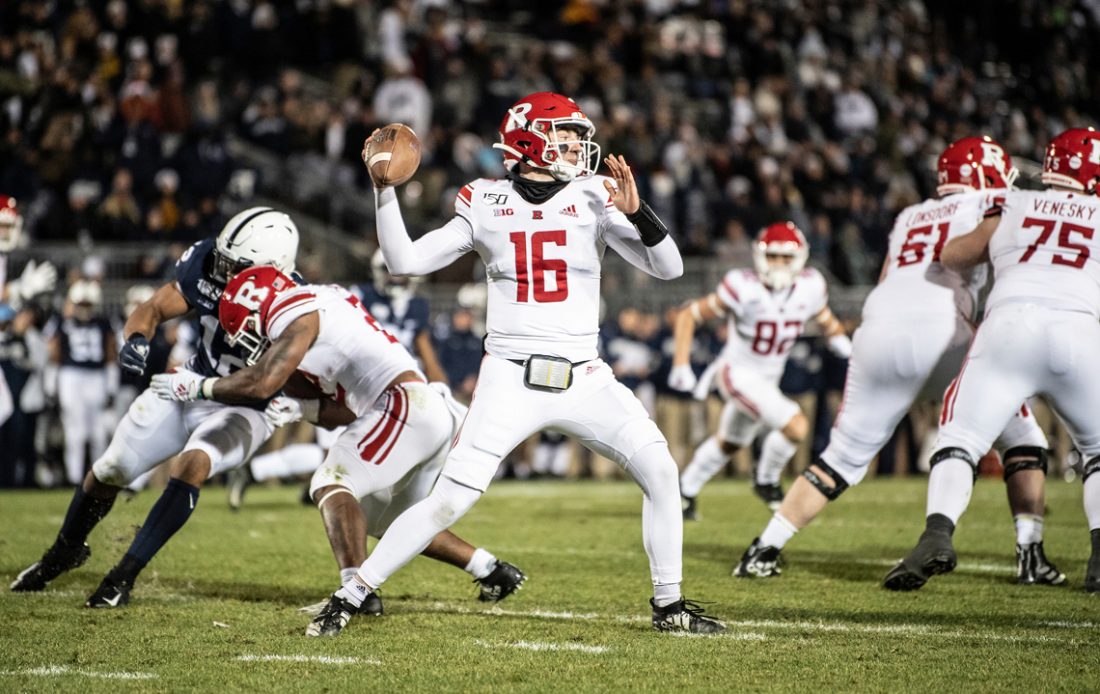 Rutgers quarterback Cole Snyder went 3 for 3 for 35 yards and ran for a first down in his only series of action against No. 12 Penn State on Nov. 30. Photos courtesy of Rutgers Athletics

Before Cole Snyder ever took a snap in a game at Rutgers University, Chris Ash and John McNulty were fired.

Four games into what would turn out to be a 2-10 season, athletic director Pat Hobbs replaced Ash — the team’s head coach who was in the midst of his fourth season at the helm — with interim coach Nunzio Campanile.

Three days after the season ended, Hobbs turned to Greg Schiano who nearly a decade earlier helped the Scarlet Knights to the pinnacle of their program’s recent history before leaving for the Tampa Bay Buccaneers of the National Football League, to turn around the program.

Just over a year into his stay on the Piscataway, New Jersey campus, Snyder would be working under his third coaching staff.

Daunting for nearly every position group on a football team, it’s even harder for a quarterback. 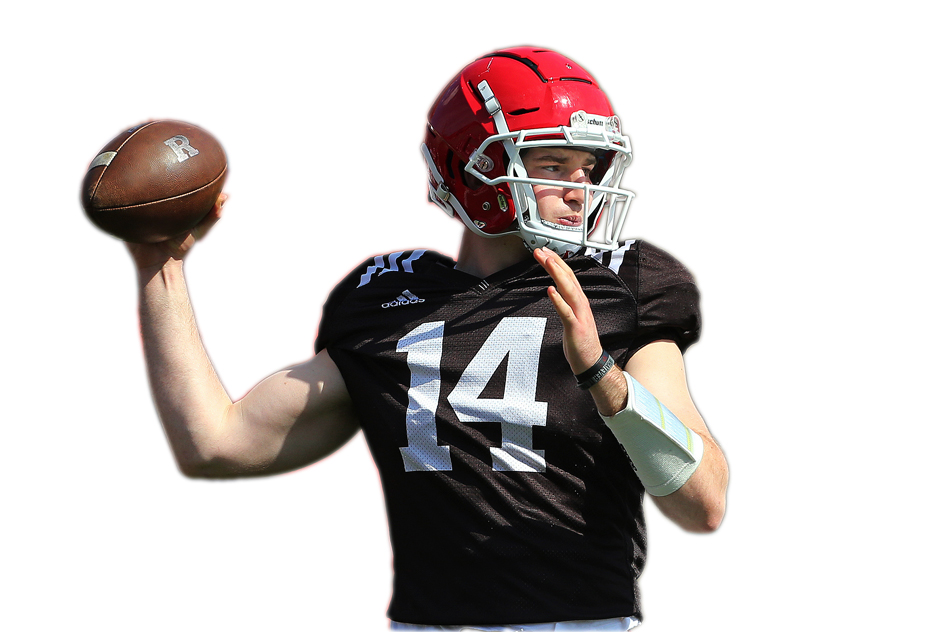 Cole Snyder enrolled at Rutgers in January 2019 to get a jump on his development and take part in spring practices before his first season. Photo courtesy of Rutgers Athletics

But the 2019 Southwestern graduate has taken it all in stride.

He’s not about to give up on a dream he set before his freshman season with the Trojans — to be a signal-caller in the Big Ten Conference.

“When I made the decision to go to Rutgers, I think I made it not based on just football, but on school and job opportunities,” Snyder said Tuesday afternoon. “It wasn’t just coaches. I wanted to go to Rutgers. That’s why I’m still there. It’s a great fit for me and hopefully it works out for the best in the end.”

Now he’s stuck in his Lakewood home, like nearly all collegiate athletes, not knowing when or even if they will return to their respective campuses this fall.

“We left for spring break after winter conditioning and we were told to stay home,” Snyder said. “I had only packed a bag to stay home for a week.” 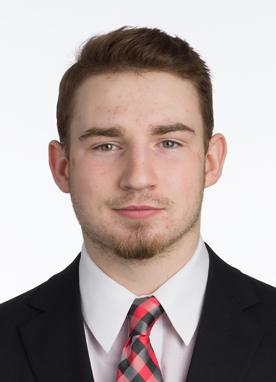 Ash and McNulty saw something in Snyder the summer before his senior year in West Ellicott. Coming off a 4-8 2017 season, the Rutgers coaching staff had an unsettled quarterback room and was impressed by Snyder during an early June camp.

On his family’s drive home from Pittsburgh later that weekend, recruiting coordinator Vince Okruch called Snyder and told him to get in touch with Ash. After receiving a scholarship offer from the head coach, Snyder mulled it over for a day or two before accepting.

The Trojans lost to Cleveland Hill for the second straight year in the Section VI Class C championship game that fall at New Era Field. Snyder graduated early from Southwestern that winter, gave up a chance to repeat as a state champion in hockey, and enrolled at Rutgers that January in order to take part in all-important spring practices to hopefully get a jump-start on the quarterback competition that following summer and fall.

The Scarlet Knights won their season opener this past season against UMass, but followed with three straight losses to Iowa, Boston College and Michigan by a combined 112-16, prompting the firing of Ash and McNulty. 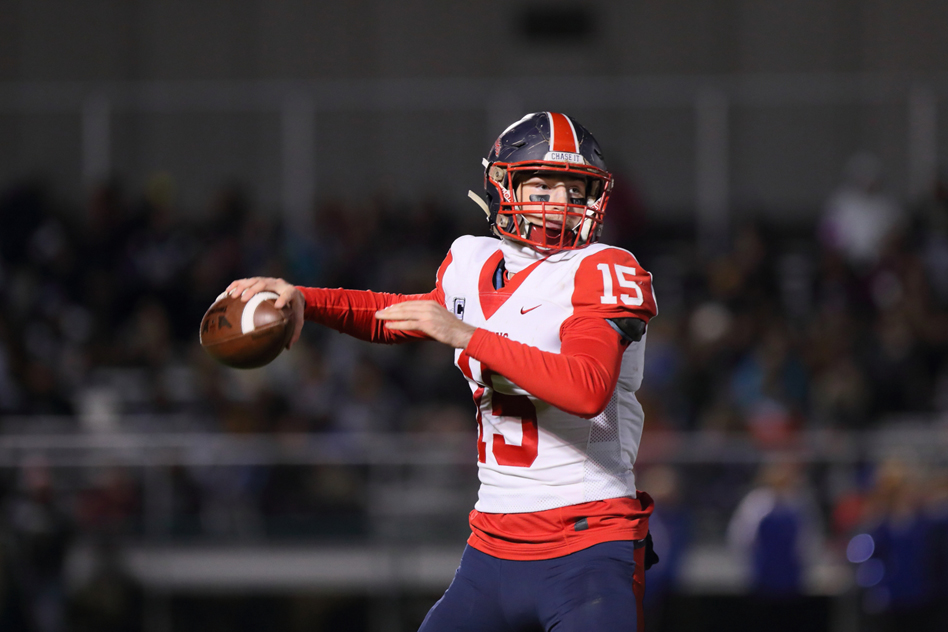 “That was tough to see,” Snyder said of their dismissals. “They recruited me, brought me here and believed in me.”

Rutgers went 1-7 the remainder of the season with its only victory coming against Liberty, and finished 0-9 in the Big Ten.

On Dec. 3, Hobbs turned to the program’s past with the hiring of Schiano, who went 68-67 during his first 11-year stint in northern New Jersey.

“With Schiano, I don’t think there is anybody who is a better fit for the job at Rutgers,” Snyder said. “He’s had great success. Hopefully we can bring that back, or go even higher. I’m looking forward to it.”

In an interview with The Associated Press last week, Gleeson said he tells his quarterbacks he can teach them everything they need to know. They key is being able to use the knowledge to solve the riddles presented in the game.

“That’s what we call the difference between capability and capacity,” Gleeson added. “If I give your brain the capacity to solve problems as opposed to just one move at a time, then I’m going to put you in a better position to be successful.”

The staff has preached being a fast, physical team that takes care of the football ever since its introductory press conference, and it seems the message has been getting across to the team in the short five months since.

“I like him. He brings a fast, physical offense and I’m excited to play in it,” Snyder said of Gleeson. “He likes to throw the ball and so do I.”

Gleeson will also serve as the quarterback coach in what has become a very crowded room over the past several months. In addition to returning players like redshirt sophomores Art Sitkowski, Johnny Langan and Austin Albericci as well as Snyder, the Scarlet Knights have added transfers Peyton Powell from Baylor and Noah Vedral from Nebraska.

“If I have an hour meeting with the quarterbacks,” Gleeson said, “I gotta make sure that the whole meeting flows and I anticipate some questions that they might have.”

Students were leaving for spring break when the coronavirus pandemic hit and were told to not return to campus until further notice. That included football players, who later were told that spring practice was canceled.

“Spring practice is a great time for everybody to get a lot of reps because you are rolling between Nos. 1s, 2s and 3s,” Snyder said. ” … I was super excited because I played a little bit and it was a great experience to get my feet wet a little bit. Going into spring was going to be a great time to prove myself and that I deserved a starting spot. … There are still going to be those opportunities going forward, I just have to make the most of those opportunities.”

Learning a new playbook from a new coaching staff is now taking place over the phone and on Zoom calls — mostly in position groups.

It’s a new kind of learning for players and Snyder can actually see some benefits — especially for quarterbacks — that might not be afforded to the team if they were still on campus and in turn on the physical practice field.

“We are doing Zoom installs and going over some things offensively. We don’t have that time at the facility,” Snyder said. “Coach Schiano (and Gleeson) are doing a great job of providing us with things to be successful during these times.”

Snyder understands with so many bodies in the quarterback room, competition for snaps this fall may be at a level he’s never experienced before.

“It’s great for the room and creates a lot of competition,” Snyder said of the added quarterback talent. “I’m looking forward to competing when we get back to campus. It will be fun.”

The backup behind incumbent starter Ben Burk during his freshman season at Southwestern, Snyder was the unquestioned No. 1 guy ever since his sophomore year with the Trojans.

“It’s a dream come true. … We came here to win games,” he said. “We haven’t done very much of that, but that is one thing we can build on. Schiano will do everything he can to help us do that. We will win games. There’s a lot of upside coming.”

When he set out to play Division I college football, Snyder knew it wouldn’t be easy.

And he wouldn’t have it any other way.