Sandy at her grandparents’ Forsberg’s house in Fluvanna. Summer 1959. The Sherwin house is next door. 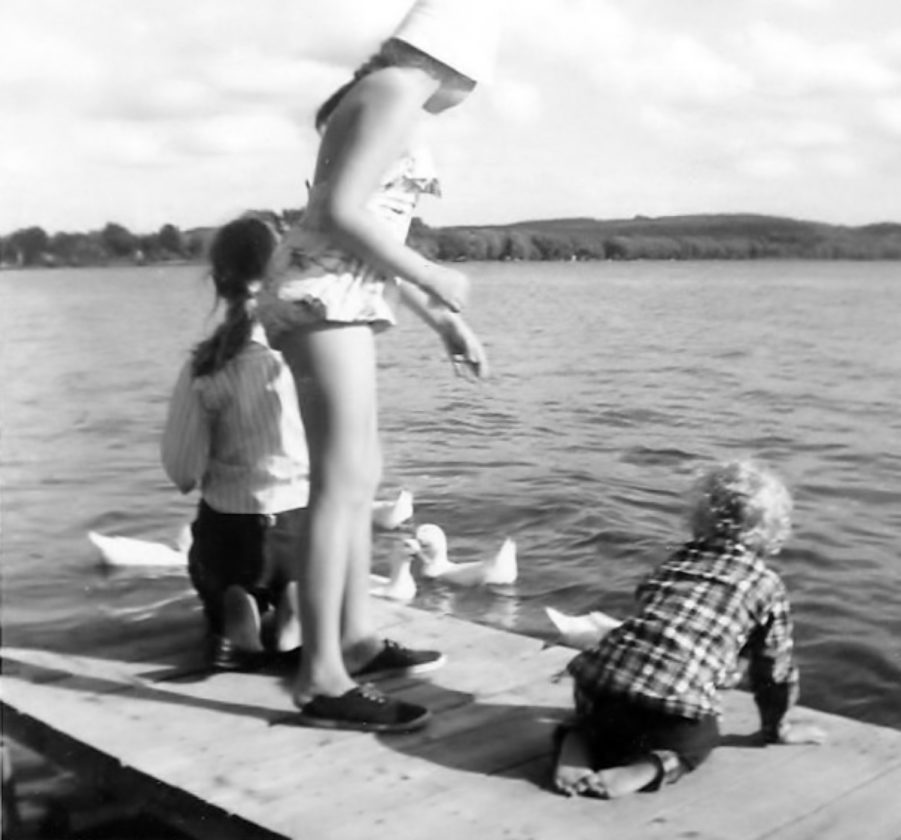 I grew up Swedish. I grew up in Jamestown. And I grew up in Fluvanna too. I write about it now as I do of all other parts of childhood and memory as if it were its own country. And it had its own landscape not just physical but emotional, existential. In my mind, childhood was a perfect place, almost, and I’m sure my memory is flawed and mistaken in some ways. But it is my country of memory.

Growing up Fluvanna, I call it, the years spent there at lakeside, our feet dangling in the water from Grandpa Forsberg’s dock or boat rides up the lake. In my mind, it is usually summer there; my fragile and eloquent grandmother Gunhild’s tulips are ever blooming in a necklace around her house, red, neatly rowed, dug out and saved all winter, replanted when the snow clears. My grandfather Carl is cooking Swedish pancakes for us, plating them three ways — with butter, with syrup, with raspberry jam. His red hair is sticking up like a rooster comb. He is wearing his gray flannel pajamas and matching robe. The spatula is an orchestra baton in his hand. His face is full of joy.

Or he’s cooking the perch he caught that day after fileting a plate of them in the basement. They sizzle in a buttered skillet. Gunhild spatulas a pan of fried potatoes to go with the golden fried fish. The sun glints through the red and white kitchen curtains. Grandmother’s red geraniums bloom there.

Growing up Fluvanna meant feeling safe in the world, looking out at that ever changing lake every day, summer and winter taking in the singular beauty of the spot. It meant ice cold water from the artesian well on the hillside that smelled of mint. It meant firesides watching Perry Mason and Gunsmoke on television with the family while out the great dark picture window, the lake shifted and sighed. In the morning, Gunhild would open the front door and scatter golden birdseed, calling, come on, lilla sparrows!

Growing up Fluvanna meant twirling sparklers on July 4th as our parents and grandparents and aunts and uncles shifted in their metal folding chairs and chatted away as darkness settled. We could smell the lake then, wafting on the breeze. Flares sprang up that outlined the shore as far as we could see. 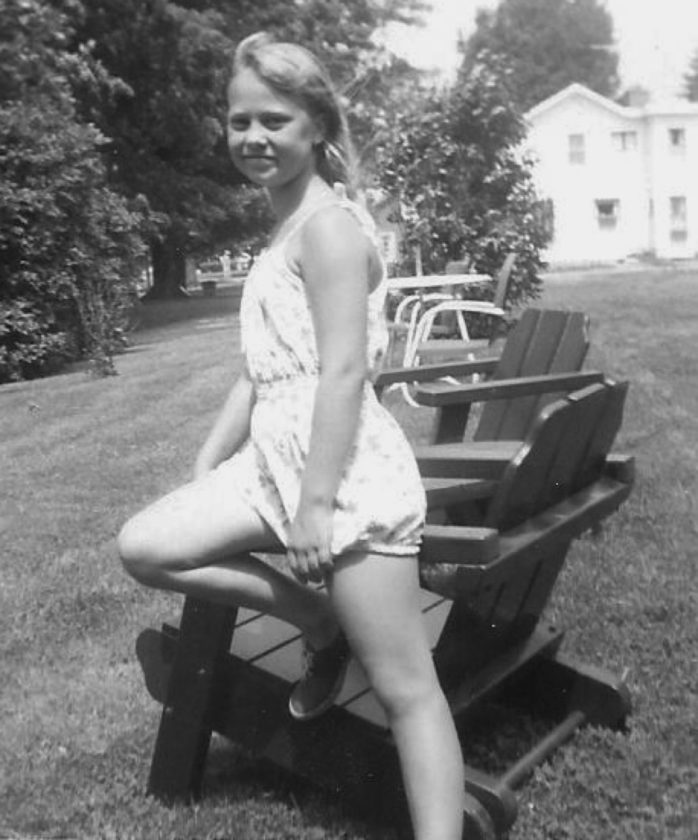 Sandy at her grandparents’ Forsberg’s house in Fluvanna. Summer 1959. The Sherwin house is next door.

I was lucky to spend a great part of my childhood and teenage years in Fluvanna, visiting my Grandparents’ Forsberg and right next door, my cousin Barb, Aunt Ingrid and Uncle George. Their houses overlook Fluvanna cove. Some of the finest times of my life were spent there on the shore of Lake Chautauqua swimming, boating, watching fireworks, or just playing on the front porch of Barb’s grandparents’ house, which was right on the shore. When we were kids, we frequently performed skits and entire vaudeville shows. I was the announcer and usually performed one or two songs like “I’m Gonna Wash That Man Right Outta My Hair” or “There Is Nothin Like A Dame,” two of my favorite tunes from Oscar and Hammerstein’s South Pacific.

My cousin might dress up like a sailor and join me in that song or in hula skirts for a Hawaiian dance. My little golden haired sister, seven years our junior, was always theatrical and willing to act, dress up, sing or play any role we gave to her. Mary and Martha Chase often joined us. We had high standards. No goof ups. No do-overs. The runs through had to be perfect before our live shows went on. When they did, we would seat our parents and grandparents and often community friends like Tom Chase in the front yard of the Sherwin cottage. The front porch as our stage. Our audience would always rise and cheer after each song or dance.

Often, I liked to read in the upstairs office/guest room of my grandparents’ house from a room full of books and thirty years of National Geographics. Most of our days were spent in quieter pursuits, sitting on Grandpa Forsberg’s dock, “falling in” (we were not allowed to swim there), going for rides in Grandpa’s white fishing boat with its 18 mph Evinrude that chugged along.

I can still feel the sun on my face and wind in my hair on those rides. Carl would man the tiller, and I can see his face, smiling that calm Buddha-like smile, enjoying life as he chauffeured us up the lake and down the other side.

Sometimes we sat outside after the sun went down and watched the fireflies. 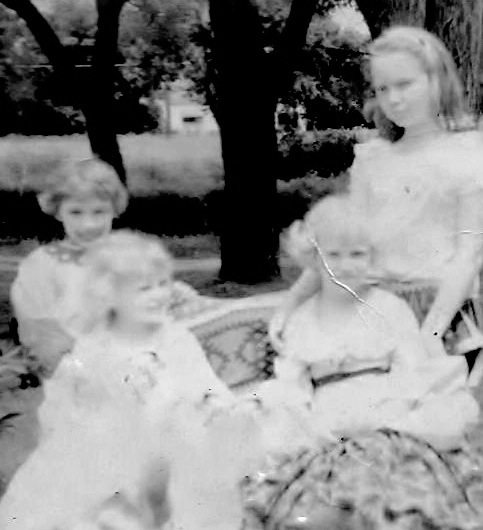 There was a brief time I lived with my aunt and uncle too, and when I did, we all rode the school bus driven by the ever smiling Pint Traynor to Maple Grove. He never got mad at anybody, and as I recall, no kids acted up or caused trouble. The ever affable Ken Davis had a sparkle in his eyes. Smart, funny Tom Nolan got on a few stops before us and always had a joke and a story to tell. We called Tom Nigel Entwistle Throckmorton the Third (a role he concocted for himself), and he played that it well, making us all howl with laughter on the ride to school. Boody Close was full of jokes. Ros Rainier always looked elegant. Tom Chase and Bruce Swanson rode that bus. Fred Estrup and his sister got on at the corner of Townline Road. These are people of memory.

Most of the teachers at Maple Grove were special, recognizing and appreciating creativity, encouraging individuality. Notably I recall the gifted Loren Hunt, our choir master, and his directions on phrasing and pronunciation. When we struggled as a group with the magnificent words Gloria In Excelsis Deo, he laughed and suggested we sing “in eggshell sees dayo!” It worked! We were in harmony from then on. As we sang, the spotlight on stage felt like the sun. It felt holy. Isn’t that what the best teachers do? Imprint memories that rectify us, that we carry with us always?

And the Hamblins, Basil and Kay, who taught us English and Drama, gave us a glimpse of a more Bohemian world beyond Bemus Point and Fluvanna. Mr. Gese, the Spanish teacher, was tolerant and kind; Mr. Carlson, chemistry genius in his bow tie and his Marine crew cut, made us all respect science forever.

Growing up Fluvanna was a fine thing. It is the land I come from and dream about, that hamlet by the lake. It brought me up. We all have these places inside us, the places we come from, the places that brought us up. If we get lost, we can still smell the lake, the wind, the gardens. We can sit again in the kitchens that warmed us, where people who loved us smiled. It is the past we tread in then, luminous and fine.