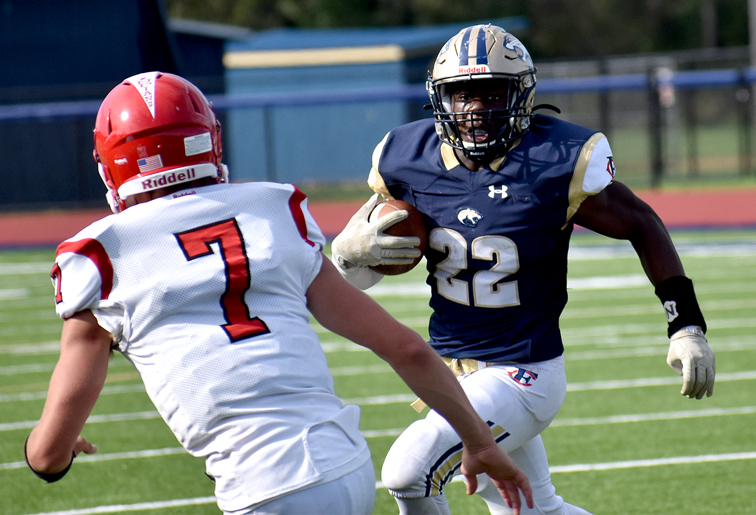 FALCONER — The Cassadaga Valley/Falconer football team came ever so close Saturday afternoon to christening its newly renovated athletic complex with a victory.

But two golden scoring opportunities, including one in the closing minutes, came up empty and the Golden Cougars suffered an 18-13 nonleague setback to Section V’s Red Jacket.

Matthew Record tossed touchdown passes of 40 and 3 yards to Jarrett LeGault and Chase Rizzo, respectively, and Logan Keifer ran 51 yards for the other score as the Indians raised their record to 2-0. 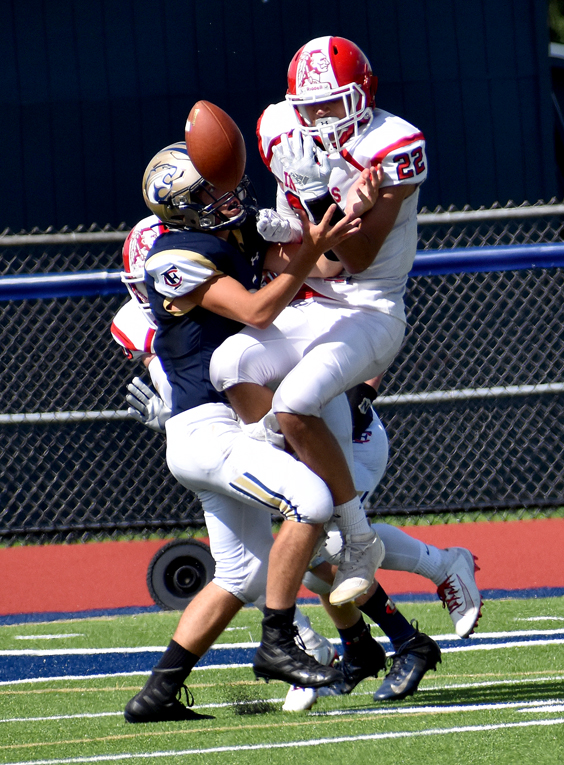 With any luck, however, the hosts could have sent the near-capacity crowd home with a come-from-behind win on the day Bill Race Field was rededicated. But after stopping Red Jacket on downs with under six minutes remaining in the fourth quarter and a short field to a potentially go-ahead touchdown, the Golden Cougars ended up so close, yet so far from its first victory of the young season.

Taking over at the Indians’ 39 and trailing 18-13, Cassadaga Valley/Falconer put together two first downs and found itself at the Red Jacket 7 with just under a minute remaining. But a third-down play was stuffed for no gain, and on fourth-and-3, running back Noah Abram was stopped short of the first down. Two Red Jacket kneel-downs ran out the clock.

That Golden Cougars’ near miss was their second one on a beautiful late-summer afternoon. The first came in the first half. After tying the game, 6-6, following Brock Johnson’s 9-yard touchdown burst early in the second quarter, Cassadaga Valley/Falconer appeared almost assured of a TD moments later when linebacker Collin Mower intercepted a Record pass and nearly returned it to the house for a go-ahead score, but was brought down at the 2. With a first and goal, however, the Golden Cougars never found the end zone as four plays netted zero yards.

“That was a huge momentum thing, too,” Sopak said. “If we could score there, things were going our way, but it’s high school football.”

Cassadaga Valley/Falconer did put together a long drive early in the fourth quarter, with Abram (31 carries, 136 yards) doing much of the work. Keyed by his 40-yard run, the hosts got into the end zone when he scored on a 1-yard dive with 7:47 remaining. Drake Pierce booted the extra point to pull the hosts to within 18-13, but that was as close as the Golden Cougars would get.

“It’s going to be a tough year for us,” Sopak said. “We’re trying to grind it out. Inexperience is hurting us right now, but at least they came to play.”

NOTES: Record completed 10 of 20 passes for 128 yards, two touchdowns and two interceptions. … Keifer led Red Jacket on the ground with 110 yards on 17 carries and a TD. … Landen Mower had a pick for the Golden Cougars. … The intersectional game was made necessary when both teams had holes in their schedules. Cassadaga Valley/Falconer was originally supposed to play Maple Grove, but the Red Dragons decided to play eight-man football in late August. … Red Jacket is located in Shortsville, which is 28 miles southeast of Rochester.