Prank At The Ballpark

In this Aug. 6, 1990 file photo, Peter Funt of the “Candid Camera” television show shares a laugh with Jamestown Expos pitcher Bob Baxter, who was a victim of a prank that was aired on CBS two months later. P-J file photo 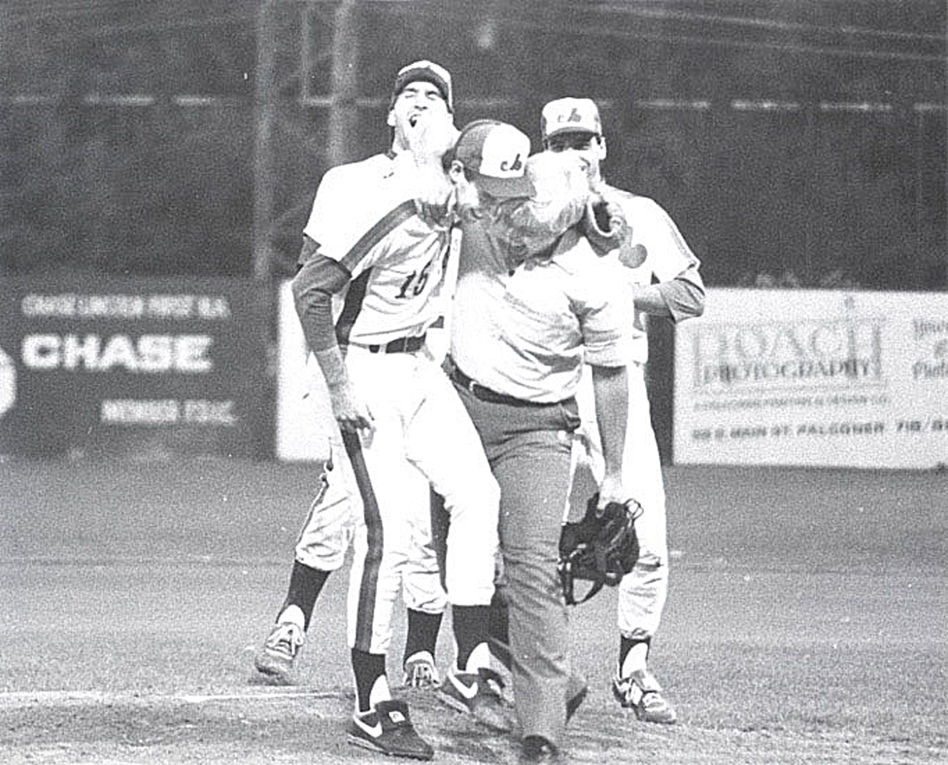 In this Aug. 6, 1990 file photo, Peter Funt of the “Candid Camera” television show shares a laugh with Jamestown Expos pitcher Bob Baxter, who was a victim of a prank that was aired on CBS two months later. P-J file photo

“I wanted to get on TV some way. That wasn’t the way I was planning on dong it,” said Jamestown Expos pitcher Bob Baxter after he became the victim of a “Candid Camera” prank in front of nearly 2,000 fans at College Stadium Monday night. And millions more will see it on Oct. 4 when “Candid Camera’s” sports special airs on CBS in prime time.

The prank was taped at the start of the regularly scheduled New York-Penn League game with the Niagara Falls Rapids. That game was preceded by the completion of a suspended game from Sunday night. The only people who knew about the prank before it was put into action were the Expos coaching and front office staff, the public address announcer, the official scorer, the scoreboard operator, the umpires and The Post-Journal.

Peter Funt, son of “Candid Camera” founder Allen Funt, first set up the prank by having Expos catcher Dan Hargis give nonsense signs to pitcher Baxter. Hargis and Funk, who posed as the umpire, were wearing microphones.

There were also microphones hanging from the press box for the crowd reaction.

“We were better covered than “Candid Camera” usually is,” Funt said about the abundance of sound equipment.

When the prank began, Baxter, as expected, kept shaking off the nonsensical pitching signs from Hargis. After a couple of meetings on the mound and more shake-offs, the left-hander wound up anyway and prepared to deliver a pitch — which was not in Funt’s plans.

“I didn’t know what the heck he (Hargis) was doing,” Baxter said. “I figured, ‘Let’s get this game going. I’m ready to pitch.'”

But Funt didn’t want a pitch to be delivered because that would have officially started the actual ballgame.

“I was trying to think of what I could say as a reason I didn’t want him to throw it,” Hargis said. “So I ran out and told him, ‘I didn’t give you a sign yet.'”

For the next 10 minutes, Baxter kept waving off the pitching signs and then, out of frustration, wound up to deliver a pitch a couple of times anyway. The game was stopped each time. While the fans voiced their complaints, there were numerous conferences on the mound involving Baxter, Hargis, Funt, Manager Pat Daugherty and the Jamestown infielders.

Hargis said that during one conference with Baxter the pitcher asked his catcher to give him a sign.

“I said, ‘I am, but you’re not watching,'” Baxter recalled. “I was almost having to pinch myself to keep from laughing. I was trying to keep a straight face.”

Baxter’s face was very straight, and getting very red.

During one of the conferences at the mound, first baseman Randy Wilstead, who was not in on the prank, asked Baxter, who attended Harvard, about the simple hand signals used to denote pitches.

“How hard is it? One, two, three (for fastball curveball, change-up),” Wilstead said.

Funt pointed out that Daugherty really helped the prank when he told Baxter if he couldn’t figure out the signs, he would bring in another pitcher who could.

“I think that shook up Baxter more,” Funt said.

Eventually, Funt went to the mound and threw the throughly frustrated pitcher out of the game. Then he called him back and said, “Smile, you’re on ‘Candid Camera!'”

Then the rest of the players and the fans were told of the same thing.

However, Baxter provided a bigger surprise after he was allowed time to warm up again and regain his composure. When the real game finally started with the real umpire, Dave Steveley, behind the plate, Baxter retired the first nine Niagara Falls batters in order, including four of the first five on strikeouts. He went on to pitch a complete seven-inning, four-hit win to increase his record to 3-0.

That pleased Funt, who said, “I’d be willing to come here for the right price and give him a pep talk all the time.”

Funt said the idea for the prank came “right out of my dad’s head, where 99 percent of them do.”

But he told his dad, “We’re never going to find a professional baseball team that will let us do this.”

However, he found one in the Jamestown Expos. Why Jamestown?

One of his producers went through a list of Class A baseball teams not located on either coast. One of the four was Jamestown and after all four were contacted, Funt picked the Expos.

“I was sensing this club was willing to go the extra mile,” he said. “I had a warm feeling here. I couldn’t have asked for a nicer reaction, all the way up to Montreal.”

Funt said the film clip, which will be edited down to about three minutes, will be run on a “Candid Camera” special about sports, scheduled for Oct. 4, before one of the major league playoff games. The tape will include WJTN Radio’s Pete Hubbell and Skip Pierce, who knew nothing about the prank, broadcasting a play-by-play as if it were an actual baseball game. Their befuddlement was the clincher that makes the prank funny enough to be on national TV, Funt said. Some of their comments will be part of the broadcast on Oct. 4.

Funt handled his umpiring role well and he gave a lot of credit to the regular umpires.

“I paid a lot of attention to Russ (Heller, who worked behind the plate in the first game),” Funt said. “I was lucky there was an unexpected twin bill tonight.”

Funt, who played baseball in high school, added that after watching Baxter warm up, “I forgot how fast these guys throw.”

“I’ll remember this one for a long time, I guess,” he said.

And he can relive it with all of us in October.