‘No Need To Panic’

Schools To Close After State Of Emergency Declared 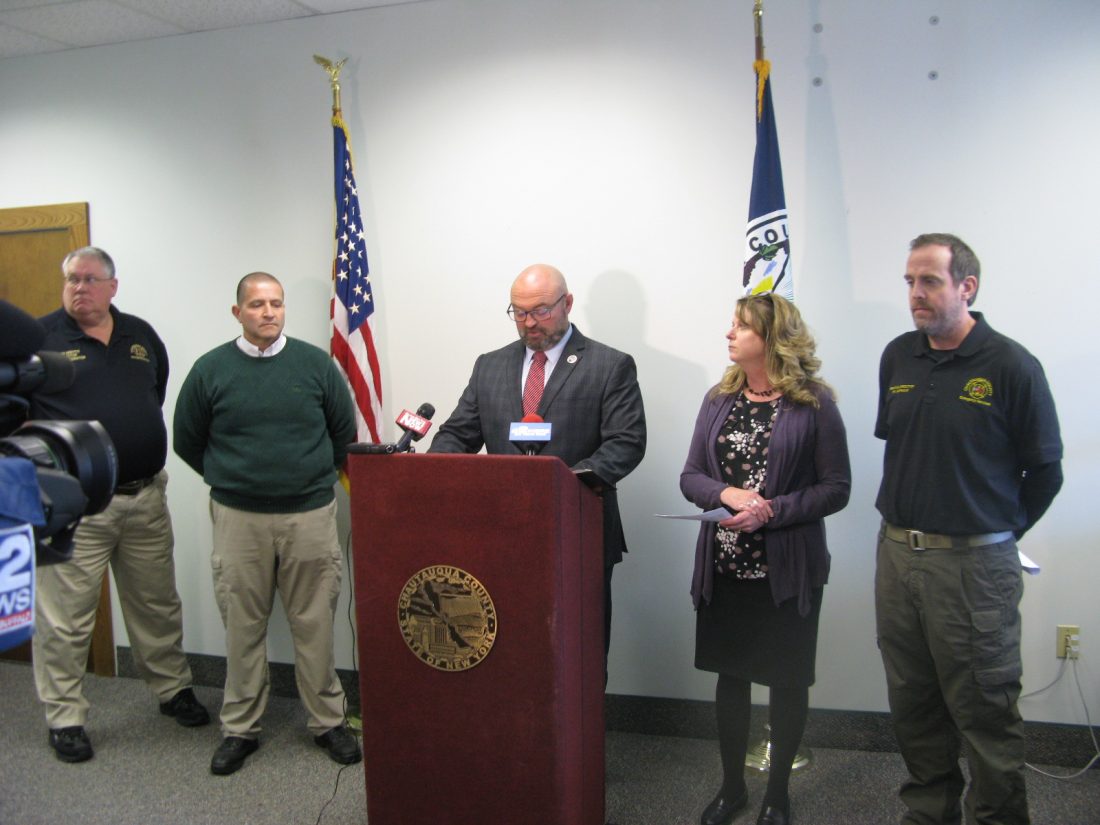 MAYVILLE — A local state of emergency declaration Sunday afternoon and a recommendation from top Chautauqua County officials prompted schools to announce their closure for at least a month as concerns over the spread of the COVID-19 coronavirus continue.

No cases of the virus have been confirmed locally, though seven were reported in neighboring Erie County as of press time.

“There is no need to panic,” County Executive PJ Wendel said during a press conference in Mayville. “We want to make sure that everybody remains calm. What we are doing here is remaining vigilant as a county and preparing for the future.”

“Although there are no confirmed cases within Chautauqua County to date, this situation is rapidly evolving,” Wendel said, “and the threat of this virus is imminent to the citizens and visitors of Chautauqua County.”

Shortly after the county executive’s comments, the Jamestown Public Schools District announced that all classes would be canceled beginning today.

“At this time classes are not expected to resume until Monday, April 20,” the district said in a statement. “While there are not yet any confirmed cases of coronavirus in our county, it is important that we all work together as a school family to slow the spread of the disease in order to prevent people from becoming ill. Over the coming weeks, out staff will provide essential services to support continued learning at home, child care and access to school meals.”

Jamestown Mayor Eddie Sundquist will hold a press conference at 10 a.m. this morning with Dr. Bret Apthorpe, JPS superintendent, to discuss citywide preparations and the school districts’ “plan to ensure children are safe.”

Other school districts also announced that classes would be canceled this week.

The decision came at the urging of county health officials, noting the need to limit the spread of disease among students in confined spaces.

“One of the things I want to remind people of, again, this is not to start any sort of panic,” Wendel said, noting that more than 40 counties have declared states of emergency, including in Erie and Cattaraugus counties. “Not every county has a positive case.”

A Chautauqua County COVID-19 response team has been created, comprised of county officials including Wendel; Christine Schuyler, county director of health and human services; Sheriff James Quattrone; and John Griffith, county director of emergency services, among others. The county executive said the team will meet on a daily basis to stay up to date on the virus.

Among the items noted during the press conference were Gov. Andrew Cuomo’s policy of “social distancing” and 50% occupancy requirements for statewide establishments including restaurants and bars.

“I am very understanding and sympathetic to our local businesses,” Wendel said, “and this decision was very challenging because this not only affects our school districts but it greatly impacts the economic engine throughout Chautauqua County.”

Schuyler said as of Sunday evening, two county residents were in “precautionary quarantine.” She said four people countywide have been tested for the virus, with three tests coming back negative and the fourth pending.

“While there are no positive cases in our county, I do feel that it is inevitable,” Schuyler. “This is a pandemic. The COVID-19 disease is here in our state. It’s in our neighboring states and it will come. That’s what a pandemic does. That doesn’t mean that we have to be panic about it because most people who get this disease are going to be very mildly ill.”

The health commissioner said the public should be mindful of protective measures, most notably washing hands frequently with soap and water, as well as covering coughs and sneezes and staying home when sick. She said with schools closed, students should stay home and not out and going to restaurants or attractions.

“We need to stay home,” Schuyler said. “We need to hunker down, keep everybody as healthy as we can, and get through this. And we can do that.”

As for testing, Schuyler said the issue has been laboratories capable of handling each swab. Currently, all tests — which come on the referral of a doctor — are taken to the Erie County Health Department lab.

“Once more labs are brought online in New York state, that will increase the ability to actually run those tests,” Schuyler said.

Common symptoms of the coronavirus include fever and coughing and sometimes can mirror the common cold or flu. Dr. Michael Faulk, county medical director, said older adults and those with chronic medical conditions, including heart and lung disease, diabetes and those with weakened immune systems, appear to be at a higher risk to develop more severe complications.

Chautauqua County Sheriff James Quattrone, meanwhile, asked county residents to “exercise respect and be considerate of others, recognizing that we do not need to panic. We can go to the store and do our normal shopping.”

“Our goal is the health and well-being of all of county residents,” he continued.

Quattrone asked that the local 911 system not be overburdened for coronavirus information, noting resources can be found at the county and state health department websites as well as a hotline: 888-364-3065. He said all contact visits at the Chautauqua County Jail have been suspended until further notice.

UPMC officials announced Saturday that a test for the coronavirus has been developed and will be used to diagnose select, symptomatic cases. The organization plans to “rapidly increase” testing capacity at its central laboratory, with the ability if need be to test hundreds of patients per week in the near future.

“Developing this test for a never-before-seen virus in the midst of a pandemic was a tremendous challenge, even for our academic medical center with its long history of such developments,” said Dr. Alan Wells, medical director of the UPMC Clinical Laboratories and Thomas Gill III Professor of Pathology at the University of Pittsburgh School of Medicine. “But testing capabilities are absolutely essential to managing a pandemic. If the communities we serve see a surge in severe illnesses, we must be able to diagnose people quickly to give them the appropriate care while protecting our staff and the broader community.”

Additionally, UPMC on Tuesday will begin directing patients with symptoms consistent with COVID-19 to a specimen collection site in Pittsburgh’s South Side neighborhood. The site is not open to the general public; patients must have a physician referral approved by UPMC’s infection prevention team and an appointment to have their specimen collected for testing by either UPMC or public health authorities.

UPMC will later open additional specimen collection facilities in Harrisburg, Erie, Williamsport and Altoona in Pennsylvania at an as-yet undetermined date after gaining experience with the South Side facility and after UPMC’s testing capacity increases.