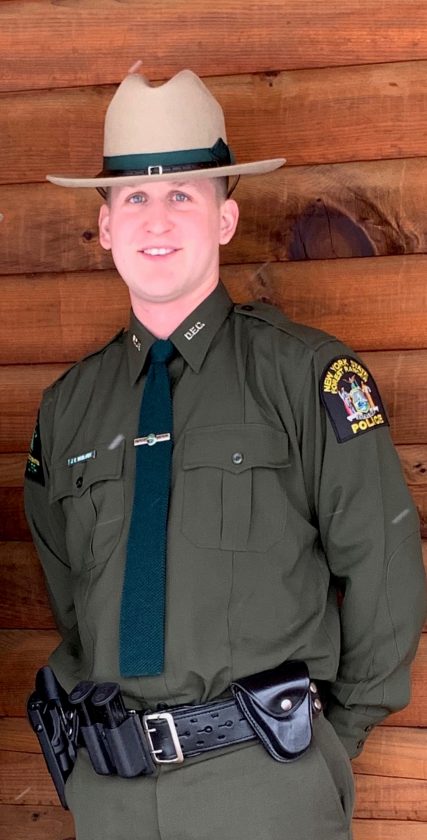 Along with 30 Environmental Conservation Police Officers and 13 other Forest Rangers, he received his diploma in a formal ceremony at the Exposition Center at the New York State Fairgrounds, in Syracuse, Dec. 6.

The Randolph native is among 44 new officers from the New York State Department of Environmental Conservation’s 22nd Basic School for Uniformed Officers to graduate. He joins 142 members of the state’s DEC Division of Forest Protection.

“Forest Rangers and Environmental Conservation Police Officers work in communities across the state to protect and preserve New York’s abundant natural resources,” Cuomo said. “I congratulate the men and women who graduated today and am confident these officers will carry on New York’s rich tradition of environmental stewardship as they protect the health and safety of New Yorkers and visitors alike.”

The graduating class joins the ranks of 275 ECOs and 131 FRs currently serving across the state. Recruits in this newest class were selected from an eligible list of qualifications and passing scores generated from the most recent Civil Service exam, which was given in 2016.

To find out more, visit the DEC’s website at dec.ny.gov.

Originally known as Fire Wardens, Forest Rangers were established in 1885 with the creation of the Forest Preserve. Their duties focus on protecting state lands and forests and include search and rescue missions, wildfire suppression and educating the public on the safe use of state lands.

A passion for hunting, fishing and camping led Skudlarek to this career which, he said, will give him the opportunity to be outside and interacting with other people who are doing the things he enjoys most. His father introduced him to hunting and fishing as a kid growing up, which inspired him to like the outdoor activities and enjoy it so much.

“(He) actually put the thought of this career in my head when I was in high school,” he said. “That is why I went to college for environmental science — because I saw that type of degree could get me into this type of job, which was my goal.”

According to Skudlarek, once the recruits are done with the academy or nearing towards the end, they get to bid on two vacant locations in various counties throughout the state. They are then assigned to a county where they establish residence.

Skudlarek said Forest Rangers are responsible for the enforcement of fish and wildlife laws on state lands and dealing with the people who are violating those laws. They also educate the public on the safe use of state lands.

Lori Servino, public information officer from the DEC’s Office of Media Relations said another big thing the rangers deal with, particularly in the Adirondack Region, is a lot of search and rescues of people who are out hiking on the trails and get injured and/or lost in the woods.

“Search and rescue is a big part of their job, and the rangers have a lot of special equipment and training for that job,” she said. “If there is an emergency incident, the rangers respond and usually work with volunteer fire departments and county emergency response teams.”

At age 29, Skudlarek has started his dream job as a Forest Ranger in Schoharie County, just west of Albany, where he will be living and working. Now that he is out of the academy and has his assignment, he is required to do a two-month training portion where he will ride along with a veteran officer for eight weeks.

“I’m looking forward to being outside throughout the whole year,” he said. “There are not a lot of jobs that let you be out (there) working with people who are recreating and doing the things you enjoy.”

A graduate of Randolph Central School, Skudlarek received his Bachelor of Science in Environmental Science at the State University of New York at Fredonia. He’s been employed as an Environmental Coordinator at American Refining Group, Inc., in Bradford, Pa. where he did environmental compliance work.

Skudlarek is the son of Nanette and Chad Skudlarek of Randolph. He has a sister, Samantha Cooley.