Usher In The Season 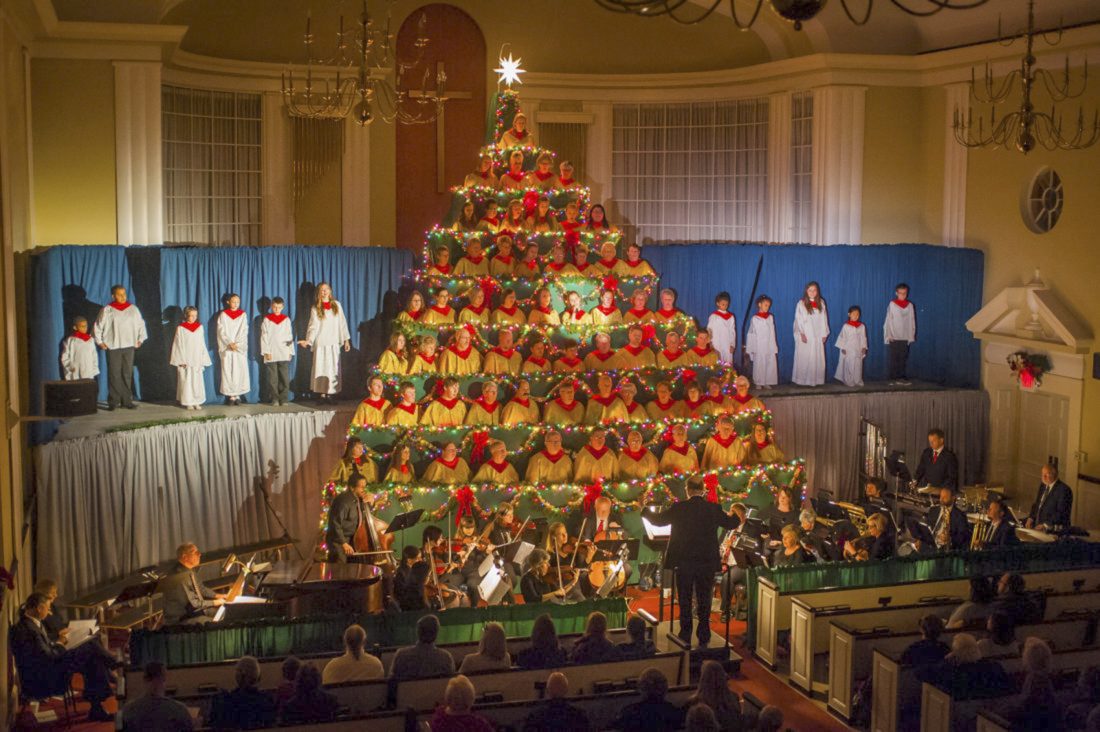 The Living Christmas Tree is going out on a high note.

And, after Dec. 8, the festive holiday tradition will cease production.

According to Chairwoman Kaye Young, it wasn’t any one factor that played a part in the decision to end the celebration.

This year is its 35th anniversary.

“We just feel like it’s a good stopping point when things are at a high point,” Young said. “We have been sort of looking at this 35th anniversary as a real milestone for us. This is a huge production and a huge amount of work. We have had some dwindling numbers and some changes, so we have always said we want to go out on a high note. We don’t want it to fizzle out. We don’t want people to say ‘They should stop that. It’s not very good and that kind of thing.’ So we’ve always very carefully watched how things have been going.” 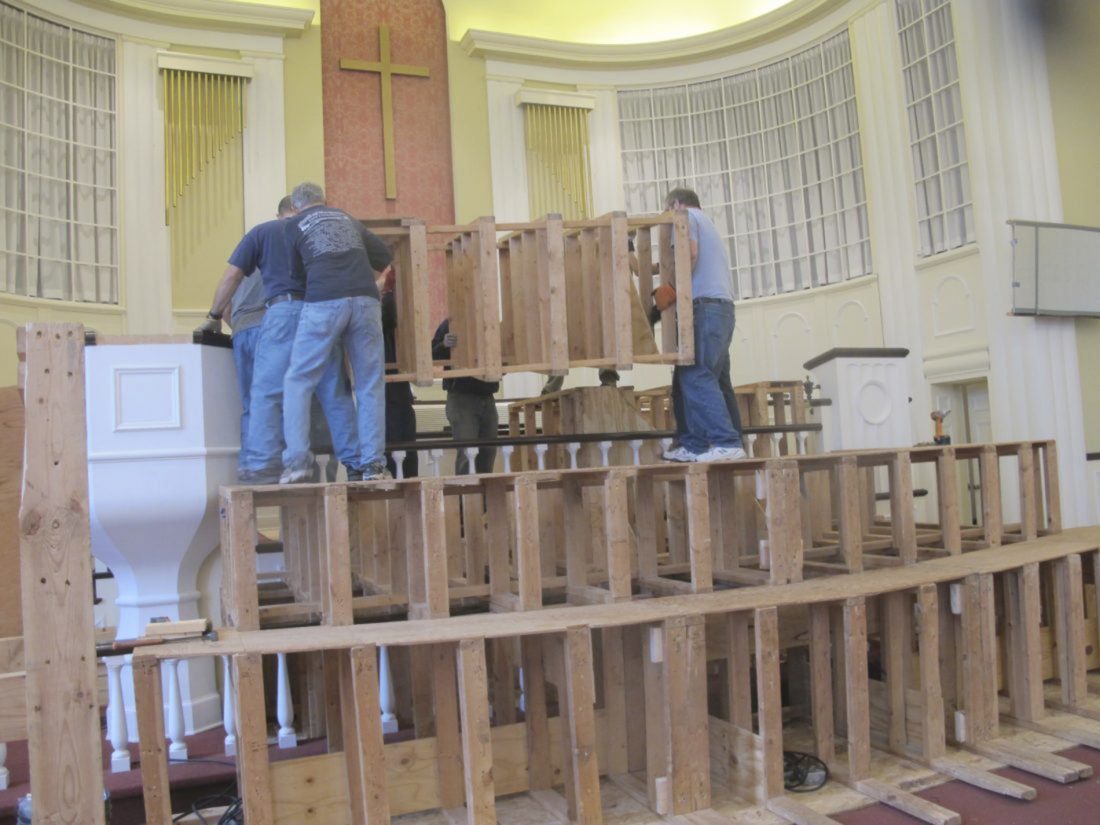 Director Brian Bogey has announced his retirement, but Young said, that was one factor, but not the main factor for closing the production. She said the show started with the intention of trying for at least a year or two. “Here we are 35 years later which is pretty amazing that we have kept it going that long,” the chairwoman said.

Young added that the production is more than just getting a choir to sing in a 30-foot tree accompanied by an orchestra. “The manual labor side of this is big. This is a huge structure. It takes up an entire semi (truck) trailer,” Young said.

The whole set, Young said, has to be unloaded, carried in, assembled, built, secured, reinforced, fixed and repaired. Then it has to be unassembled, carried all out, loaded back into the truck. “That’s a lot of manual labor to get people to do that,” she said. “It’s been harder for us to get some support there. There are a number of factors that made us say ‘Well, maybe we are at a good point.’ There is a time and a season for everything.”

“To commemorate this milestone, we will be presenting the cantata, ‘The Sounds of His Love,’ which was performed the first year. A choir and audience favorite, it contains many familiar carols and other songs. A 60-voice choir, along with an orchestra, youth choir, and pageantry, will present the Christmas story,” Young said.

“It has been an honor for me to have been the conductor of the Living Christmas Tree Choir for the past 12 years,” Bogey said. “It has ushered in the Christmas Season for hundreds of area residents and has been an inspiration to many. It has been a privilege to have been associated with such wonderful people before me that have pioneered this great project from the very beginning including Russell Johnson, director for 11 years, and Joanne Johnson, Clayton and Janet Berlinghoff, who created and organized this major choral production 35 years ago. Also to Norman Lydell who so capably carried on the tradition as director for another 10 years of the Living Christmas Tree.”

Young noted that maybe something else may be in the works. “Truly, the whole city has supported this with many, many community people involved in it. Many people see it as the kickoff to the Christmas season. There will be sadness and mourning over it not being there but who is to say something else might take its place,” she said.

Each year notices are sent to area church choirs looking for singers. There are no auditions and it’s an open recruitment. In May and June the music is selected. Each year choir rehearsals begin around the third week in September, and then the orchestra begins Nov. 1. About three weeks prior to the first performance choir and orchestra meet and practice together, Young said.

“My favorite part of the production is seeing people’s faces when we start to sing and people in the audience, and their reactions. There are many parts that I enjoy. It’s great in September to come back and see people that you don’t see often. During the year, I’ll run into people in the grocery store or somewhere that sing in the tree that I don’t see in other circles. I think that connection has been great. I think the response from the community always has been very positive,” she added.

“I think my favorite part of the Living Christmas Tree production is the final choir number entitled ‘I’m Trying to Be Like Jesus.’ It is a sort of benediction on the whole choir and congregation and it is the essence of what Christmas and being a Christian is all about,” Bogey said. “Also this year, I am also thrilled that we are performing ‘Ten Thousand Joys’ which is part of the original cantata ‘The Sounds of His Love.’ This vocal duet will be sung by Pastor Adam Rohler and Gail Grundstrom, who will be coming in from North Carolina to be a part of this final Living Christmas Tree production. This duet is supported by the full choir singing in the background and it is a very moving and thrilling moment during the presentation of our cantata.”

The production is not limited to people in Jamestown, but rather, Young said, participants have come from north Chautauqua County, Cattaraugus County, and Warren County, Pa. “Over the years, 408 people have sung in the tree, and 204 people have played in the orchestra. We estimate at least 50,000 attendees,” Young said.

Bogey also expressed his gratitude to Carol Kindberg, Young, Kris and David Paterniti for their many years of leadership for this event. “Without them this beautiful production would not have taken place,” Bogey said. “Special recognition should go to the many dedicated people who every year put up the tree, dismantle it, and store it in the off season. It is a huge task. Also thanks to our wonderful choir members whose faithfulness is an inspiration; to our outstanding orchestral members whose music supports and uplifts everyone present. I also would like to extend my sincere appreciation to our wonderful narrators, pageantry participants, choreographers and dancers, back stage managers, cooks, ushers, and especially to the people of our community who have supported the tree year in and year out. Thank you for making this an experience that we shall always appreciate and cherish in the years to come.”

Tickets are $7 and may be purchased at First Covenant Church, Ecklof’s Bakery, Farm Fresh Foods, Lakewood Apothecary, Peterson Farms, and Quilter’s Haven. Online tickets are available at firstcovchurch.com for $8. After Dec. 5, tickets will only be available at the church.