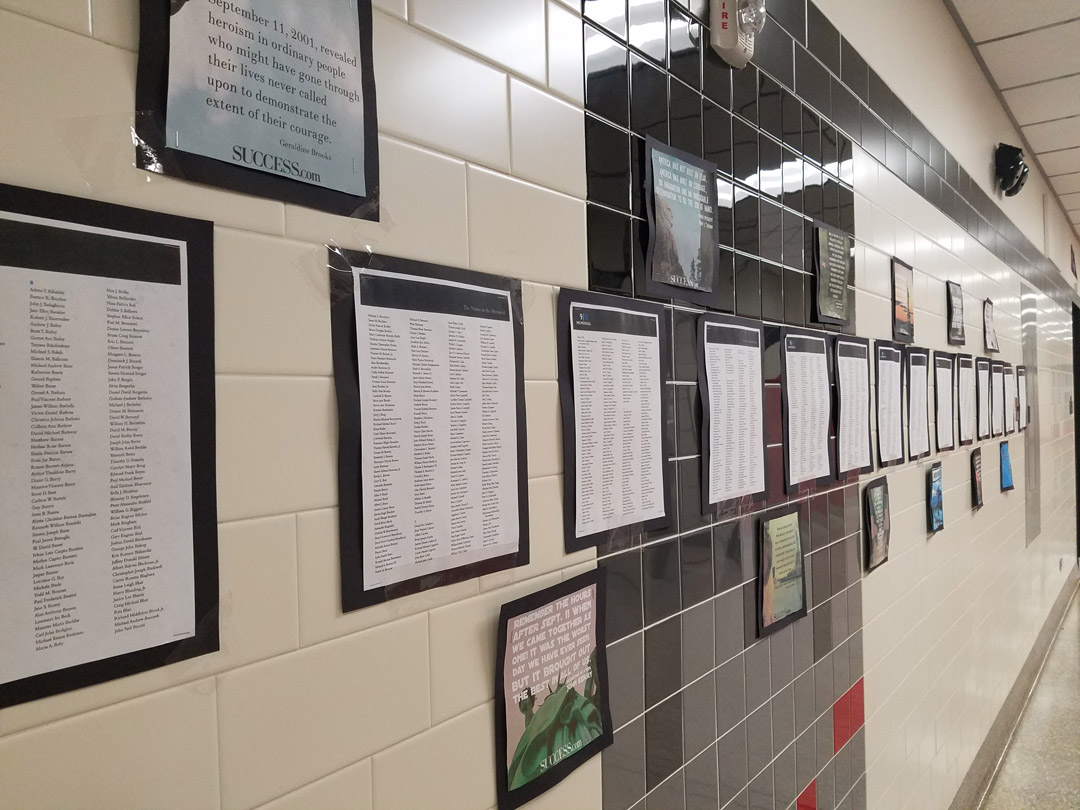 The events of 9/11 are continually taught in public schools as a reminder and a method of never forgetting those who died. Maple Grove High School posted about 15 pages of all the names who lost their lives on Sept. 11, 2001. Submitted photo

The class of 2020 will generally be viewed as the final group with students who were alive Sept. 11, 2001. For Julie Verdonik, Maple Grove principal, it’s important now more than ever that those who died then are remembered today.

About 15 pages of more than 3,000 names have been posted throughout Maple Grove High School in an effort to ensure that those who died as a result of the 9/11 attacks are not forgotten. Verdonik said it’s equally important that the students who weren’t alive or were too young at the time are made aware of the historic tragedy.

“I want the kids to have a feeling of what happened that day,” Verdonik told The Post-Journal.

A moment of silence and a corresponding announcement are scheduled at each of the times a plane crashed on 9/11 and killed Americans. The announcement will be read by 18-year-old Jake Tomlinson, a high school senior.

Tomlinson doesn’t remember the events of Sept. 11, 2001, first-hand because he was far too young. In fact, it was the day he was born.

Following the 9/11 attacks, Christine Pisera Naman, an author from Pittsburgh, Pa., selected 50 children, one from each state, who were born that day to be included in a book called, “The Faces of Hope.” Tomlinson was selected to represent New York state.

At various periods in his life he has traveled to New York City where ceremonies have been held with the 49 other children and families selected to be in the book.

At the age of 13, Tomlinson spoke to a crowd filled with thousands of people in NYC. It was there, when he was older, that he could begin to grasp the full scope of what took place on his date of birth.

He heard testimonies from survivors, impacted families, and first responders telling their side of the story.

“There were people there who were involved with it directly. It was an eye-opener,” he said. “From then on I had a better understanding.”

Most recently, Tomlinson traveled to NYC for another event this summer. He met with those who also share a birthday with “one of the biggest tragedies in U.S. history.”

Now, all likely going into their final year of high school, Tomlinson said he was able to develop stronger relationships with the people he’s visited at different points throughout out his life. Tomlinson said he believes the idea of the book coincides with bonds he’s now created.

“It was obviously a very sad day but the point of this book is that there’s good in everything — even in the worst things,” he said.

Maple Grove isn’t the only school taking time to remember 9/11. In Jamestown, students in Gina Hess’ fifth grade class at Jefferson Middle School are being taught about tolerance, compassion and the heroic actions of Americans. Students in Hess’ and fifth grade teacher Rebecca Rupolo’s class will study the timeline of events to better understand how 9/11 unfolded.

“It’s more about the tolerance and the compassion piece of it,” Hess said. “We teach them that those people were strictly targeted solely because they were Americans.”

Hess noted that while her students weren’t alive during the attacks, each year they are sympathetic and often ask why 9/11 ever happened.

“We just wanted to instill some sensitivity toward the remembrance of 9/11 and talk about why we are remembering those people who were victims in those attacks,” Mason said.

Mason said the primary goal for her class is to simply raise awareness among her young students who may not fully understand what actually happened in September 18 years ago.

Both teachers said that the overall goal is to remember what happened and honor those who died so that a similar tragedy can hopefully be avoided.

Gov. Andrew Cuomo signed legislation Tuesday to allow for a brief moment of silence in public schools at the beginning of the school day every Sept. 11 in order to encourage dialogue and education in the classroom.

“9/11 was one of the single darkest periods in this state’s and this nation’s history, and we owe it to those we lost and to the countless heroes who ran toward danger that day and the days that followed to do everything we can to keep their memory alive,” Cuomo said. “By establishing this annual day of remembrance and a brief moment of silence in public schools, we will help ensure we never forget not just the pain of that moment but of the courage, sacrifice and outpouring of love that defined our response.”