The Jamestown Fire Department’s ambulance pictured Friday inside Station 1 at the city municipal building. Mayor Sam Teresi said city officials are examining the possibility of providing an ambulance service due to the “gearing down” of responses from Alstar EMS. P-J photo by Eric Tichy

The Jamestown Fire Department responding to a call along West Third Street on Friday. P-J photo by Dennis Phillips

The Jamestown Fire Department’s ambulance pictured Friday inside Station 1 at the city municipal building. Mayor Sam Teresi said city officials are examining the possibility of providing an ambulance service due to the “gearing down” of responses from Alstar EMS. P-J photo by Eric Tichy

Because of a “gearing down” in the calls Alstar EMS responds to, city officials are examining the possibility of providing an ambulance services for the community.

On Monday while rolling out the Smart City Capital Investment Program, Sam Teresi, Jamestown mayor, said the plan will include the purchase of two new ambulances at the cost of $200,000 each. The plan also includes the construction of a central maintenance facility on Crescent Street that would also house the ambulances if the city was to start providing the service once again.

Teresi told The Post-Journal the city used to provide ambulance service, which ended in the late 1980s when Jamestown General Hospital closed.

Teresi said since the 1990s, however, the former WCA Hospital, now known as UPMC Chautauqua, with a division known as Alstar EMS, has been the primary provider of EMS transport in the city. He said the Jamestown Fire Department has never been the primary ambulance service provider for the city. 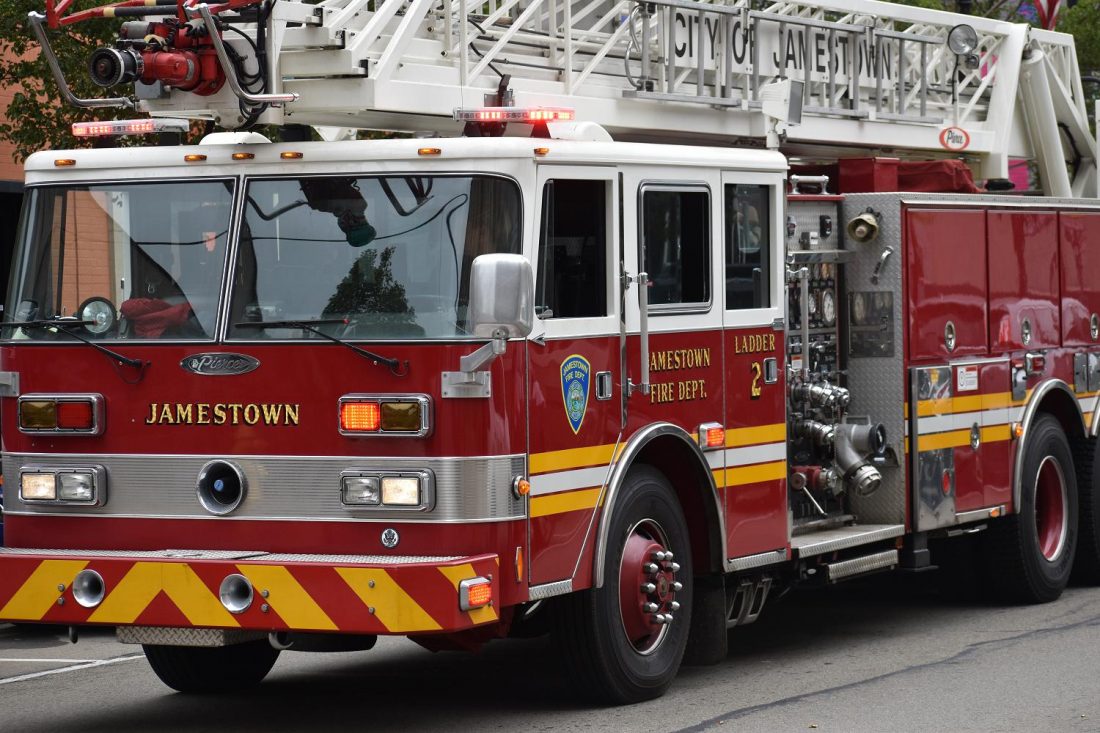 The Jamestown Fire Department responding to a call along West Third Street on Friday. P-J photo by Dennis Phillips

“The primary provider has always been a separate, usually private, company and the fire department provides backup in a pinch service,” he said. “In a pinch, the Jamestown Fire Department would respond in an as needed basis. When Alstar is out of service doing other things or out of service simply because multiple events are happening at one time, that is when the fire department jumps in during an absolute emergency, in the pinch type of a filler role.”

However, in recent years, the number of ambulance calls the Jamestown Fire Department answers has increased “significantly” because Alstar has steadily reduced its service, Teresi said.

“The bottom line is Alstar, first under WCA and now under UPMC, has steadily been reducing transport service in city and throughout the county and that has put undo pressure, not just on Jamestown Fire Department, but also in Dunkirk, Fredonia and essentially every volunteer department in Chautauqua County,” he said. “As they have been reducing their service, the Jamestown Fire Department has been put up against the wall and had to pick up the slack. It’s becoming increasingly problematic. Throughout the county, it’s becoming a crisis. It’s become even more stressful and a crisis mode elsewhere in the county. It’s a serious problem a lot of folks are working on because it is a literally a life and death issue.”

In February during a Chautauqua County Legislature committee meeting, Dave Thomas, WCA Services Corp. executive director, said in 2018, his organization, which operates Alstar EMS, received 20,000 calls and could answer only 16,000 because of a lack of staff. He said part of the problem is Alstar lost EMS workers when the county started its new emergency medical services program — also known as “fly-cars” — in August 2017.

“There is always a possibility that they might get out of the business. They have not threatened that or communicated that, but we need to be prepared because if that time comes, because business can excuse themselves from the arena, we have to be prepared,” he said. “We hope it doesn’t happen. We don’t seek to get into the business again, but the fact remains, given the current situation and the stress it’s putting on our professional department and the volunteer departments in the county, something is going to give.”

On Monday, union leaders for the Jamestown Professional Firefighters Association IAFF Local 137 criticized Teresi for allowing the fire department to be understaffed. The city’s fire department has 50 firefighters currently, but would like to see an increase of 13 to 15 to handle the increase in calls.

In 2018, the fire department responded to 5,528 total calls, which included structure fires, EMS calls, car crashes and requests for service. That was an increase from 5,159 calls in 2017.

Teresi said this is why city officials are examining the possibility of providing ambulance services once again, which would be separate from the calls the Jamestown Fire Department handles.

“(The Jamestown Fire Department) has been under increased pressure,” he said. “We do recognize it and we do care about it. We are taking the steps to do something about it if the situation continues to deteriorate, or God forbid, if UPMC doesn’t want to be in that line of work.”

The start-up cost for the ambulance service is included in the $13.9 million Smart City Capital Investment Program, Teresi said. This would provide the city with two ambulances and a new facility to operate the service from.

As for the operational cost, Teresi said city officials are finishing up the business plan, which will then be released to the public. He said the business plan would include fees that would be charged to Medicare, medicaid and insurance carriers. He added if the fees being charged to generate revenues don’t exceed the cost of operations the additional funding would need to come from the city’s budget.

“We are putting together a contingency plan because we can’t leave the people and business owners of the community with out this service,” he said. “This is a ‘break the glass’ type of a situation. We hope UPMC will stay in business and bring its service back up to the levels that they were at, but we are ready with the capital portion and, in the near future, we will come out with operational plan if we have to do this.”