The demolition of 24 N. Main St. started Wednesday afternoon. Vince DeJoy, city development director, ordered an emergency demolition of the building that had been ravaged by a fire damage in 2017. P-J photo by Dennis Phillips 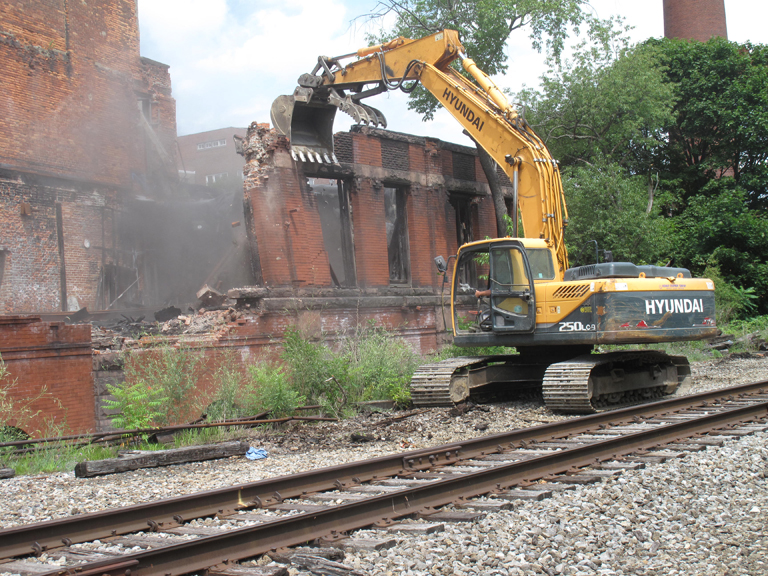 The demolition of 24 N. Main St. started Wednesday afternoon. Vince DeJoy, city development director, ordered an emergency demolition of the building that had been ravaged by a fire damage in 2017. P-J photo by Dennis Phillips

Two years after a fire ravaged a North Main Street building, city officials declared an emergency demolition to tear it down.

HH Rauh Paving performed the emergency demolition, beginning in the rear of the building and working toward North Main Street. The project will cause a temporary closure of the sidewalk on the east side and North Main Street between First Street and the railroad viaduct.

“It’s a mess. Every rain storm, it’s falling down. There is literally nothing supporting it. The roof has collapsed,” DeJoy said. “People have been breaking into the building and we can’t risk someone falling into that area and potentially dying. It became time for it to be taken out. It was going to be demolished anyway.” 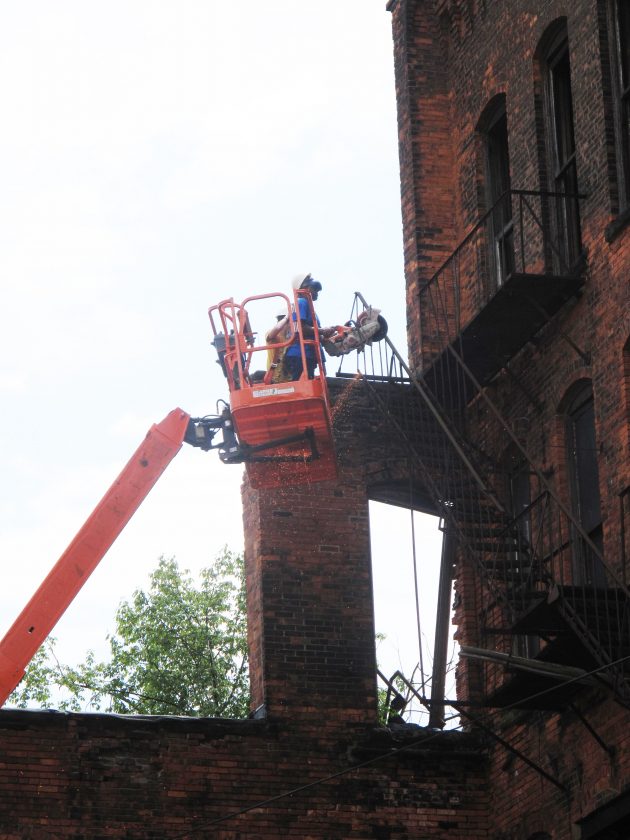 “Structurally it could not hold up and it could collapse, which could create even more of a nightmare.”

Last year, city officials received a $100,000 State and Municipal Facilities Program grant to facilitate the demolition of 24 N. Main St. In June 2017, a fire occurred at the building, which is located next to the railroad overpass in downtown Jamestown. Since the fire, city officials have researched ways to either stabilize the structure, which is next to the Arcade Building, or tear it down. DeJoy said since the fire, the building was regularly inspected to determine whether it should be demolished.

“We have a list of condemned properties we regularly check. The ones like this generally far more often,” he said. “We’ve been actually observing this one every time we go into Arcade Building to make sure that building is still sound. By looking out the windows, you could see how 24 N. Main St. has deteriorated significantly since the time of fire.”

“This way we will be able to reopen the sidewalk. We’re going to move the Jersey barriers and have covered scaffolding to have both sidewalks open,” he said.

DeJoy said the Arcade Building is still a concern for city officials.

“It’s got issues. I’m not going to sugarcoat it,” he said. “We’re just praying that it doesn’t collapse. We are watching it closely. Demolition would be extremely expensive and would cost a lot of money that the city doesn’t have.”

Since the fire at 24 N. Main St. in 2017, city officials have been working to try and find a solution to stabilize the structures, which also includes the Haglund Building. In 2017, C&S Engineers Inc. was hired by the Gebbie Foundation to create a condition assessment report on the Arcade Building.

According to the executive summary of the condition assessment, all major components were evaluated and assessed on a good, fair or poor rating system. The components evaluated included the site, foundation, building envelope, building super-structure, utilities, mechanical, fire protection and fire alarm.

The Arcade Building, which was constructed in 1898, is in fair to good condition structurally, in regard to foundation and walls. However, due to poor maintenance, upkeep and lack of functioning utilities, there are multiple points of water infiltration throughout the building, which is vacant and abandoned. Over time, the structural integrity of the various floors has become compromised, and in some areas, unsafe. In addition, most windows are broken or missing, which further compromises the weather-tightness of the building.

As part of the study, costs were determined based on three scenarios: demolition, stabilization and renovation. The least expensive option was to stabilize the building. This included making the building weather-tight and to protect it from further vandalism. This evaluation included associated hazardous materials abatement as well as the replacement of the roof, doors and windows, which had an estimated cost of $1,455,000.

The second scenario in regards to cost is demolition. This included completely razing the building, abating all hazardous materials, rendering the site ready for future development. The estimated cost for demolition was $1,708,000.

The final option explored was a full restoration, including bringing the building up to current building and energy codes. For this scenario, a first floor retail space was considered and floors two through four, residential apartments. The estimated cost for the renovations is $16.4 million.