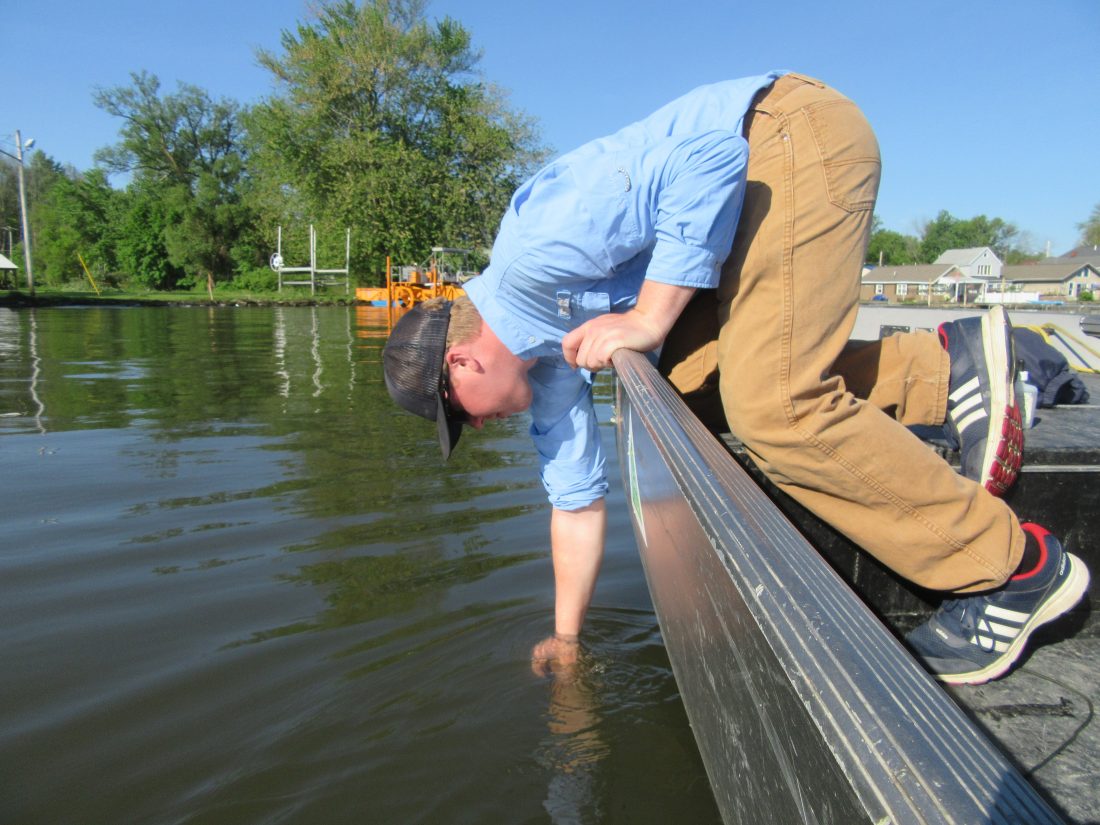 Scott Conrade, an aquatic biologist for SOLitude Lake Management, retrieves a water sample from a Lakewood littoral zone. After treating 400 acres of Chautauqua Lake with herbicides, SOLitude monitored the effects of the chemicals along with Princeton Hydro. P-J photo by Eric Zavinski

LAKEWOOD — Concerns with herbicides Navigate and Aquathol K being used to treat 400 acres of Chautauqua Lake boil down to fear of the unknowns.

Cognizant of that fact with more than four times as many acres of the lake getting treated with the chemicals this year compared to last year’s treatments, Chautauqua County officials wrote into a memorandum of agreement that third-party monitoring would have to take place before, during and after all herbicide treatments on Chautauqua Lake.

Princeton Hydro, an environmental firm based in New Jersey, was contracted to monitor herbicide treatments and their effects this summer. The goal is to understand whether the chemicals have unintended and harmful effects.

SOLitude Lake Management, the company that applied the herbicides, also conducted lake sampling to ensure the chemicals were dissipating normally in the weeks after the May 15, 16 and 17 treatments in Ellery, Ellicott, Celoron, Lakewood and North Harmony waters.

During a period of sample collection May 27, Scott Conrade, an aquatic biologist for SOLitude, told The Post-Journal it’s typical for SOLitude to perform monitoring tests in conjunction with the more thorough work of Princeton Hydro; Conrade said he’s worked on other lakes in the state and region in which both groups have measured the effects of herbicide applications.

Princeton Hydro’s timeline for the monitoring began in early May before herbicides were applied. Concurrent with the applications, records were then retrieved out on the lake. Post-treatment and reporting will continue through the end of August.

A document outlining the scope of the monitoring prefaced the details with a statement that reads: “The services by the independent third-party monitor during the herbicide treatments shall not interfere with the work of the herbicide applicator and New York State Department of Environmental Conservation.”

Once herbicide applications were finished, Princeton Hydro representatives delivered a summary of field observations to the county, and a list of future observations and interpretations are slated to be included in a final report at the end of the summer.

Princeton Hydro will deliver on a similar process of collecting water samples and producing a scientific report on what is found as the summer months go on. The county is also asking Princeton Hydro officials to give recommendations on the project to improve the monitoring process for future years’ herbicide applications on Chautauqua Lake.

The firm will also be reporting to members of the Chautauqua Lake and Watershed Management Alliance as monitoring continues.