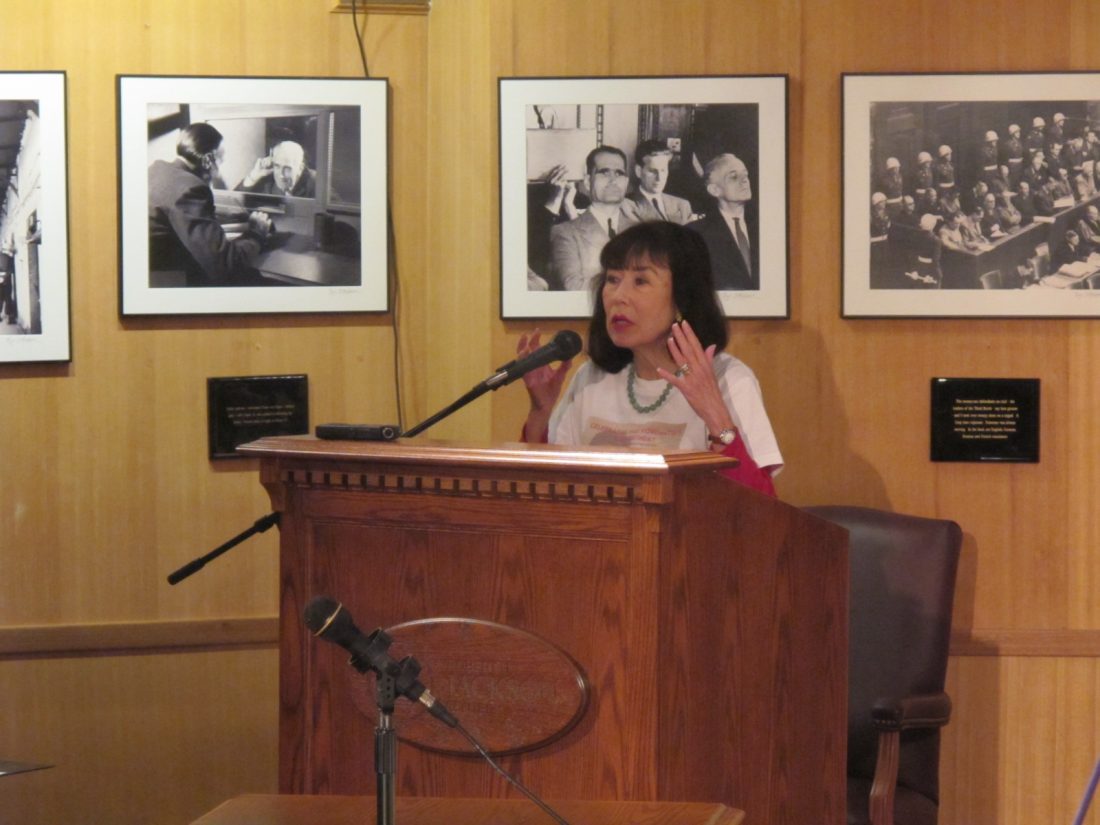 The Korematsu legacy of fighting for civil liberties and the Constitution carries on.

On Tuesday, Karen Korematsu, civil rights advocate, spoke at the Robert H. Jackson Center to commemorate the 75th anniversary of the U.S. Supreme Court decision Korematsu vs. the United States.

Fred Korematsu, Karen’s Korematsu’s father, was an American civil rights advocate who objected to the internment of Japanese Americans during World War II. Shortly after the Imperial Japanese Navy launched its attack on Pearl Harbor, President Franklin D. Roosevelt issued Executive Order 9066, which authorized the removal of individuals of Japanese ancestry living on the West Coast from their homes and their mandatory imprisonment in internment camps, but Korematsu instead challenged the order and became a fugitive. Korematsu believed that this was an unconstitutional infringement on his civil liberty.

In 1944, the Supreme Court decided that Roosevelt and Congress did not stretch their war powers too far by choosing national security over an individual’s rights during a time of war. Supreme Court Justice Jackson wrote the dissenting opinion in the case warning of the danger that this executive power presented through the U.S. War Department’s ability to deprive individual rights in favor of national security during a time of war.

Fred Korematsu’s 100th birthday was celebrated Jan. 30, which is also the same day, since 2011, as Fred Korematsu Day of Civil Liberties and the Constitution in the state of California.

Fred Korematsu was the first Asian American in U.S. history who was honored with a statewide day. Karen Korematsu said today the states of Virginia and Florida and in New York City also honor Fred Korematsu.

Karen Korematsu said her father didn’t talk much about the court case.

So much so that she didn’t know about it until a friend was reading a book about concentration camps in America during her junior year of U.S. history and Fred Korematsu’s story was included.

After finding out about her father’s case, she went home and asked her mom, but she said to wait for her father to come home. She said once her father came home he said very little only that the case happened a long time ago and he believed he was right and the government was wrong.

In 1984, the decision in Korematsu vs. the United States was reversed after new evidence was discovered that the U.S. Justice Department withheld information and destroyed evidence during the first case in 1944, Karen Korematsu said.

Karen Korematsu said Korematsu vs. the United States case is still very viable today and compared the Japanese American internment camps with the Muslim travel ban. She disagrees with the U.S. Supreme Court decision in Hawaii vs. Trump that upheld Presidential Proclamation 9645 signed by President Donald Trump, which restricted travel in the United States by people from several nations or by refugees without valid travel documents. She added the Supreme Court’s decision in Hawaii vs. Trump dishonored her father.

“This country was built on the backs of immigrants … we all come from some where,” she said. “My father said in the documentary (“Of Civil Wrongs and Rights: The Fred Korematsu Story.“) ‘If you have the feeling that something is wrong, don’t be afraid to speak up.'”