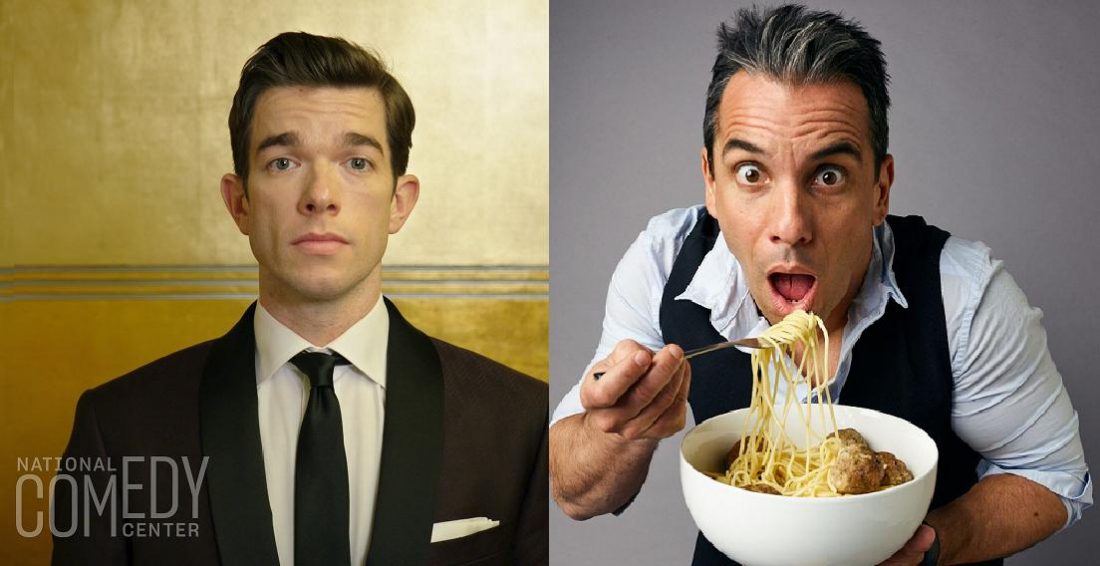 John Mulaney, left, and Sebastian Maniscalco have been named the headlining acts of this year’s Lucille Ball Comedy Festival. The festival will take place from Aug. 7-11.

Two of the nation’s most popular stand-up comedians will headline this year’s Lucille Ball Comedy Festival. John Mulaney and Sebastian Maniscalco are scheduled to perform at Northwest Arena this summer, officials from the National Comedy Center announced today.

Mulaney will perform Friday, Aug. 9, at the Jamestown arena while Maniscalco will take the stage Saturday, Aug. 10.

Journey Gunderson, National Comedy Center executive director, noted that the two are some of the most “in-demand” comedians in the country at the moment. She said having them perform at the Lucille Ball Comedy Festival should be indicative of how the event has grown over the years.

“It’s very challenging for the stars to align in a way that allows these extremely in-demand artists to come to Jamestown, N.Y.,” Gunderson told The Post-Journal. “Both of these names have been suggested by countless fans, and Mulaney has been on our list for years. Maniscalco is obviously having a rare moment as perhaps being one of the hottest working comedians at the moment.”

In a statement announcing the headlining acts, the comedy center said Maniscalco — also a actor and best-selling author — broke records last month with four sold-out shows at Madison Square Garden, selling the most tickets in a weekend for any comedy engagement in the history of the Garden. In 2018, Maniscalco broke similar comedy box-office records for Radio City Music Hall.

The Illinois-born Maniscalco can currently be seen with Viggo Mortensen in the Oscar-nominated “Green Book,” winner of three Golden Globes including Best Motion Picture — Musical or Comedy. Last November, Maniscalco won Billboard’s inaugural Comedian of the Year award. He will be starring in Martin Scorsese’s new film “The Irishman” this year.

Meanwhile, Mulaney began writing for “Saturday Night Live” in 2008, where he also appeared as a “Weekend Update” correspondent and co-created memorable characters such as “Stefon” with Bill Hader. He has spent the past year touring the United States with his most recent show, “Kid Gorgeous,” which was released as a Netflix original special last year and won the Emmy Award for Outstanding Writing in a Variety Special.

“This is a great opportunity to experience the best of live comedy by night, after experiencing the story of comedy — across all eras and genres — by day, with a trip to the National Comedy Center and the Festival,” Gunderson said.

Though known for their on-stage prowess, Gunderson pointed out that Maniscalco and Mulaney have both also received accolades for their work in films. “Getting these two is an indication that this summer is going to be fantastic,” she said.

“This festival is a celebration of all things comedy” said Malachi Livermore, National Comedy Center director of programming and guest experiences. “It offers something for everyone — from a free kids’ comedy show and a series of discussions about the comedic arts, to some of the best stand-up comedians that the nation has to offer, and the opening of an Ernie Kovacs Centennial exhibit featuring never-before-seen archives. And there is still more to come.”

The entire Lucille Ball Comedy Festival will run from Aug. 7-11. Tickets for the headlining performances will go on pre-sale at comedycenter.org for National Comedy Center members on Wednesday, Feb. 20, at noon. Tickets will be made available for sale to the public on Friday, Feb. 22, at noon.

In its statement, officials said the National Comedy Center will once again partner with Chautauqua Institution for a comedy-themed week during the institution’s summer season prior to the comedy festival.

“Events and speakers will explore how comedy changes us and, in turn, society, and the potential of comedy to change minds and influence decision-making,” officials said. Programming details will be released within the coming months.