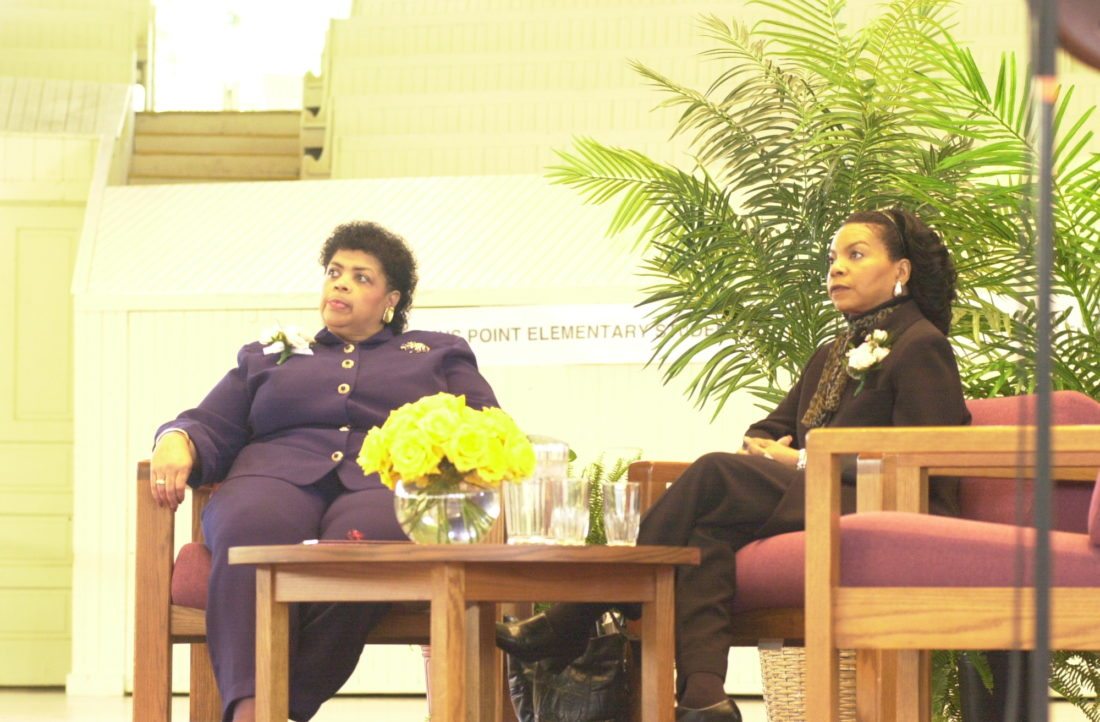 Linda Brown, left, is pictured with her sister, Cheryl Brown Henderson, are pictured during their visit to Chautauqua Institution on April 28, 2004 — commemorating the 50th anniversary of famous “Brown v. Board of Education” U.S. Supreme Court ruling of 1954. The Brown sisters and their father were at the heart of the groundbreaking ruling that declared state laws establishing separate public schools for black and white students to be unconstitutional. P-J file photos

As the nation mourns the passing of Linda Brown, local community members recall her visit to Chautauqua County 50 years after the famous 1954 U.S. Supreme Court ruling that bears her family’s name — and the impact of the vital role she played in the landmark case.

Brown’s death Sunday at age 76 marked the closing of a very important chapter in the proceedings that effectively outlawed racial segregation in the U.S. school system as per “Brown v. Board of Education.” However, nearly 14 years ago, area students and educators had an opportunity to hear Brown and her sister, Cheryl Brown Henderson, speak on their firsthand accounts of the events that transpired in the midst of the case and its aftermath.

The Brown sisters appeared in Jamestown on April 28, 2004, to commemorate the 50th anniversary of the decision at the Robert H. Jackson Center at 305 E. Fourth St. in Jamestown. The sisters were joined by a panel of surviving former law clerks of the Supreme Court Justices who heard the case.

“This was a groundbreaking achievement, to be able to hear from the Brown sisters and these law clerks for the first time, and it was covered by C-SPAN as a national event,” said Greg Peterson, a founding member of the Robert H. Jackson Center, which sponsored the visit.

Peterson said the Jackson Center was able to secure Brown about a year and a half prior to this event, and had originally anticipated having her speak at the center itself. However, the interest became so great the venue was changed to the then-Reg Lenna Civic Center, and again to the Chautauqua Institution Amphitheater when area response to the visit became overwhelming.

“We had unprecedented access to the amphitheater during the month of April, which had never been done before,” he said. “It was such a remarkable feat to not only bring the Brown sisters and these law clerks here, but to bring them to the amphitheater outside of the Chautauqua season. So many people had to think outside the box to make it happen. But the place was packed with students from schools all over Western New York and as far east as Rochester, and we had to string in special cables so Time Warner could carry it as a live broadcast.”

When she was a young girl in Topeka, Kansas, Brown’s father, Oliver, tried to enroll her in an all-white school. She was turned away along with several other black children, sparking the “Brown v. Board of Education” case that challenged segregation in public schools. On May 17, 1954, the Supreme Court ruled unanimously that separating black and white children was unconstitutional because it denied black children the 14th Amendment’s guarantee of equal protection under the law.

“Linda Brown’s parents wanted for their daughter all the gifts that a quality education provides and equal rights that every child deserves,” said Bret Apthorpe, Jamestown Public Schools superintendent. “Over 60 years later, the courage of this 9-year-old girl shines today as Jamestown’s schools enjoy a wonderfully diverse student population. Anyone walking through our schools might see Hispanic children designing bridges in their technology classes; African-American students preparing for Advanced Placement exams; and multiracial students learning how to write computer codes. Jamestown students and faculty celebrate our diverse school family. Linda Brown’s legacy is alive and well in the halls of Jamestown Public Schools.”

According to a joint statement by New York State Board of Regents Chancellor Betty Rosa and Commissioner MaryEllen Elia, the decision paved the way for such opportunities, though there is still work to be done.

“Often, our children show us the way forward,” the statement reads. “Linda Brown was African-American, but the school she sought to attend was for white students only, and the school refused to admit her. In an act of amazing courage, young Linda Brown became the brave face of the movement to integrate America’s schools. The struggle continues to this day. While the Brown decision ended legally-sanctioned school segregation, the vestiges of that segregated system persist today.

“The Board of Regents has long held the view that educational equity is paramount,” it continues. “Today, we mourn the loss of Linda Brown, a young girl who took a principled stand against the forces of injustice. But she serves as a role model for today’s youth as they write the next chapter in our nation’s great history. And her memory emboldens us as we continue to fight for an education system that is truly equitable for every child. That is the enduring legacy of Linda Brown.”

“Brown v. Board of Education” was an historic milestone in the civil rights movement, and is likely the most high-profile case brought by Thurgood Marshall and the lawyers of the NAACP Legal Defense and Education Fund in their decade-plus campaign to chip away at the doctrine of “separate but equal.”