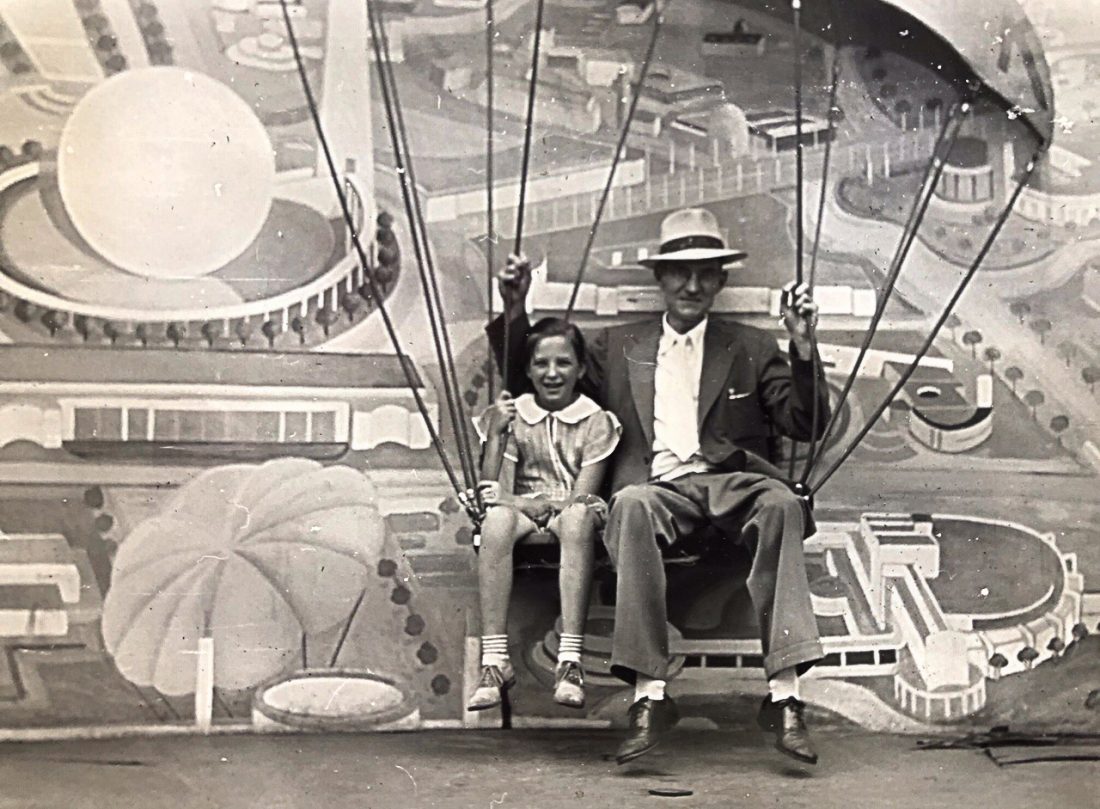 The birth of Mary Ann Marker Carlson took place in Jamestown General Hospital on March 3, 1930. Truman and Ursula Marker moved their family to 13 Walnut Street when their daughter was two years old. Mary Ann remained there until she married and where her mother stayed until the end of her life.

The young girl had two older half-brothers that were much older.

When she was two years old, she became very ill with scarlet fever. Because the family didn’t have a telephone, her father returned from work at the end of each day not knowing if he would find his young daughter alive.

She remembers her family always having a small dog and how she rode her tricycle and scooter while playing in the neighborhood. Her father owned a grocery store across town, at the corner of Hallock and Front Streets. When she was younger, she would stay at the store with her father because her parents didn’t want her to stay home alone. 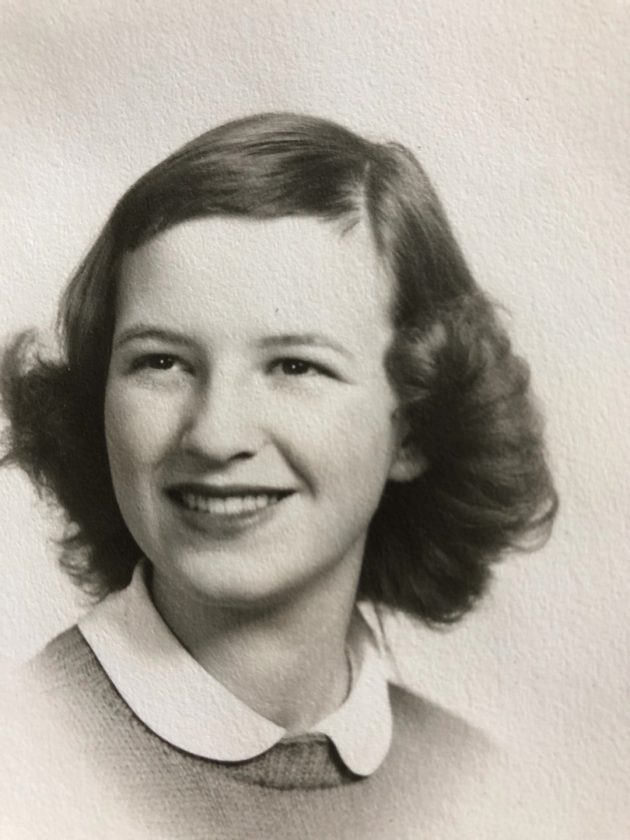 “We always had a car and he delivered on Friday and Saturday. I would go with him and help carry in the boxes.”

“Every Saturday I went around noon to the Popeye Club at Dipson’s Palace (Theater). They showed a double feature, usually westerns, a cartoon and a newsreel. There were lots of cowboy movies with Gene Autry, Roy Rogers and others,” she shared. “It was inexpensive and a lot of kids went. I almost think it was ten cents.”

She told about the first time she was charged the older person’s rate of 35 cents and how she walked back to her father’s corner store because she did not have the extra quarter to pay for her admission.

She was an adventurous child and a bit daring. She spoke about playing ball on a vacant lot at the corner of Maple and Camp Streets. When the ball got away, bouncing into the curb opening to the sewer, a strong boy lifted the closest iron manhole lid and the young Mary Ann would climb into the opening to retrieve the lost ball. Another time, she and a friend ventured into a long tunnel carrying flashlights. She remembers exiting near one of the two Jamestown hospitals.

Later, when she was about 15 years old, she started to help at the family store on weekends. 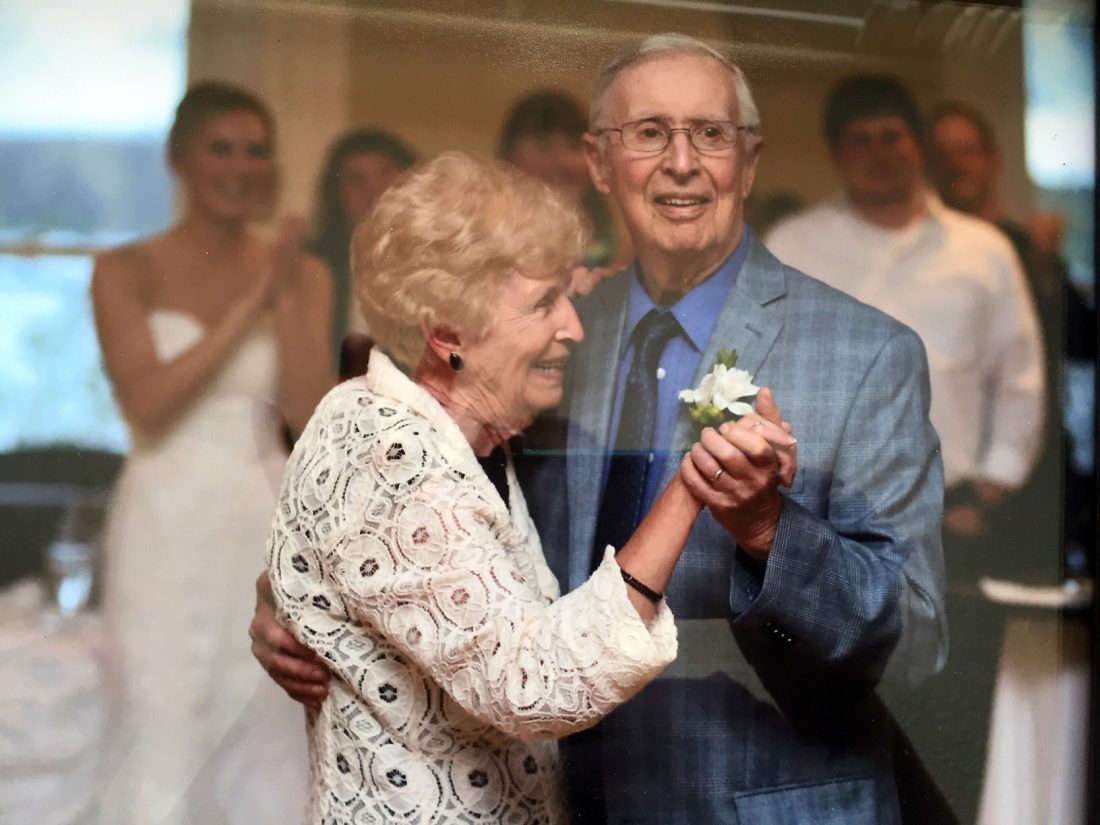 She remembers several events in history that took place when she was a child or a teen, the first being December 7, 1941, the day the Japanese attacked Pearl Harbor. “My parents were wallpapering one of the bedrooms. I didn’t know why they were so shocked.”

When she was 15 years old, President Franklin Roosevelt collapsed and died during his fourth term as president of the United States.

“My brother, Bud Marker, was an Army photographer and was stationed in England. He took pictures of the Nuremburg trials,” she said.

The family has donated the photos to the Robert H. Jackson Center.

For the first seven years of her schooling, she attended Rogers School, starting with half-day Kindergarten sessions.

“We didn’t have much in grade school, but we didn’t know it and everyone else was in the same boat.”

From the elementary school that was very near her home, she advanced to Jefferson Junior High School, which was also a short distance from home. Her mother went to work at her husband’s store after their daughter started junior high school. She later found work at Burns Case Goods after losing her husband when he was just 54 years old. From there she took a job in the office at Holsum Baking Company.

Mary Ann graduated from Jamestown High School in 1948. It was her intention to complete a course offered in night school through Alfred Extension Services, but when she got a call from Jamestown Telephone Company near Easter break, she never returned. From that call she took a job as a telephone operator, which she worked at for about five years.

She enjoyed roller skating at Midway Roller Rink. Since the girls didn’t have cars, little groups of them would stand on street corners holding their skates. The guys would stop to offer rides to the rink in Maple Springs. It was at the rink where the young woman was asked to skate by Clifford Carlson who was from Greenhurst. The couple was united in holy matrimony on Oct. 11, 1952. They started their married life in an apartment on Fourth Street. Carlson worked in an office at Weber Knapp Company where he remained for nearly 40 years. His wife remained at the Telephone Company until their first child was born.

The couple bought a house on Bentley Avenue, just down the road from where Carlson had grown-up.

After the Carlson’s first two children went to school, the mom took a job in the lunchroom at Fluvanna Elementary School for a couple hours per day, but gave it up when she had her third child.

“And then, when he went to school, I went back,” she said.

In the early 1970s, after 17 years in the Bentley Avenue home, the family relocated to Greenhurst where Carlson had started his life.

Many family vacations were taken to Florida during school breaks. The couple traveled to Las Vegas several times after they retired. Carlson passed away in December of 2018. Mary Ann remains active at 90 by driving herself to the YMCA three or four days each week to participate in water aerobics and swimming.

“I have some great neighbors and we have coffee once a week and sometimes play cards.”

She enjoys reading: “mainly murder mysteries.” She is a member of First Congregational Pilgrim Memorial Church, where she has attended for many years.

The nonagenarian has three sons. Jeff is a retired teacher who resides on Fluvanna-Townline Road. Bruce passed away from leukemia when he was 14 years old. Rick lives in Hamburg and works for New York State. There are five grandchildren and four great-granddaughters. There were no girls born in the Carlson Family for 54 years, before this.