Test Your Knowledge Of Area Sports 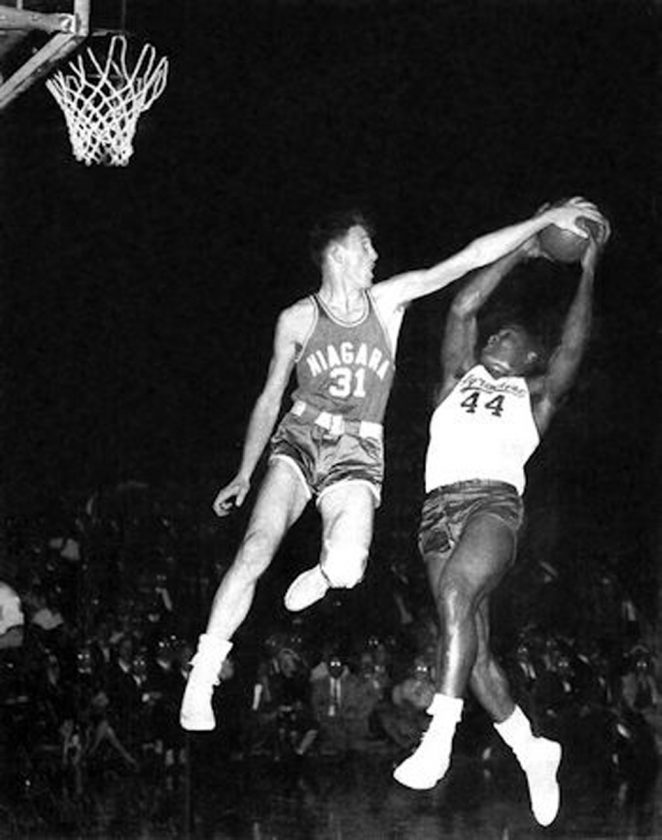 1. Recipient of a full scholarship to play basketball at Niagara University, this Cardinal Mindszenty graduate played in two National Invitational Tournaments and two Holiday Festivals in Madison Square Garden, and was captain of the team his senior season. In photo above, he is seen blocking a shot by Syracuse’s Jim Brown. Yes, that Jim Brown.

2. Known as Jamestown’s “Mr. Baseball,” this man came to love the game at a young age. In fact, one night after the Detroit Tigers were playing an exhibition game against the Jamestown Falcons in the 1940s, he and his father hopped in their car in the parking lot and headed up Falconer Street. Suddenly, the back door of the car opened and some guy jumped in the backseat, yelling, ‘I’ve got to get uptown, I’ve got to get uptown.’ The person in question was the Tigers’ Dizzy Trout. Now, see if you can name the young man who was sitting in the front seat with his dad.

3. In two decades of auto racing, this man racked up 181 feature race victories and 25 track championships on the Stateline-Eriez circuit. “When you’re talking about ‘The King’ of Stateline it will always be (him), as far as I’m concerned,” said local dirt-track historian Randy Anderson.

4. A three-sport star in high school, this Falconer native made a habit of turning in highlight-reel performances on a regular basis. In 1983 and 1984, he was part of the Jock Shop team that won back-to-back national modified softball championships. In 1989, he helped Fudges Sub Shop to another national crown. He was inducted into the Western New York Softball Hall of Fame last year.

5. An all-star shortstop with the Jamestown Falcons in the 1940s, he made a career in baseball as a player, manager, general manager and scout. In fact, in 1976 he signed former Major League player and manager Mike Scioscia to a professional contract.

6. This Dunkirk High School four-sport star went on to quite an athletic career at Fredonia State. A four-year starter in baseball (1957-1960), he never batted below. 420, highlighted by a blistering .553 average in 1958. Oh, and, yes, he was an outstanding high school baseball coach at Fredonia.

7. A dynamite softball player, this Falconer graduate played for the Buffalo-based Shamrocks. Playing third base in a national tournament in the early 1990s against the likes of U.S. Olympians Dot Richardson and Lisa Fernandez, she made quite the impression. So much so, apparently that the Olympians affectionately called her “Hoover” because they could not hit the ball by her.

8. Born in Budapest, Hungary, this man was eventually selected to be part of the Hungarian Olympic gymnastics team. In 1952 at the Oslo Olympics, he finished 25th in the all-around and placed 15th in the all-around at the Melbourne Olympics four years later. He moved to Jamestown in 1960 and, in 1996, was selected the YMCA’s National Coach of the Year.

9. A football, basketball and baseball letter winner at Cardinal Mindszenty High School, he received a full grant-in-aid scholarship to Florida State University to play football. He was a quarterback for the Seminoles from 1971-74, including being the starter in 1973. A longtime college coach, he is currently the offensive coordinator at Grambling State University.

11. This Dunkirk native broke into the women’s satellite tennis circuits during the 1970s in Brazil and England, played in qualifying tournaments for the U.S. Open and French Open in singles and also played in qualifying rounds for Wimbledon doubles, coming within one match of playing against Chris Evert.

12. Holds the Jamestown school record for points in a career (2,259) and a single game (53) and went on to play at Iona College. He is also No. 1 in JHS history in career assists and steals, and is second in career rebounds, despite being only 5-foot-10.

13. This football player led his high school team to four Section VI championships, rushed for 6,449 yards, scored 101 touchdowns and amassed 712 points. Oh, yeah, he had a distinguished career at Michigan State University and played in the NFL, including a stint in Buffalo.

14. Recognized by many as the “father of youth hockey,” this man was responsible for developing boys and men’s clubs in the area, and was a major force in bringing an artificial ice surface into the city of Jamestown. And long before that ice rink — Allen Park — became a reality, he took matters into his own hands and built one himself — inside his barn in Driftwood on Route 430.

15. This track and field coach directed Chautauqua High School’s 1,600-meter relay to its first and only state championship in 1996, the year before it merged with Mayville to become Chautauqua Lake Central School.