When Raiders Came Home With Title 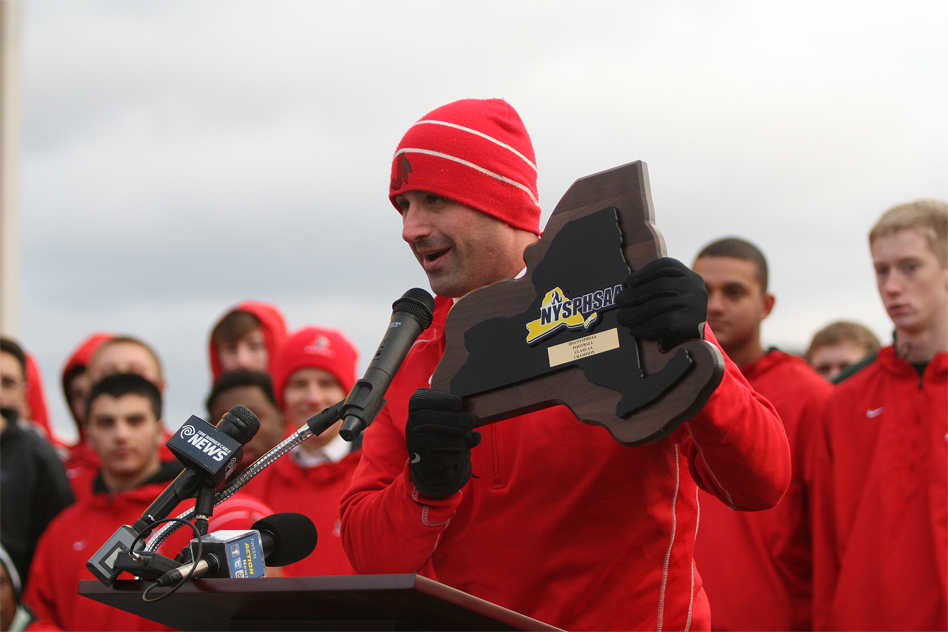 SYRACUSE — Tom Langworthy faced the Jamestown High School rooting section behind his bench Saturday night, extended his arms toward the roof of the Carrier Dome and the seventh-year coach let the index finger on each hand tell the story.

Yes, the Red Raiders are No. 1 indeed.

Junior quarterback Nikk Holland ran for three touchdowns and passed for another; sophomore Devan Jackson scored a pair of game-changing TDs 15 seconds apart; and Zack Panebianco, as usual, did a little bit of everything to send Jamestown to a 41-20 victory over Newburgh Free Academy of Section IX in the New York State Public High School Athletic Association Class AA championship game at Ernie Davis Legends Field.

The win earned the Red Raiders (12-1) their fourth state title in school history and their first since 2000. And, it also affirmed that a goal a special group of seniors had four years ago had finally come true. 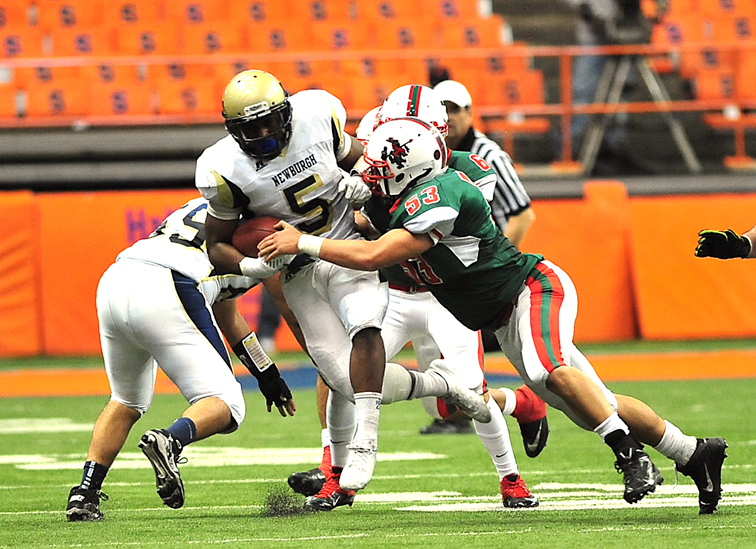 “This senior class is outstanding,” Langworthy said. “They are a great group of guys, who are very special in terms of their work ethic. They’ve taken our program from a good program to the top of New York state. There was really only one right way to send these seniors out and that was with a win tonight.”

One of the 12th-graders who shined the brightest on the state’s biggest stage was Panebianco. All told, the 5-foot-10, 190-pounder caught six passes for 156 yards and a touchdown; had six tackles; intercepted a pass; broke up four others; returned a punt 67 yards; kicked five extra points; and booted a punt that pinned the Goldbacks at their 1-yard line.

Is there anything that kid can’t do?

But Panebianco, the game’s Most Valuable Player, had plenty of help.

After staking Newburgh to a 3-0 lead in the first quarter — a turnover on its first possession led to a Peter Matthews’ 25-yard field goal — Jamestown marched 62 yards in seven plays capped by Devan Jackson’s 7-yard run with 3:34 remaining in the period. Panebianco’s extra-point try was good, giving the Red Raiders a lead they never relinquished.

On the ensuing kickoff, the sophomore ripped the ball out of the arms of Newburgh’s Anthony Dubose and returned it 44 yards for a touchdown. In the span of 15 seconds, Jackson had scored a pair of touchdowns and Jamestown’s lead had grown to 14-3.

“We practice that almost every week,” Jackson said of the strip. “We wanted to start fast, and that’s what I tried to do.”

But the Red Raiders’ fireworks were just beginning.

The Goldbacks added another Matthews’ field goal — this one from 28 yards — on their next possession to close within, 14-6, but Jamestown responded yet again. Starting at their own 36 the Red Raiders needed six plays to reach paydirt, highlighted by Holland-to-Panebianco passes of 18 and 45 yards. Holland capped the drive with a 1-yard keeper. With 7:53 left in the second quarter, Jamestown led, 21-6.

A team that had made a practice of starting fast all season had done just that.

After an exchange of turnovers, Newburgh pulled to within, 21-14, on Dubose’s 41-yard touchdown run with 2:21 left in the first half. But in a game filled with big plays, Jamestown didn’t sit on the ball.

With a drive start at his 25, Holland connected with Stephen Carlson for pass plays of 27 and 32 yards to set up the former’s 3-yard keeper giving the Red Raiders a 28-13 lead with 1:08 left before halftime.

The Goldbacks, aided by Dubose’s 48-yard burst, drove to Jamestown’s 1-yard line, but could not get another play off before the half ended. As the teams left the field for their respective locker rooms, the Newburgh coaching staff protested vehemently that they should be granted enough time to run one more play. Their protests were to no avail.

It appeared Jamestown was headed for another score early in the third quarter when Panebianco returned a punt 67 yards to the Newburgh 20. The Goldbacks’ defense stiffened, however, and the Red Raiders turned the ball over on downs at the Newburgh 15.

Armed with some momentum, the Goldbacks drove to the Jamestown 36, but senior Kyle Liuzzo, the game’s defensive Most Valuable Player, sacked quarterback Tyreik Washington for a 7-yard loss and the Red Raiders took over on downs.

“The thing I like about Kyle is he is a Red Raider,” Langworthy said. “He may be undersized, but he brings it every play, and has the heart of a lion.”

Jamestown managed a first down on its ensuing possession, but ultimately was forced to punt and Panebianco dropped a beauty at the Newburgh 1. Six plays later, Washington was intercepted by — you guessed it — Panebianco, who returned it 19 yards to the Goldbacks’ 25. Six plays later, Holland collected his third touchdown run of the night, this time from 2 yards, extending the Red Raiders’ lead to 34-13 with 11:19 remaining in the game.

Aaron Forbes’ 10-yard TD run with 9:42 left got Newburgh back to within two scores, 34-20, but that would be its final scoring opportunity as Jamestown’s defense — led by Carlson (18 tackles), Liuzzo (11 tackles, including five for loss and a sack), and Kevin Mosley and Damien Jackson (nine tackles apiece and the recipient of the Sportsmanship Award) — wouldn’t be denied.

Jamestown sealed the game when, on fourth-and-7 from the Newburgh 22, Holland hit Panebianco with a beautiful touchdown pass.

“The coverage was there for (a post pattern),” Holland said. “(Panebianco) split the safeties right down the middle. It had to be a good pass, right on the money, and I hit Zack right in the end zone.”

With a 41-20 lead with under four minutes remaining, the Red Raiders could begin counting down to another state championship.

“It’s not just any day that anyone can say they wore a Jamestown jersey,” Panebianco said. “Nor can they say they won a state championship in it. We made history tonight.”

Added Carlson: “Hopefully, we left our mark. Right now we’re really happy, but I think when we look back at it in 40 or 50 years we’ll be like, ‘Wow, we were state champs and we went out on top.’

“It’s just a great feeling to know that in the future we can always look back on this and say we were one of the greatest teams in Jamestown history.”

NOTES: Holland finished the game 15-of-24 for 280 yards, a touchdown and an interception; and Carlson had five receptions for 90 yards. … Joe Mistretta had eight tackles, including three for loss, and Jack Breen also had eight stops. … Joe Ramos had an interception for the Red Raiders. … Dubose had a great game, finishing with 259 yards on 21 carries, while Forbes added 88 yards on 20 carries for Newburgh.