When Trojans Came Home With Title 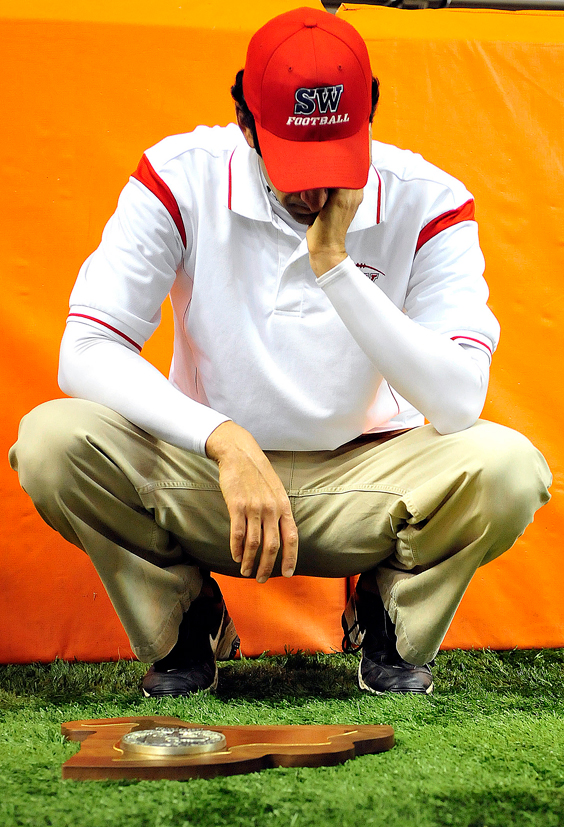 Croton-Harmon coach John Catano was at a loss for words, too.

But, courtesy of a 70-second stretch in the second quarter in which they scored three touchdowns, the top-ranked Trojans seized control of Saturday’s New York State Public High School Athletic Association Class C championship football game en route to a dominating, 35-7, victory over the Tigers at the Carrier Dome.

“In a game like this, momentum is going to be a killer,” Southwestern coach Jay Sirianni said. “We grabbed it and didn’t let go of it.” 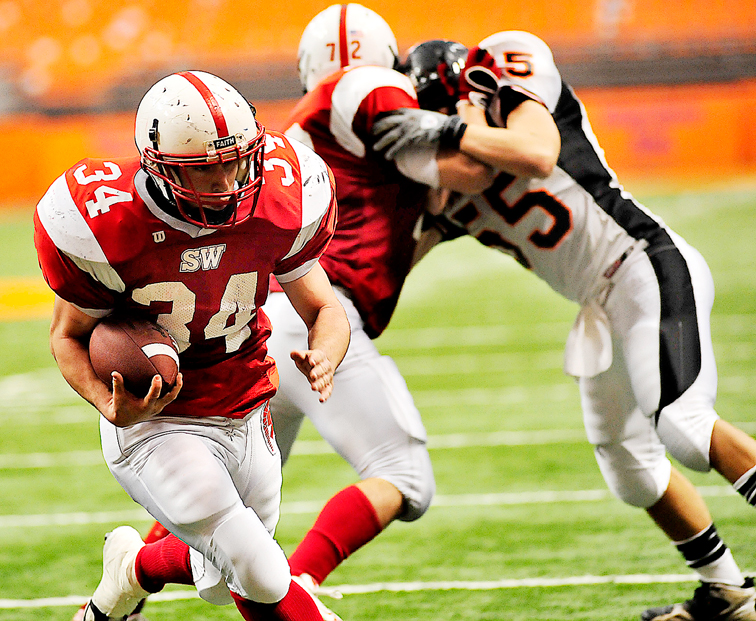 As a reward, the Trojans returned home with the plaque that signified them as the best Class C team in the state.

No one could dispute it.

Junior quarterback Zack Sopak, the game’s Most Valuable Player, threw for two touchdowns and ran for one; sophomore John Mistretta, the most valuable offensive back, rushed for 92 yards and a score; and the defense did the rest to secure Southwestern’s first state football title.

“This is for every person who ever played at Southwestern,” Sirianni said. “That’s what makes it special for me.”

There was nothing particularly special early on as the game was scoreless in the first quarter. The Trojans — behind the running of Sopak, Mistretta, junior Levi Bursch and senior Eric Mazgaj — mounted a 10-play, 64-yard drive, capped by Sopak’s 20-yard touchdown pass to Bursch in the right flat. Senior Dan Imfeld, who had missed a 30-yard field goal in the first quarter, booted the first of five successful extra-point tries to give Southwestern a 7-0 lead with 6:36 remaining in the first half.

It didn’t take long for the Trojans to find the end zone again.

How does 14 seconds sound?

On the first play from scrimmage, the Tigers fumbled, thanks to a hit from junior defensive end Corey Carlson. Buzzetto scooped up the loose ball and sped 29 yards for the touchdown, pushing Southwestern’s lead to 14-0.

“It’s one of the greatest feelings I’ve ever had,” said Buzzetto, who led the Trojans with 10 tackles, including two for losses, one forced fumble and one sack. “It came right to me.”

Added Carlson: “I could not wipe that smile off my face.”

But there was more where that came from.

In 1:10, Southwestern had scored three times.

“In a game like this, you can’t have turnovers,” Catano said. “Unfortunately, we were on the receiving end.”

The Trojans’ defense saw to that.

Armed with a 21-0 lead by halftime, the kids in red and white punished Tigers’ quarterback Nick Mainiero and three other running backs, holding them to 199 yards in total offense, 48 of which came on a touchdown pass late in the fourth quarter.

“It’s true what they say,” Sirianni said. “Defense wins championships and we had the defense to do it.”

Sopak and Mistretta added second-half touchdowns, pushing the lead to 35-0 with just under eight minutes remaining in the game.

For Mistretta, who averaged 9.2 yards per carry, it was especially gratifying.

“I told him that he had to go out and run with no worries,” Sirianni said. “On the biggest stage in New York, you have to run like this is your last game and, fortunately for us, he’s got two years left.”

Added Mistretta: “To have a couple carries the last couple games and then to come back with 10 carries feels great. To come out on top feels even better.”

Having that winning feeling again is not a reach. In fact, with many of the top players returning next year, it’s not inconceivable that the Trojans could be back at the Carrier Dome a year from now.

One of the returning players will be Sopak, who has been named an MVP each of his last three games. Against Croton-Harmon, he completed 5-of-7 passes for 92 yards and rushed 12 times for 77 yards.

“It’s not all me,” he said. “I have a great supporting cast around me, but when the game’s on the line I know I have to make plays.”

The ability to make plays — on both sides of the ball — was common for Southwestern.

“We came out and proved that we should be No. 1 in the state,” Sopak said.

When asked how he feels about having two champs in the same Chautauqua County neighborhood — nearby Maple Grove crushed Moriah, 55-7, for the Class D crown — Sopak smiled.

“It’s a huge deal for Chautauqua County,” he said. “We both had great teams this year and we could have great teams next year, too.”