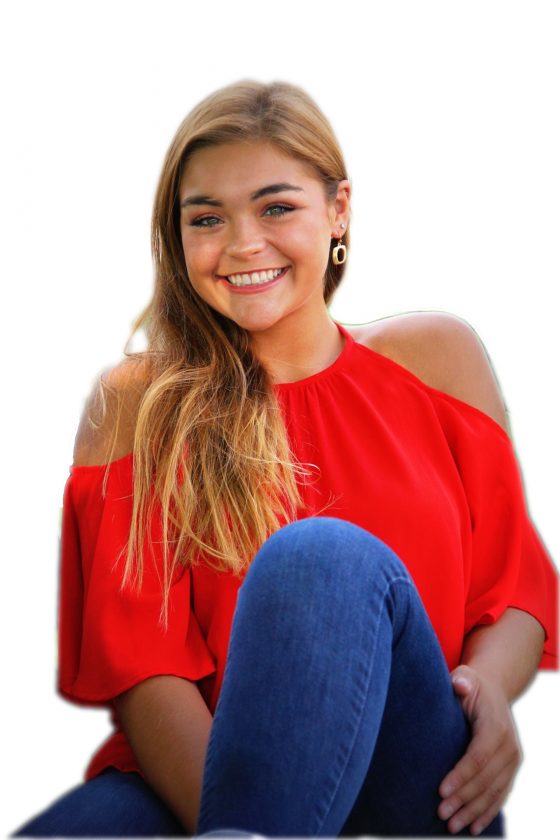 Randolph senior Brynn Pagett excels on the volleyball court, the softball diamond and in the classroom all while dealing with cystic fibrosis since birth. Photo courtesy of the Pagett family

But it’s just a little bit more powerful when a student from one of the participating schools sings the national anthem live.

Brynn Pagett made sure that was the case March 3.

To no one’s surprise, including her adoring father Jeff catching it on video with his smartphone in the stands, Brynn nailed it.

“Every day, it’s amazing,” Jeff said earlier this week. “It makes me smile to know where we started and see everything that she’s accomplished and worked for. Like (her classmate) Tyler Hind said, ‘She’s the epitome of hard work and dedication.’ She puts her studies first … and at the same time takes care of herself and her health.” 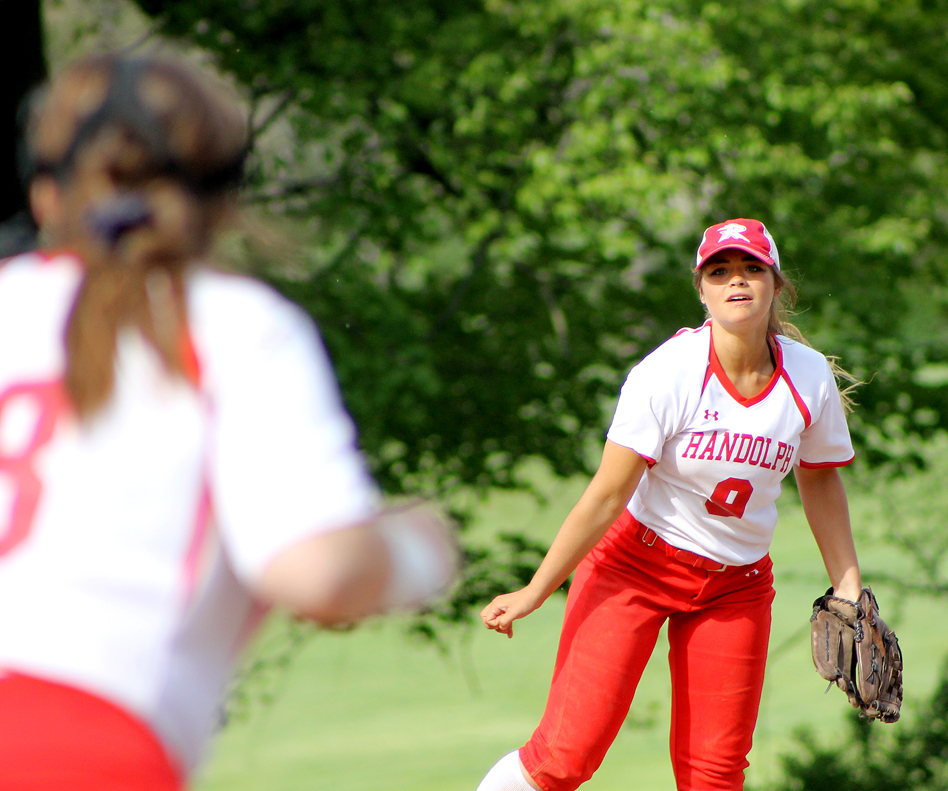 Randolph senior Brynn Pagett excels on the volleyball court, the softball diamond and in the classroom all while dealing with cystic fibrosis since birth. Photo courtesy of the Pagett family

It was just the latest in a lifetime of shining moments for Brynn. 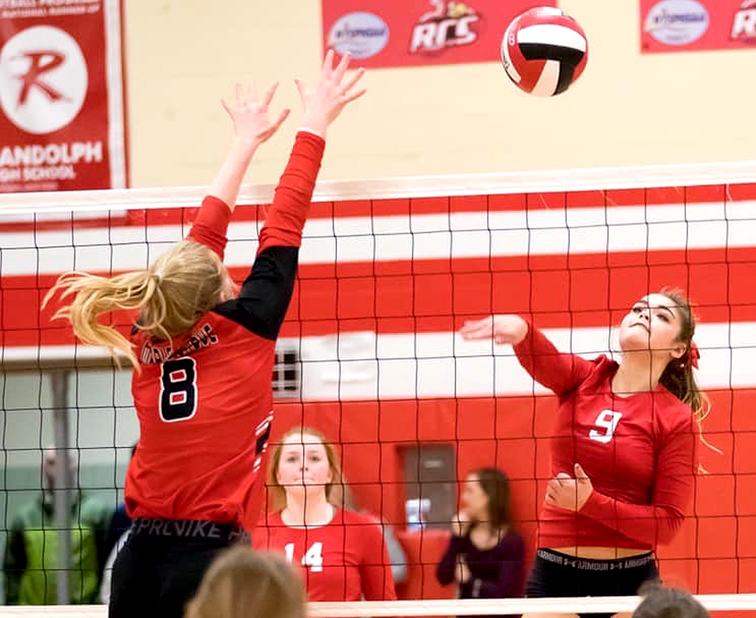 According to WebMD, those are just a few of the symptoms of cystic fibrosis.

In addition to the lungs, the genetic disorder can also result in complications damaging other parts of the body including the pancreas, liver, intestines, bladder, kidneys and reproductive system.

Brynn, a senior at Randolph, was diagnosed with cystic fibrosis at birth.

Those who casually know her may never even realize it, even if they’ve known her for a long time.

She has not only dealt with CF, but she has thrived despite it. 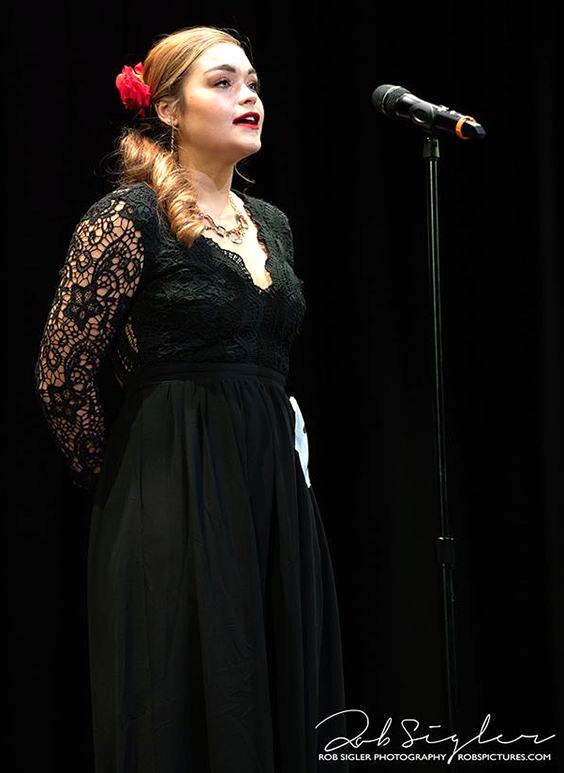 She has succeeded on the volleyball court, on the softball diamond and even returned to basketball her junior year to help her friends and teammates who were short on numbers.

And, most of all, she has excelled in the classroom en route to being named Randolph’s 2020 valedictorian.

But none of those things came easy for Brynn.

A day later, Jeff — an assistant football coach at Southwestern where he teaches to this day — was at the Trojans’ annual preseason scrimmage when he received a phone call.

“Something was up with Brynn,” Jeff recalled Wednesday evening. “They took her to Buffalo because she couldn’t keep anything down.”

Brynn’s dad joined his wife, who happens to be a physical therapist at UPMC Chautauqua, at Children’s Hospital where Brynn was diagnosed with meconium ileus — a blockage of the small intestine.

“Nobody in our family had ever had it. In previous generations, people died early and young, but there was no diagnosis of (CF),” Jeff said. “Originally it was pretty scary. … At the time, the average life span was about the mid-20s.”

As an infant, Brynn’s parents had to use a cupping motion to pound on her back in different spots to loosen up the mucus.

“When she was born, my wife was an expert at it and I was not,” Jeff admits. “My wife gets a ton of credit. When Brynn was younger, my wife did a bunch of stuff to make sure she stayed healthy.”

Brynn also has early recollections of how CF affected her life as a child.

“I remember I was 2 or 3 years old … during a hospital visit I remember being in more of a crib-like bed,” she said Wednesday. “My mother was holding my hand telling me it would be OK. I had to go and get a PICC line put into my lungs from my arm. It was like a bee sting times five. Being a young, little girl I absolutely hated it.”

Throughout her youth, Brynn began to pick up multiple sports.

She played youth softball and soccer while also dancing beginning at age 4, and cheerleading in the Randolph Raiders midget program for six years.

All the while, she and her family were controlling her CF.

To this day, Brynn has to undergo a pair of half-hour to 45-minute breathing treatments each day. She takes “several different medications,” according to her dad, to loosen up the mucus in her lungs. Then she is hooked up to an oscillating chest vest to shake her and the mucus in her lungs. After, Brynn breathes into a nebulizer to help reduce inflammation.

Her soccer career came to an end early on as the hot summer days at times became too hard to overcome.

“In middle school, my parents really encouraged me to try out for volleyball and try that instead,” Brynn said. “The running from soccer was going to be very difficult for me.”

Early in her freshman year, Brynn experienced her scariest bout with CF. During volleyball season — from the middle of September into October — she was admitted to Children’s Hospital for a nearly monthlong hospital stay.

“It was huge getting her to play sports, but we didn’t have (CF) completely under control,” Jeff said. “We were back up to Children’s. … We’ve been lucky that we haven’t had to visit Oishei. She hasn’t had to be hospitalized since then.”

Robin Maycock, the Cardinals varsity coach, remembers that season, too.

“I had seen her on JV and I honestly thought about bringing her up the year before,” Maycock said Thursday afternoon. “I couldn’t wait to have her on my team and she has never stepped off the court since. She just has that inner drive.”

Now older and able to take care of herself, while other classmates are sleeping an extra hour or two, Brynn is up before the sun.

“I do breathing treatments every morning before school and every night before I go to sleep. I wake up 40 minutes before anybody else in the house other than my dad,” Brynn said. “My friends roll out of bed at 7:20, get ready in five minutes and come to school.”

As Brynn has gotten older and time has passed, the science behind the treatment of CF has evolved. The newest drug on the market, Trikafta, has shown the greatest results.

“It’s something I’ll deal with the rest of my life, but new medications have started to alter the sodium channels in my lungs and body,” she said. “It fixed what the genetic mutation is causing. … My CF symptoms and the difficulty with my lungs have been reduced so much it’s honestly unbelievable.”

Despite the medical setbacks, Brynn has continued to shine in the classroom. She has remained at the top of her class academically.

“I constantly feel like even though I’m working hard and dedicating a lot of time, I feel like I’m still behind in something else. Figuring out how to make sure I got my breathing treatments done first and foremost as a kid … nothing else happened in the morning until that. … Having that scheduled mindset makes things a lot easier.”

A four-year varsity volleyball player, she helped the Cardinals win a Section VI Class D-1 championship this past fall.

“Robin Maycock is like another mother to me,” Brynn said about the longtime Randolph coach. “I knew it was going to be one of my best seasons. I felt like every single day was a new day for me to make Mrs. Maycock proud. I tried my absolute best all the time. From the beginning of the season until the end, I could see my improvement and my team’s improvement … not only on the court but in our team bond. That made me so happy to say that’s how my senior year ended up.”

“I have the utmost respect for Brynn,” Maycock said. “The best thing about her is that she’s the best person and one of the nicest people I know.”

She also stars on the softball diamond, but had her final two seasons cut short. As a junior, a broken wrist suffered during her lone high school season of basketball sent her to sidelines and when she eventually returned she was only able to play the field, but not bat.

This spring, she was ready for her “comeback season,” but the coronavirus pandemic had different ideas, putting the season on hold after just a week of practice before it was eventually canceled altogether.

“It’s heart-breaking to see her lose the opportunity to play one more time and be with her friends and teammates,” Jeff said. ” … We thought we had a pretty decent team coming … and we’d make a splash.”

Brynn and her classmates have missed out on spring sports Senior Nights, prom and likely in-person graduations, but there is likely nobody better equipped to deal with setbacks than Brynn.

The sister of Mason and Luke will attend the University at Buffalo in the fall to major in engineering and minor in Spanish.

“I’ve always wanted to do something with Spanish and I truly love math and science,” Brynn said. “I don’t want to make a final decision about what type of engineering, but I can actually see myself (in the field).”

“She has a good head on her shoulders,” said Maycock, who was Brynn’s math teacher as a sophomore and a junior. “She’s going to be successful in whatever she does.”

That’s something that will make any parent happy.

“It’s amazing what she’s been able to accomplish,” Jeff said. “She has God-given abilities, but a lot of it has been through hard work and perseverance. As a parent and a coach, it makes me doubly proud.”