A Young Lady With ‘Motor’ Skills

Gracie Conlan sprints down the field during a flag football game. Submitted photo 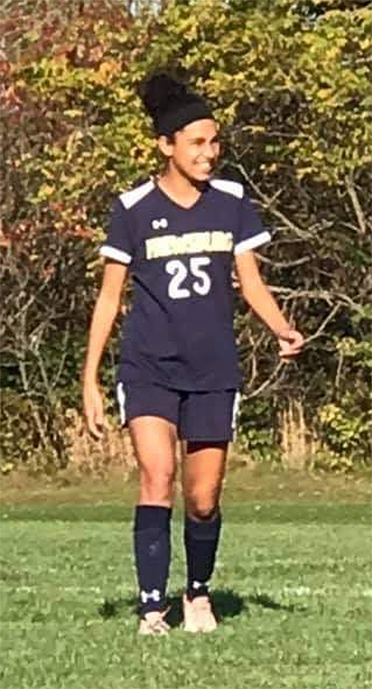 Just a shade over 33 years ago, I stood in the living room at Dan and Kay Conlan’s Frewsburg home, moments after their son, Shane, was drafted by the Buffalo Bills with the eighth overall pick in the first round of the NFL draft.

As Dan answered questions from the media about the milestone morning, his eyes — a bit red, as I recall — showed just how proud he was. That was the most emotion I’d ever seen from him, even though he’d spent years watching his kids, who also include Kelley, Kevin and Mike, have athletic success at the highest level.

Fast-forward more than three decades to last fall when Dan’s granddaughter, Gracie — daughter of Mike and ALynn — was playing in a soccer game.

“My whole family was watching (her),” Mike recalled, ” … when Shane said, ‘I never heard dad cheer before.’ To which my father replied, ‘I like watching her play more than I did you guys.’

“She is the apple of his eye.” 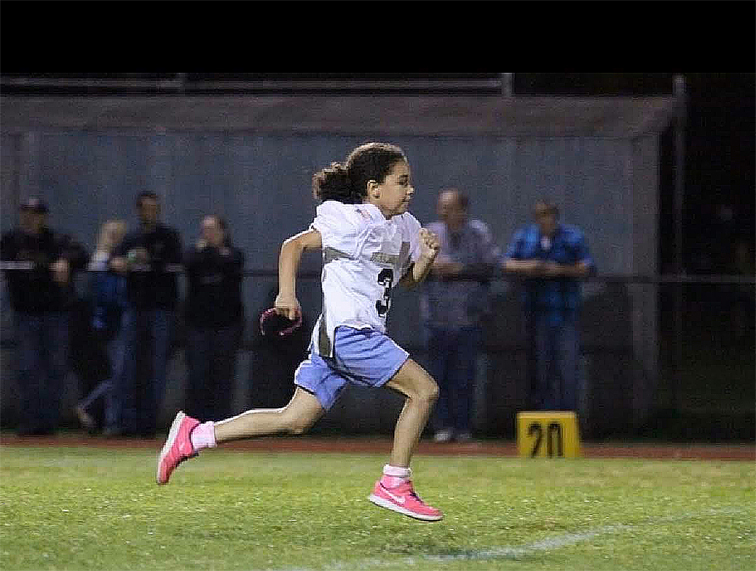 Gracie Conlan sprints down the field during a flag football game. Submitted photo

Gracie, a 14-year-old eighth-grader at Frewsburg Central School, is passionate about sports of all sorts — soccer, basketball, track, flag football and even wrestling.

“I love competing in everything,” she said.

That’s why the cancellation of sports this spring because of the COVID-19 pandemic, and the uncertainty of their resumption in the fall, has hit Gracie so hard.

“I was angry, frustrated and sad when I heard there might not be sports, because I love to play sports and I’ve worked so long and hard to get where I am today,” she said.

Her dismay was made even greater when she overheard a conversation between her dad and her older brother.

“My son, Quinn, and I were talking about the possibility of him not going back to Lehigh, where he is a molecular biology major, in the fall,” Mike said. “I had said to Gracie (that) if schools don’t reopen, there is a real possibility that there may be no college football.

“She did not appreciate my opinion at all.”

“(It’s) not because my dad, brother, uncles and cousins played football at a pretty high level,” Gracie said, “it’s because I have ultra-obsessed grandmothers, Kay Conlan and Bonnie Mackie, who showed me what genuine passion is.”

Gracie has turned that passion into words, compiling what she calls “A List of Reasons to Play High School/College Sports.”

“My motivation for creating this list was to send it to the NCAA and high school administrators to remind them of the importance of competing,” she said.

Supported by statistics showing the numbers of high school and college athletes who are impacted by the cancellations, Gracie provided 25 reasons why, in fact, the games should go on.

“This child is a college football savant,” Mike said. “She knows every coach, conference leader and individual leaders for just about every power-five team. She sat down with the idea of trying to persuade the NCAA about the importance of sports and came up with the list and spreadsheet all on her own.”

Added Gracie: “With no sports right now I am working out with my brother and (I) practice soccer via Zoom with my teammates and coaches of the (Frewsburg Soccer Club). My mom and dad seem lost with no sports practices, with no games, meets or hanging out with team families on the sideline. They don’t know what to do, although they got a lot of remodeling done.”

It’s apparent that Mike and ALynn have “built” quite a character-filled daughter.

“ALynn and I both loved number 20 on her list — ‘Helping to shape yourself to become a better version of you,'” Mike said. “As a parent, when you read something like this from your child, you realize that you might have done a pretty good job bringing them up.”

He believes he was prophetic.

“Since we brought her home … she has been a gift from God,” Mike said. “She lights up a room when she walks in, with her personality and energy. She could get my father-in-law, Al Mackie, in such a frenzy at her games that it was magical. His nickname for her was, “Motor” because of her speed and energy.”

It’s those “Motor” skills that Gracie hopes will one day allow her to continue her athletic career in college.

“Some would think that I would root for Rutgers, Penn State, Ohio State and West Virginia, but I live and breathe Pitt Panther sports,” she said. “My ultimate goal is to compete in soccer, track or basketball at the University of Pittsburgh.”

I know I’d want Gracie on my team.

She wrote: “If someone is having a bad day, sports can help uplift them and allow that person to feel loved, safe and relaxed.”

1. If you are a student-athlete, you are going to want to make memories with your friends, teammates, classmates, family.

2. You can rock your school’s colors and show your team spirit/pride.

3. Millions of people around the globe watch these sports.

4. Everyone is just as crazy and into the game as you.

6. They have the power to change the outcome of a game.

7. The crowd goes wild when there’s an upset.

8. They have the best rivalries.

9. It has an astounding atmosphere and amazing food.

10. You can’t get yelled at for cheering as loud as you can.

11. You get to be with your friends, family, classmates and strangers who feel just as strongly as you about the sport.

12. You get to dress up, have fun and tailgate.

13. Everyone’s passionate about their sport and team.

14. You get to cry with strangers, family, friends, classmates and teammates when you lose.

15. You get to celebrate with strangers, family friends, classmates and teammates when you win.

16. Parents want their kids and/or young adults to make memories with their friends and teammates. Also they want to see them play.

17. Coaches are going to want to see their players progress and achieve great things, and go far.

19. Making new friends with people from your team and the other team.

20. Helping to shape yourself to become a better version of you.

21. Being pushed past your limits.

22. Working hard, and striving to get better.

23. Experiencing what it’s like for the first time and last time you play that sport.

24. If someone is having a bad day, sports can help uplift them and allow that person to feel loved, safe and relaxed.

25. Sports is a destresser because you forget about school and homework, and you can just have fun with your friends.