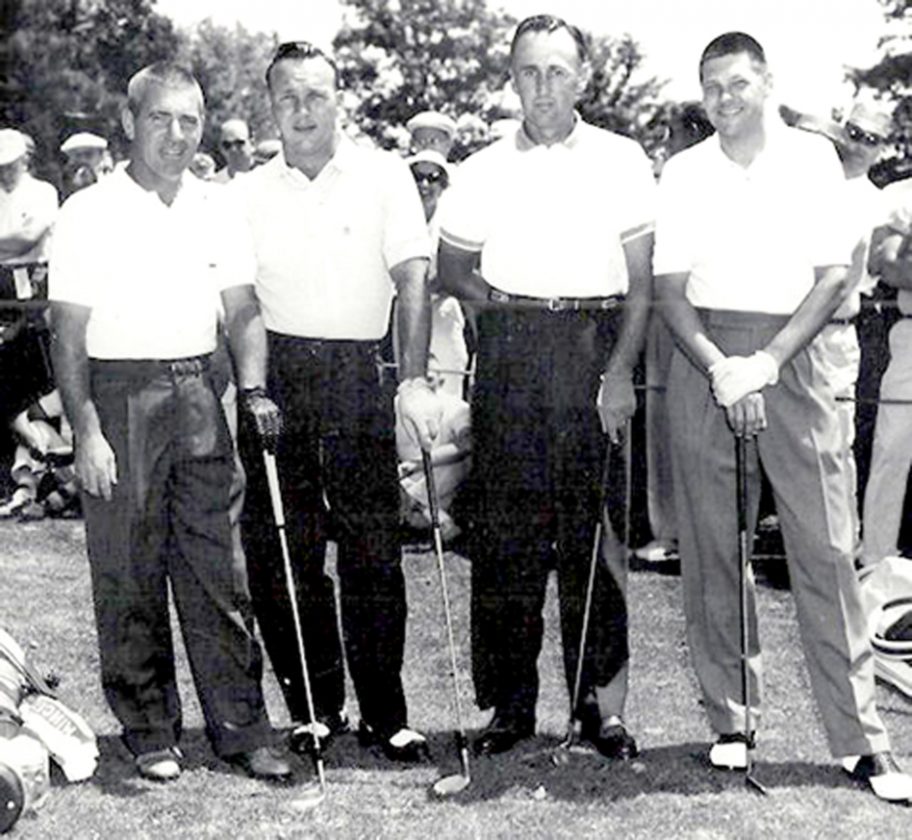 EDITOR’S NOTE: The following article appeared in the July 28, 1959 edition of The Post-Journal. Sportswriter Doug Smith chronicled a golf exhibition at Moon Brook Country Club between pros Arnold Palmer and Art Wall and locals Ben Bishop and Toby Lyons. This is another in a series of “Remember When?” stories.

… And everybody went home happy.

There, in a nutshell, is the summation of yesterday’s professional golf exhibition at Moon Brook Country Club.

If there was a hitch in the proceedings, nobody would find it. There were shots on the first and 18th holes which left eyeballs bugging out like warts on a toad, plenty of good golf in between, plenty of people to watch it and ideal weather to watch it in.

“It was even more successful than we had hoped,” said chairman Garner B. Darling and MBCC president George Kessler.

When pressed, Darling even hinted there may be a similar presentation next year. Probably 90 percent of the estimated gallery of 1,500 will be back.

Art Wall and Arnold Palmer won it, 5 holes up and 4 to go, over hometowners Toby Lyons and “Ben” Bishop, but nobody minded. The contest element was merely a vehicle for the finest golf displayed hereabouts in some time.

Palmer’s three-under-par 68, which included five birdies, took medal honors with Wall a stroke behind. Bishop, pulling two spectacular shots out of his bag, won a whomping round of applause with an excellent 70 and home pro Toby checked in with a 73.

The fireworks started on the very first hole, listed at 316 yards on the scorecard, but playing at about 325 with the tee moved back. Palmer drove it, drove it but good, with a mighty tee shot which rolled about five feet on the right of the pin and continued all the way to the back of the green.

It brought down the house, and the applause which followed wasn’t matched until Bishop uncorked an uncanny wedge on the 18th.

Lying two, off the green some 15 yards out, Bishop rolled his wedge shot directly into the cup to finish under par.

Bishop also knocked in a curling 25-foot putt for a bird four on the 582-yard fourth. His putting and chipping were virtually flawless — he needed just 26 putts, 10 under the so-called “regulation” two per hole.

Wall-Palmer were only one-up after seven, then went to work and won five of the next seven holes to lock up the match. Palmer’s 8-iron on the 135-yard eighth left him a four-foot putt which he sank for bird. Both invading pros parred the ninth while Bishop and Lyons took bogeys, putting the locals three-down at the turn.

Recuperating, Lyons and Bishop knocked in tough putts for birds on the 10th while Wall and Palmer were parring. But the Pennsylvania pros quickly put things out of reach. Palmer tapped home an 18- foot putt for deuce on the 160-yard 11th, both birdied the 12th, and after the 13th was halved with all hands showing par 3s, Palmer managed a par on the rugged 14th while all others bogeyed and the match, from a competitive standpoint, was over.

Wall, a total stranger to the course, was in trouble on the greens. His approaches went to the high-side as if drawn by a magnet and his 33 putts were the most needed by any member of the foursome.

Nonetheless, the personable Keystone Stater found the range on the last three holes and came in birdie-par-bird to give Palmer a run for his money. Arnie was in deep trouble only once, when his approach from the rough on No. 3 went over the green into a clump of trees He took a bogey 6 on the hole, the only six of the day on any scorecard.