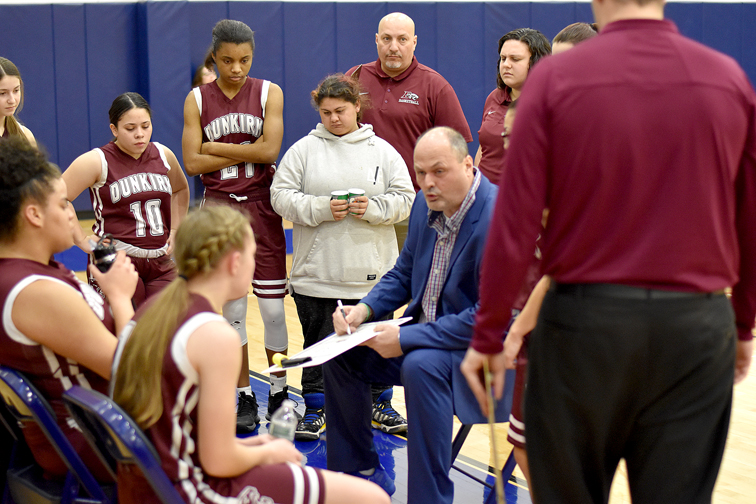 Ken Ricker’s basketball season to remember began last summer when his alarm clock woke him up at 4:45 each morning.

“I wanted to shut it off,” he admitted.

But by the time Ricker made the half-hour drive from his Lakewood home to Dunkirk High School for a 6 a.m. workout with a group of fired-up girls, his frame of mind changed.

“When someone has you running at 6 in the morning, that’s not ideal,” the Marauders coach said. “For those girls to show up, and show up every day and work so hard, that’s where it all started.”

What a ride it turned out to be.

In his second season as head coach at the northern Chautauqua County school, Ricker and assistant Bill Canfield guided senior-dominated Dunkirk to a 24-1 record, including a Chautauqua-Cattaraugus Athletic Association Division 1 West title and a Section VI Class B-1 championship.

Along the way, the Marauders posted four Class B-1 playoff victories and a crossover win, each one more impressive than the last.

But considering that the current seniors won only one game when they were freshmen and were beaten handily as sophomores in the sectional final, getting to the brink of the New York State Public High School Athletic Association quarterfinals this season was, well, nothing short of miraculous.

Deploying a system that required playing at break-neck speed on offense with a heavy reliance on 3-point attempts, in addition to pressure defense, Dunkirk dispatched City Honors, 85-74, in the Class B-1 semifinals and downed Iroquois, 79-76, in the finals, setting up a third meeting with division-rival Southwestern in the Class B crossover game at the Buffalo State Sports Arena.

At stake was a berth in the Far West Regional, but Dunkirk’s chances of advancing appeared bleak at best as the Trojans, who had lost twice to the Marauders during the regular season, led 60-40 with two minutes left in the third quarter.

Then Dunkirk went on a run to remember.

Sparked by the play of Kymi Nance, Jessica Beehler, Nadara Odell, Amari Carter and Olivia Smith, the Marauders finished the game on a 35-2 clip en route to a 75-62 victory. The surge affirmed to Ricker that Beehler’s season-long “mantra” was spot on.

And they didn’t, maybe because they didn’t want to let each other down.

“They just really love each other,” Ricker said. ” … They root for each other and generally care about each other. … I told them many times they were a perfect group.”

After the epic win over Southwestern, that “perfect group” never had a chance to see how much farther it could extend the season.

“We went to a team dinner the night that (NBA player) Rudy Gobert had tested positive (for the coronavirus),” Ricker said. “We knew we weren’t going to get to play again. … What’s going to stand out for me is the playoff run and the resiliency of those kids. Both the Iroquois game and the City Honors game, we had foul trouble, we had a lot of adversity. They just kept working, kept going.”

In reality, the girls were following the lead of their coach, whose new teaching job in the classroom during the school day helped him with the transition to his other “teaching” job after the final bell.

That’s what Ricker did for his team in what turned out to be his final high school season on the bench. The day after the remainder of the postseason was canceled last month, Ricker was named the new women’s basketball coach at Jamestown Community College.

“For us as a family, our move to Lakewood, along with taking the Persell job and getting a chance to work with those kids, it’s really been a good year for us,” Ricker said.

It gets even better today as he is The Post-Journal’s girls basketball Coach of the Year. It marks the fourth time in his coaching year he has been so honored, having earned that distinction following the 2006, 2007 and 2011 seasons when he was calling the shots for the Jamestown program.

Ricker leaves the high school scene with a 176-43 record and four Section VI championships. As he transitions to the National Junior College Athletic Association next season, he’s not about to forget this last title.

“My main goal was to get back there, put them back on the stage at Buffalo State,” Ricker said.

The Marauders put on a grand performance indeed.