How A Simple Act Of Kindness Endures Even Years Later

Mike Walker was Falconer Central School’s wrestling captain in the late 1970s, but to Kevin Davenport he was far more than that. Photo courtesy of Kevin Davenport

In this file photo, Kevin Davenport, top, wrestles during a match from his Falconer Central School days. P-J file photo 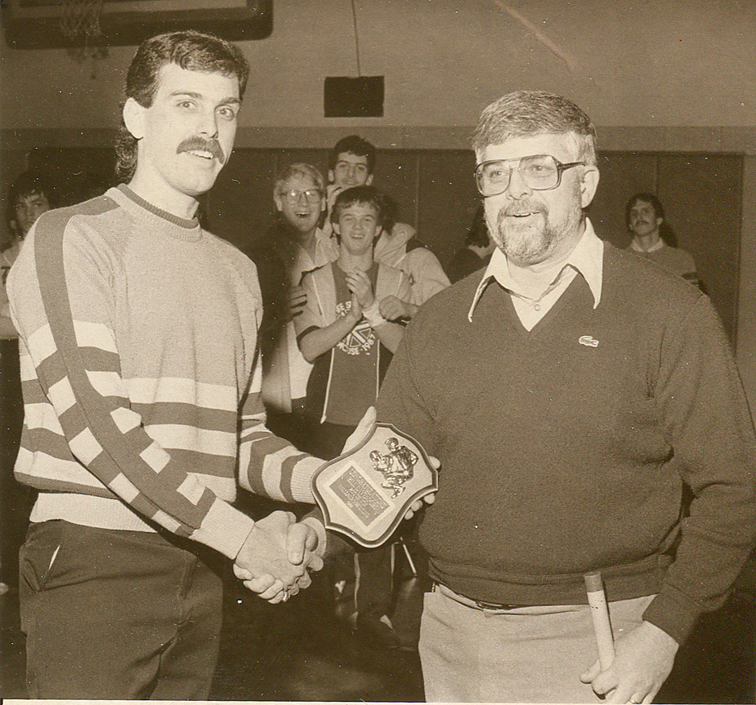 EDITOR’S NOTE: The following article, which first appeared in The Post-Journal in May 2014, is another story in the continuing series, “Remember When?”

With an assist from his wife, Carol, and his friend/photographer, Sam Ognibene, Bill painstakingly fills the pages with mat memories in anticipation of the team banquet. As he does so, one photo eventually grabs the attention of Kevin, Bill and Carol’s 7-year-old son.

The image is of Mike Walker, the Golden Falcons’ captain, who is wearing a red wrestling singlet with the No. 6 emblazoned on the chest. Nobody else is in the photograph. That’s fine by Kevin, because, in his world, there’s nobody who measures up to Walker, an athlete who is a FCS legend to everyone but himself.

Kevin thinks so much of Walker that one day he locates his dad’s scrapbook, finds the appropriate page, removes the Walker photo and deposits it in his dresser drawer. The thing is, the reverence Kevin has for his hero has little to do with athletic achievement and everything to do with human decency. 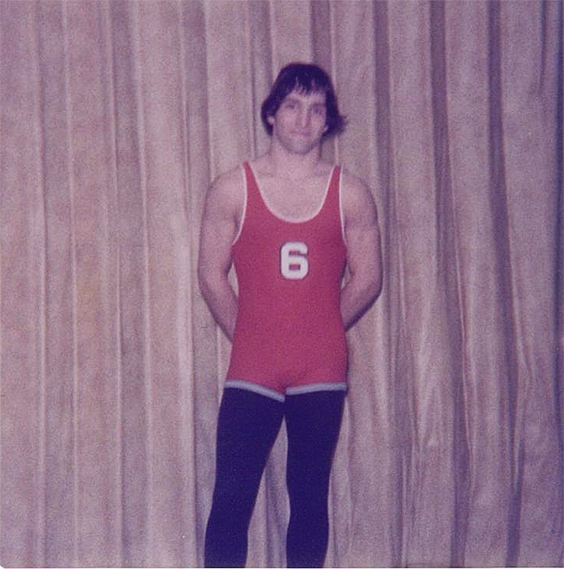 Mike Walker was Falconer Central School’s wrestling captain in the late 1970s, but to Kevin Davenport he was far more than that. Photo courtesy of Kevin Davenport

Facebook, the online social networking service, allows registered users to, according to its Wikipedia page, “continuously stay in touch with friends, relatives and other acquaintances wherever they are in the world, as long as there is access to the Internet. It can also unite people with common interests and/or beliefs through groups and other pages, and has been known to reunite lost family members and friends because of the widespread reach of its network.”

By Kevin’s estimation, he has not seen Walker in more than 30 years. During that time Kevin has gone from a three-sport star for the Golden Falcons to married father of three boys, from a member of Falconer’s Kids Wrestling team to a teacher/administrator, who, thanks to a recent career change, will graduate from nursing school Monday.

Coincidentally, Kevin was reminded of Walker last month while he was going through old photographs, including the one he’d removed from his dad’s wrestling scrapbook in the late 1970s. 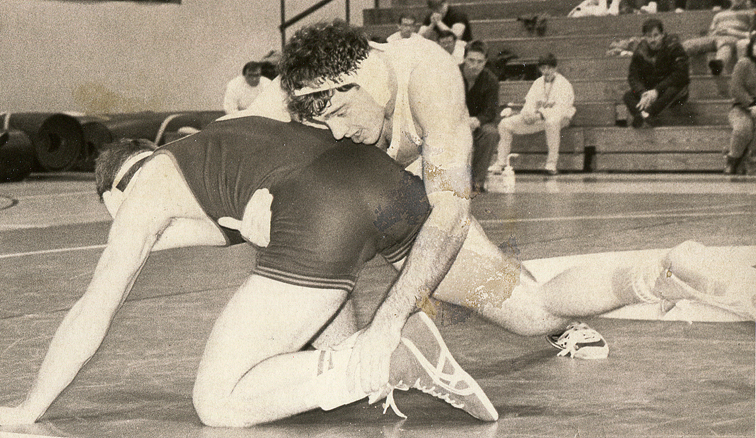 In this file photo, Kevin Davenport, top, wrestles during a match from his Falconer Central School days. P-J file photo

“I was just going through pictures,” Kevin said, “and I saw all the ‘Throwback Thursday’ stuff on Facebook. … I came across the picture of Mike again and … I did a Google (online) search and saw that he was on Facebook.”

Kevin sent a “friend” request to Walker, who accepted it, and the reconnection had been made. But Kevin, who now lives in Lancaster in suburban Buffalo, had an ulterior motive for seeking out his idol from a generation earlier.

“What I wanted him to know, and other people to know, was how much of an impact he had on me without saying a word and how much it meant,” Kevin said.

So, on May 2, he posted the following, accompanied by Walker’s 1979 wrestling photo:

“Today I recall a defining moment in my life and wish to thank the man that, without knowing it, changed my life forever. The defining moment was 1979. I was a 7-year-old scared to death that my ostomy made me different and lesser than every one of my friends. I joined the kids wrestling team at age 5, but refused to shower after practice because I didn’t want others to make fun of my appearance. On this night, I waited until everyone else was gone, and went into the shower by myself. Out of nowhere, Mike Walker, captain of the high school wrestling team and FCS Athlete of the Year, came into the shower. He never made a comment, not a second look or question. It was at that very moment that I knew I would never again question my esteem or my ability to make my life’s canvas show whatever I wanted it to. I have never had a chance to tell Mike — while he didn’t know it at the time — his actions that day transformed a little boy and gave him the confidence that no mountain was too high, no challenge was insurmountable. You’re one of my heroes.”

One was from Walker, 52, who now lives in Frewsburg with his wife Johnna and works for the Town of Carroll Highway Department.

“Your post really touched me,” he wrote. “I have been blessed to have known you and your family during my lifetime. With what you had to go through at such a young age you are the true hero to so many around you. I will always remember what your father, our coach, taught us (and) that is to never give up. Coach would say when you think you can’t go any more, you have two more hours left in you. I know that man not only inspired all of us, but loved you back to what you are today. Thank you and everyone else who made such kind remarks. Kindness still survives!!!!”

“I was taken aback when I first read it,” he said. “… Nobody can imagine the feeling I felt. I just wept for a long time.”

Walker’s athletic prowess is well-documented. From being one of the Golden Falcons’ all-time best running backs for football coach Bill Race, to racking up impressive win totals for Davenport on the wrestling mat, Walker was “the man” at FCS.

He was also one of the school’s all-around good guys.

“Mike Walker was such a classy kid and still is to this day,” said John Gatto of Maple Springs, who was Walker’s high school wrestling teammate in the late 1970s. “Mike was a quiet kid that always had a smile on his face. He was a pure physical specimen on the wrestling mat and football field. He was tough as nails. He had ZERO arrogance, never made excuses, and led by example. He was so non-pretentious. His parents were very nice people that brought him up the right way.”

With that as a backdrop, rewind 35 years ago to when Kevin, then 7 and battling colitis, had just finished Kids Wrestling practice at FCS. Reluctant to shower with his teammates because of his ostomy, he waited until everyone had left.

Believing he was alone, Kevin began his shower only to find that he was about to have company.

“Mike had been working out in the weight room, unbeknownst to me. He walked in and, I swear to God, I can still remember shaking in my boots,” Kevin said.

What would Walker say about Kevin’s ostomy?

Would he make fun?

None of the above happened.

“It wasn’t only that he didn’t say anything,” Kevin said, “he didn’t take a second look. It was like no big deal (to him). He walked in and took a shower, I took a shower and for me I went (figuratively) through the roof.

“If he would have come in and started laughing at that moment, I could have gone in a totally different direction.”

Instead, Kevin recalls getting to school the next day and announcing to his second-grade teacher at Fenner Elementary School that he wanted to do “show and tell.”

“I stood in front of the class and told them I had an ostomy, and what it was and what it did,” Kevin said.

Just like he experienced with Walker the day before, Kevin’s classmates didn’t say a word.

“For me, that was the catalyst,” he said. “If you track back the steps and go back to that day in the shower and Mike not saying anything, it gave me so much confidence and belief in myself.”

Walker admitted that he doesn’t remember his chance after-practice meeting with Kevin all those years ago, but he does recall a saying that he tries to live out on a daily basis.

“It’s nice to be important,” Walker said, “but it’s more important to be nice.”

As for Kevin? Well, to say he flourished growing up would be an understatement.

By the time he graduated from high school, he was first-team all-conference in football, wrestling and baseball and was named Falconer’s outstanding male athlete his senior year. He also had the lead in the school musical, was an all-state selection in chorus and had many scholarship offers, including one to play Division II baseball for Quincy University.

Although plenty of good stuff has transpired in Kevin’s life since that chance meeting with Walker, it hasn’t been without obstacles and hardship. By his estimates, he’s had 14 or 15 operations in his lifetime, had to change careers because of his health and is scheduled for yet another surgery on June 13 at Cleveland Clinic.

On the flip side, Kevin passed his last exam at Erie Community College last Monday and will graduate tomorrow with his degree as a registered nurse. He plans to take his nursing board exams in the next few weeks.

“It has been a tremendous journey that has unlimited possibilities to make a difference in the lives of others,” he wrote on his Facebook wall a few days ago.

Asked what he’ll do when he has a chance to greet Walker in person, Kevin didn’t hesitate.

“Oh, my goodness,” he said, “I’d probably start by telling him I can’t say thank you enough. What he did for me literally changed my life. You can’t put a price on that.”

And, what about that 35-year-old, grainy photo of Walker? Well, Kevin still has it, safely housed in a jewelry box in his home.

“At some point,” he said, “I want to share with my boys who Mike is and what he means to me.”