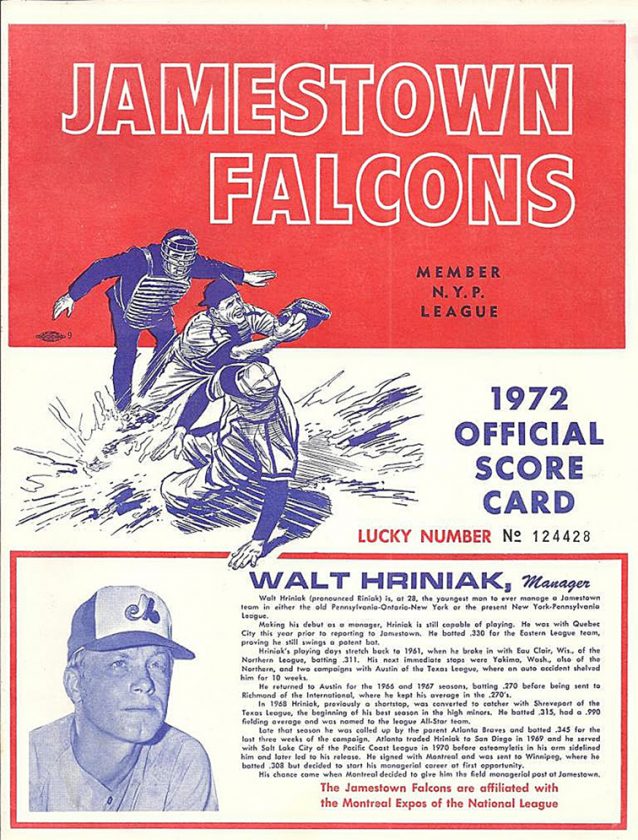 The 1972 Jamestown Falcons were again affiliated with the Montreal Expos. The Expos sent Walt Hriniak to manage their Class A club. Hriniak was a disciple of hitting guru Charlie Lau, author of the instructional book, “The Art of Hitting .300.” Hriniak ultimately became a major league hitting coach with the Red Sox and White Sox. Hriniak successfully applied Lau’s techniques to his team. The ’72 Falcons led the NY-P League in batting with a team average of .266. First baseman Cannon “Boom Boom” Smith paced the league in three categories with a .319 average, 14 home runs and 56 runs batted in. Other key players for Hriniak were Larry Parrish, who had a 15-year major league playing career before managing the Detroit Tigers in 1998 and 1999, and Don Hopkins, billed as the “fastest man in baseball,” who stole 63 bases for the Falcons. Montreal’s No. 1 draft choice, catcher Bob Goodman, was assigned to Jamestown as well. With their hitting and fielding prowess (the Falcons led the in fielding percentage), the team compiled a 42-28 record, good for third place in the eight-team NY-P League. Lack of good pitching was an issue that prevented a higher finish. Attendance was up slightly from the previous year as more than 14,000 patrons witnessed the action at College Stadium.