Angeletti Does All The Right Things For Panama, On And Off The Court 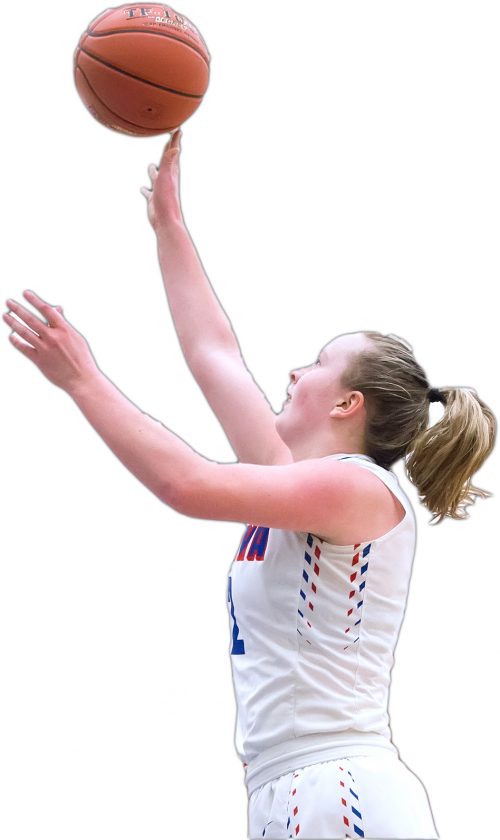 Off the court, Natalie Angeletti is one of the quietest and most polite high schoolers you’ll find.

On the court, she’s a beast.

The 6-foot forward closed her Panthers career as the school’s all-time leader in both scoring with 1,751 points and rebounding with 1,314.

She also recorded 243 steals, 169 assists and 125 blocked shots throughout her six-year Panama career. 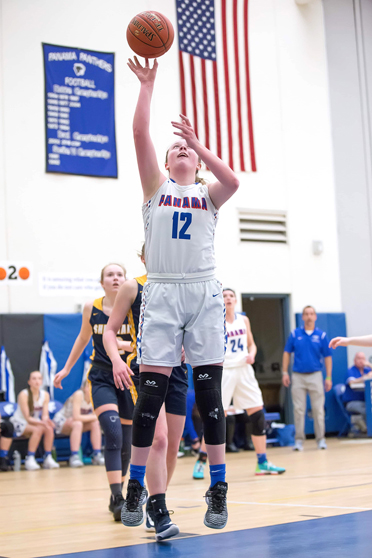 Panama senior Natalie Angeletti averaged 16.5 points and 12.7 rebounds per game this season en route to being named The Post-Journal Player of the Year. Photo by Debbra Bailey

Angeletti was a New York State Sportswriters Association Second-Team All-Star as a junior, a Third-Team selection as a sophomore and a Sixth-Team choice as a freshman.

She was a First-Team Post-Journal All-Star each of the past three years.

In junior high, Angeletti had the obvious size to be an inside presence at the varsity level despite her age.

“It’s been such a blessing to be a part of it,” Panama head coach and Natalie’s father, Jeff, said Friday afternoon.

“That’s why I got into coaching 12 years ago with Upwards Basketball,” Angeletti added. “Nat was a kindergartener at the time and we had her playing at the second-grade level.”

But her skills have developed into an all-around player by her senior year.

She added ball handling, passing and outside shooting to her repertoire, and as she did, colleges and universities began to notice.

“She’s worked really hard on the outside shot,” Angeletti said. “We’ve had teams where we needed her inside, but this year we really need her there to have an outside presence.”

“She’s always kind of had that outside arsenal, but never really needed to use it until this year,” Angeletti said. “I know that will be called upon at the college level.”

She was a part of three Panthers Class D state Final Four teams early in her career and had Panama possibly heading back to Hudson Valley Community College in Troy this spring if not for the coronavirus pandemic ending those dreams.

Regardless, Panama’s season and those of seniors Angeletti and Kylie Schnars will be remembered for a long time.

“To have Brittany Lenart and Taylor Bowen early in her career was so important for her to see and be a part of. She was a manager when those girls were coming up through the ranks,” Angeletti said. “To see how they interacted at practice and how hard they worked, they were unbelievable role models.”

It’s not surprise then, that Angeletti had worn No. 12 — Lenart’s number — since her first full year at the varsity level and will continue to wear it next year with the Wildcats.

“Coach (Jenepher) Banker at Daemen is calling and texting her a lot, and eventually asked what number Nat would like,” Angeletti said. “It wasn’t even a question that it’d be No. 12. The coach asked her some background about it and it was neat to hear Nat’s take on it.”

Panama then went 10-0 in CCAA Division 2 West competition and Angeletti had double-doubles in six of those games.

In the postseason, Angeletti had 24 points and 21 rebounds in a 39-point Section VI Class D semifinal win over Clymer before having 18 points and 17 rebounds in a championship game victory over Sherman — the Panthers’ third win over the Wildcats this season.

For being one of the most well-rounded players in the area and leading Panama to its fifth sectional title in seven years before their season was cut short, Angeletti is the 2020 Post-Journal Player of the Year.

“Her character and to see how she conducts herself on the court has made me the most proud,” Angeletti said. “We’d be down in Washington D.C. or Louisville and when a player on the other team would get knocked down, she’d be the first to extend that hand.

“Those are the kinds of things,” Angeletti continued, “that are awesome to be a part of.”