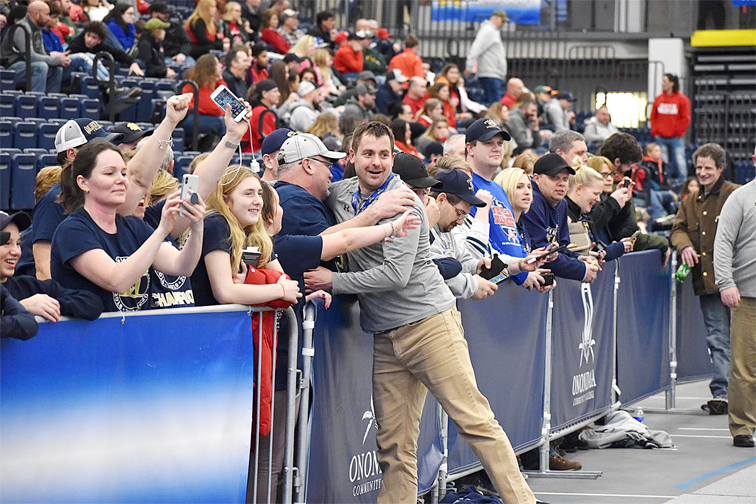 Over and over again Drew Wilcox has proven to be the top wrestling coach the Chautauqua-Cattaraugus Athletic Association has to offer.

No doubt, Falconer/Cassadaga Valley’s head man has a lot of help on his staff, but the Golden Cougars’ success for the past decade has centered around Wilcox.

Individual success at state tournaments has followed Wilcox’s kids year after year, but this season Falconer/Cassadaga Valley reached a new level with regard to team success.

Falconer/Cassadaga Valley opened its day at Onondaga Community College’s SRC Arena with a 51-31 victory over Palmyra-Macedon and followed that up with a 45-33 win over Central Valley Academy. 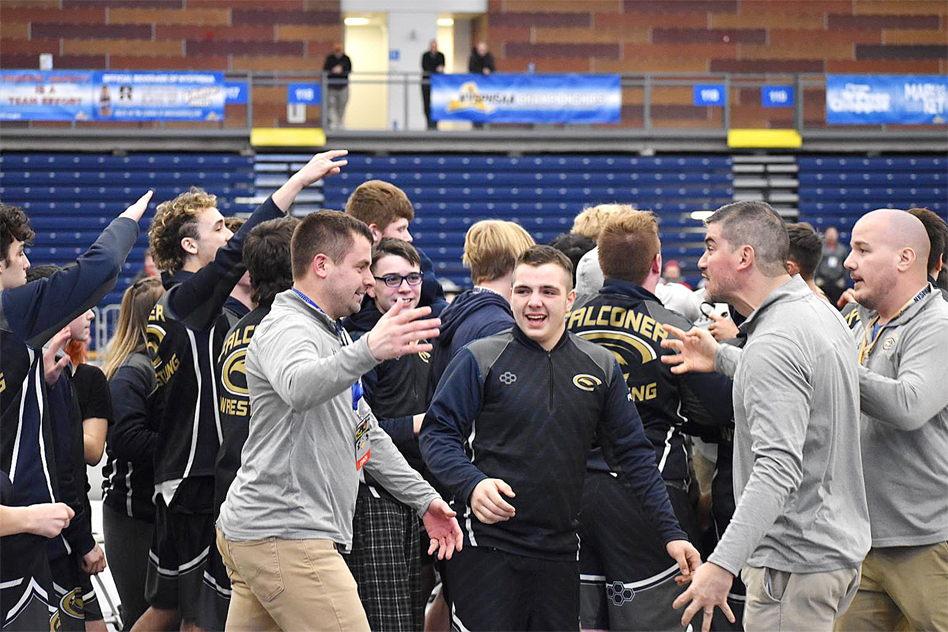 The Golden Cougars won their semifinal bout, 42-30, over Clarke to earn a spot in the finals against Mount Sinai.

That’s when things got really interesting.

Falconer/Cassadaga Valley held a 9-6 lead after three matches, but Mount Sinai went on a 27-7 run over the next seven weight classes to lead 33-16 following Joe Goodrich’s 19-4 technical fall at 182 pounds.

Things looked bleak for the Golden Cougars with five weights to go.

Collin Mower took care of his opponent in 5:44 at 285 pounds to give Falconer/Cassadaga Valley at 34-33 lead with two bouts remaining.

But a Mount Sinai pin by Brayden Fahrbach at 99 pounds gave the Mustangs a 39-34 lead and left the Golden Cougars’ hopes in the hands of 106-pounder Brayden Newman.

He did not disappoint.

The junior took down Derek Menechino in 1:49 to give his team a one-point victory and its first state title.

“(Coach Wilcox) said, ‘Go out there and be calm and believe in yourself,'” Newman said after the match. “He goes, ‘I want no one else in this situation but you.’ He said, ‘You’re the guy for this, go get it done.'”

In a predominantly individual sport, Wilcox figures out a way to get his wrestlers to compete for each other, and for team success.

“This is by far the best accomplishment our program has every had,” Wilcox said following the state dual win. “This is unbelievable. I probably have 25 kids on my team or maybe more who will never see an individual state tournament. For them to be able to experience this, every single one of them is in that room busting their butts every single day. For them to be able to experience something like this is something they’ll never forget.

“I’m so happy and thankful that they started this tournament,” he added. “I’m so happy for all of those kids, they earned it.”

Junior 126-pounder Joey Pillittieri went 46-8 and junior 195-pounder Brock Johnson went 36-6, both taking fourth at the state qualifier, as did Mower, who finished 34-13 on the season, and Beichner, who finished 39-13.

For always getting the most out of his wrestlers individually and this year turning that into statewide success, Wilcox is once again The Post-Journal’s Wrestling Coach of the Year.