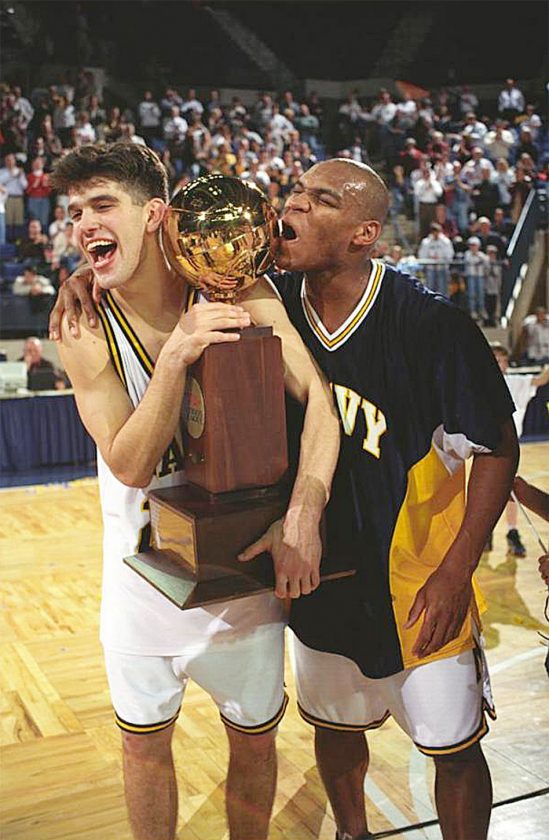 The decades-old video, which appears on the Chautauqua Sports Hall of Fame website, is all of 9 seconds in length, but it shows a side of inductee Maceo Wofford (Class of 2017) rarely seen on the basketball court.

The site is McElrath Gymnasium at Jamestown High School. The Red Raiders’ opponent is Orchard Park. The date is early December 1998. Wofford’s teammate, Henry Leeper, grabs a rebound, takes a couple dribbles up the right side of the court, passes to Ron James who takes two more dribbles and lofts an alley-oop pass toward the hoop.

Wofford, the electrifying senior all-state guard, jumps, grabs the basketball out of the air and throws it down with a thunderous two-handed dunk, which sends the Event Staff student section into a frenzy. The normally stoic Wofford hangs on to the rim for a split second before landing on the hardwood and doing a couple celebratory pirouettes as he heads back down the court.

The emotional outburst is out of character for the usually even-keeled star. 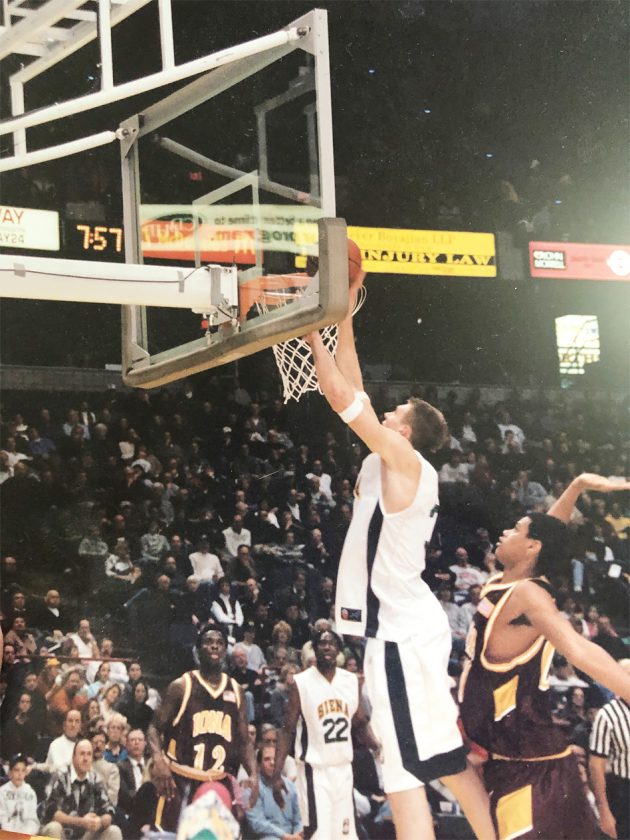 On that same CSHOF site is a Wofford photograph, which shows him in an Iona College jersey. His hands are balled into fists at his waist as he screams in celebration after assisting on a teammate’s 3-pointer during a 2001 NCAA Tournament first-round game against Mississippi, a contest the Gaels, a member of the Metro Atlantic Athletic Conference, lost, 72-70.

“I came down, the Ole Miss guys hadn’t seen me as a (point guard),” recalled the now 40-year-old father of two earlier this week. “They thought I was a slacker, but I hit them with two cross-over (dribbles) and drove to the right, toward the basket. The strong-side (defender in the corner) helped and I bounce-passed it around him to (a teammate) and he hit a 3.”

“As most coaches would say, body language tells a lot,” said Wofford, who was also a member of the Gaels’ team that faced Maryland in the 2000 tournament. “I was excited for the other guys.”

There was supposed to be a lot of excitement this weekend, too.

It was supposed to be the NCAA Tournament’s Sweet 16. 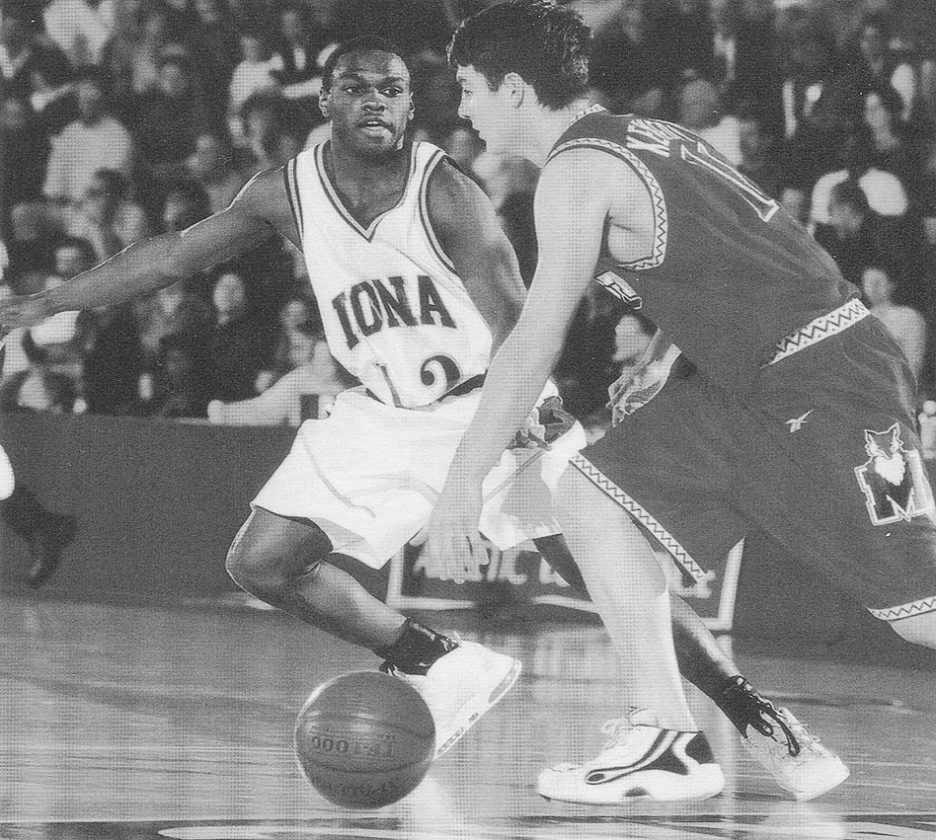 But it was canceled.

The coronavirus saw to that.

“To not have college basketball on TV is a bummer for a lot of people, just for the simple fact it’s very entertaining,” Wofford said.

“It was disbelief,” he said. “From a selfish standpoint, it’s just the void. This is literally my favorite time of year. In addition to that, my heart breaks for all the kids who aren’t going to experience that. For Siena’s sake, they ended up winning the conference title (by default) and had a legitimate shot to make a run in the Big Dance. I think about the seniors. That might have been their only chance to make it.”

“We started clicking at the end of the year,” Miller said. “We knew we were a hell of a defensive team, but we had struggled on offense. We were fortunate. We played really well in the (conference tournament). … We won four games in four days on our homecourt. It wasn’t until we beat Alcorn State in the play-in game that we actually broke .500.”

A couple days later, Miller found himself on the floor against Maryland, a No. 1 seed, and the eventual national champion.

“Having police escorts to practices and games, just the crazy amount of media, the fanfare and the support from the school, the whole experience is difficult to find a favorite part,” said Miller, who works in sales and now lives in Bemus Point. ” … I tell everybody, aside from my son being born, playing in the NCAA Tournament was probably my best experience.”

Now 38, Miller moved back to the area last June with his wife, Kate, and their son, Corbin, 5.

“He likes to grab the ball and dribble it around the house,” Miller said.

Heary, who was inducted into the Chautauqua Sports Hall of Fame in 2009, played in a pair of NCAA tournament games — the Midshipmen suffered a 75-61 loss to Utah in 1997 and an 88-52 setback to North Carolina in 1998 — against the likes of Keith Van Horn, Vince Carter and Antawn Jamison, who all became NBA first-round draft picks.

“To this day when we fill out our brackets and watch the Selection Sunday show, it floods back memories,” said Heary, who lives in Annapolis, Maryland with his wife, Sarah, and their three children, Brooke, Paige and Jackson.

Those memories include Navy winning the Patriot League Tournament championship both years, earning the Midshipmen a place in the NCAA field (“It’s virtually impossible to replicate that in any part of your life,” Heary said); and knowing that Jim Nantz, Billy Packer and Gus Johnson were calling the games on television.

“When you get older and follow sports, you can’t believe that guys like that did our games,” said Heary, now 43. ” … It’s not so much the games, it’s all the little things around the games that you’ve heard about and that you actually get to experience.”

Since leaving the Navy, Heary, who is No. 6 on the school’s all-time scoring list, has been in charge of sales and marketing for CDS Logistics & Transportation Solutions Inc., but he keeps his hand in the game he loves by serving as a radio analyst for Midshipmen games.

That gig afforded Heary an opportunity to take his family to a Duke game at Cameron Indoor Stadium in late December, the day before he worked Navy’s game at Virginia on radio. The Midshipmen stayed close to the Cavaliers for most of that game before falling, 65-56.

Three of Chautauqua County’s all-time greats did just that over the course of the last two days. They would have preferred, however, to be enjoying the games, TV remote in hand, from the comfort of their homes.

“To anyone who is a die-hard watcher, it’s horrible,” said Wofford, who is the chief executive officer of Dribble Kings Training.

Besides that, there are no brackets to fill out or Cinderella teams to root for.

“We just do a fun family pool,” Heary said. “The last two years my daughter (Brooke) has won. She picked Villanova and Virginia to win the championship. It’s in our family for sure.”