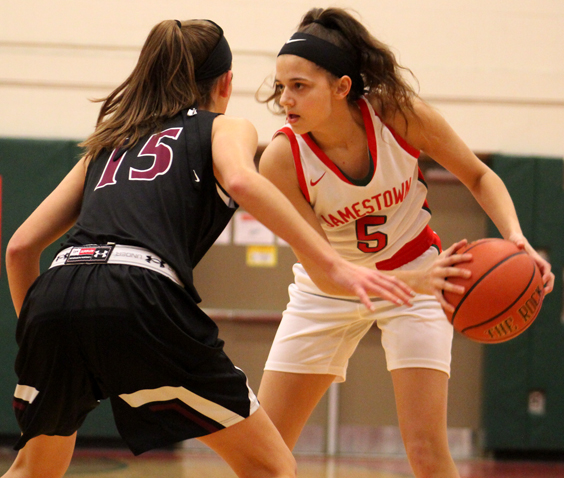 Gary Janas admitted that his Orchard Park girls’ basketball team has a tendency to start slow.

“We’ve been playing better in the first quarter recently, but we traditionally do slump a little bit,” Janas said regarding his team’s five-point advantage at halftime over Jamestown.

But, the coach of Erie County Interscholastic Conference Division 1’s top team still managed to give credit where it was due.

“Really, Jamestown played fantastic today,” Janas said. “In the first two quarters, you could just feel their energy. … It was just a combination of us slumping and Jamestown playing fantastic in that first half.”

But the Quakers woke up in the second half, holding Jamestown to just 16 points in the final two frames to finish with a 74-46 victory at McElrath Gymnasium. 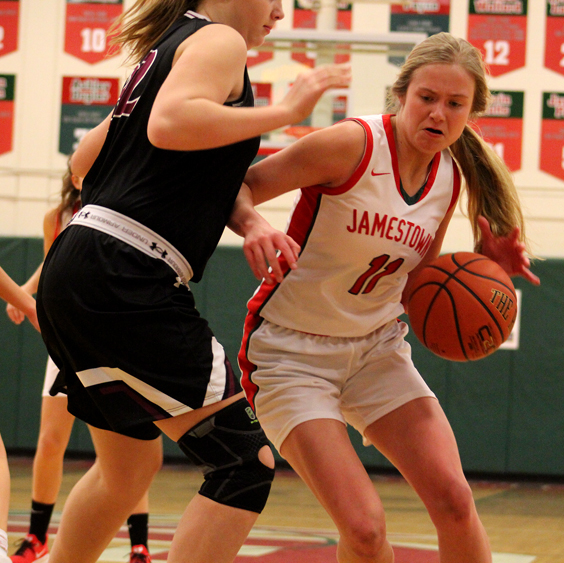 “That’s just a really good team,” Jamestown coach Tim Anderson said after the loss. “I told the girls that we lost by the same amount we lost the first game, but we should build more confidence from this one.”

The Red Raiders opened the game on a 7-2 run thanks to an opening trey by Marley Drake, before four points from Orchard Park’s Madison Stevenson helped give the Quakers a 16-14 advantage after the first quarter. A 3-pointer by Leah Harrigan extended the lead to 19-14 before eight straight points from Jill Kindberg helped Jamestown regain a three-point lead.

But, four second-quarter 3s by Lily Flannery managed to push the Quakers ahead by five at the half — notably a one-handed bank shot from beyond the arc with 0.5 seconds left in the half. The Quakers senior who averages around 14 points per game finished with a game-high 26 including eight 3-pointers.

“I’ve coached her since she was in fifth grade,” Janas said. “She can shoot the 3 anywhere on the floor. She can drive, she can hit a 2, a floater. She’s something special out there.”

“Really, besides (Flannery’s buzzer-beater), it was a two-point game besides that and I was really happy with the effort,” Anderson added.

Janas, on the other hand, was frustrated.

“I told (my team) that Jamestown was making them look like a bad team and letting them outwork us. I told them to take passion in their play and outwork them. I always tell them that if they work their hardest and they lose a game, so be it. But, if you’re not working hard and you lose a game, that’s a shame.”

After allowing back-to-back layups to Kindberg, who finished with a team-high 14, and Mickia Freeney to narrow Jamestown’s deficit to one, the Quakers went on a 14-0 run to take a 49-34 lead to take control of the game and help seal the victory.

“Really, they just imposed their will and there were not a lot of other adjustments we could make to stop some of their talent,” Anderson said. “They have so much of an inside-outside combination and we tried to take away something. We took away the inside and they made every shot they took. Then, we adjusted and they got inside. We’re lacking size and sometimes we have to give away something.”

Still, with the glimpses shown in the first half, Janas was complimentary of the young nucleus — led by Drake, who finished with 12 points — that the Red Raiders will have in the years to come.

“They are all fantastic,” he said. “But Drake, she’s going to be a baller. That girl is going to be something special.”

“I coached against Erinne Cunningham and Nikki Frederickson, so I wouldn’t doubt if her name is hanging up there (on Jamestown’s Wall of Fame) with those girls one day because she has that killer mentality,” he said. “It’s not just her shot and work ethic. You can just see it. To me, that’s a girl I would love to coach. You can see it in her eyes, that killer mentality. A nice girl off the court, but killer instincts on the court.”