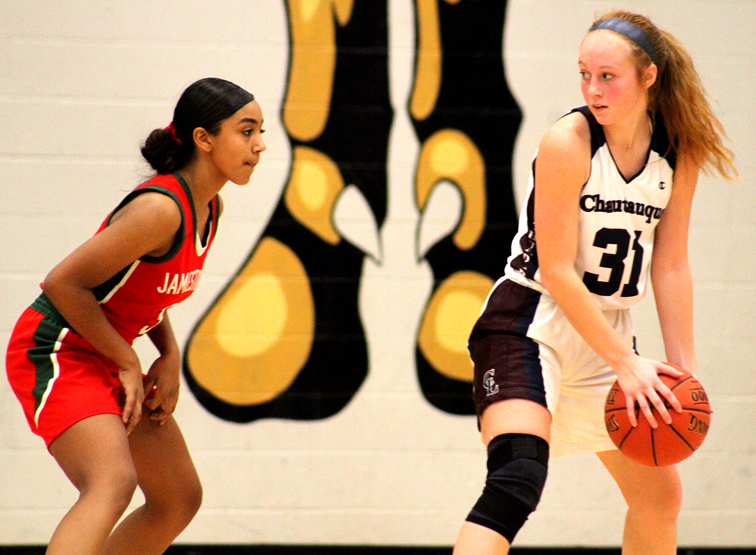 MAYVILLE — Coming into Monday night’s rematch against Jamestown, Chautauqua Lake head coach Bill Persons knew that his Thunderbirds would need to hold one Lady Red Raider in particular, in check.

“Obviously, Marley Drake is a girl for them and is going to be their next big thing,” Persons said of the freshman, who recorded 17 points in Jamestown’s Dec. 7 meeting with the Thunderbirds. “We gave her a lot of attention and just tried to make her uncomfortable.”

Persons’ team did so, holding Drake to just 2 points all night while riding a huge third quarter led by sophomore Lily Woodis en route to a 60-39 victory over the Red Raiders (7-3, 3-1 ECIC Division 1) at home to move to 7-3 overall (3-2 CCAA Division 1 West) on the season.

“Offensively, we just didn’t play hard enough to win against a game against a good team,” Jamestown coach Tim Anderson said following the loss. “There have been teams this year who have tried to deny Marley a lot of times. We just try to get her to keep moving and space out and do things to get her teammates open.” 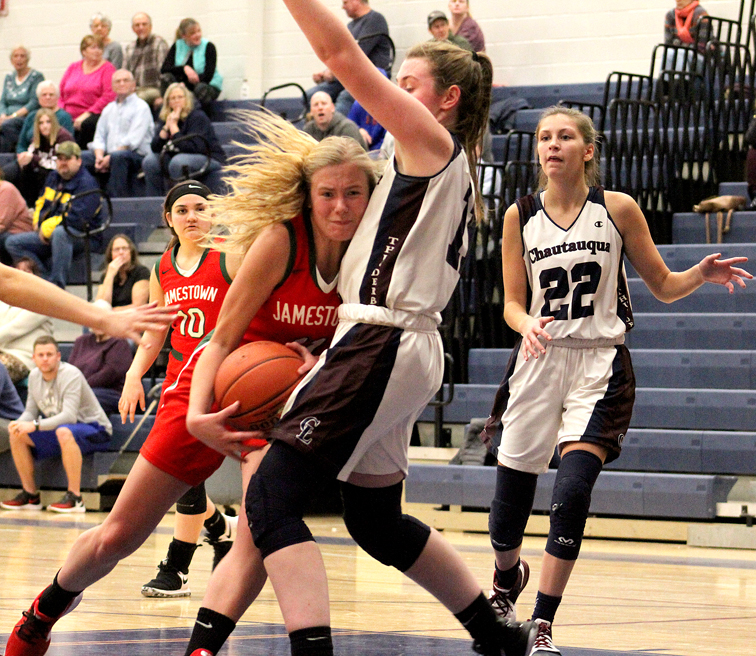 “She’s just sturdy and she’s consistent for them,” Persons said of Kindberg. “She was tonight even. She was tough to stop. I was just trying to have enough help on the girls who had her as possible. I thought, all in all, she had a few second chances, but we just tried to keep her out of the paint.”

“Jill stepped up for a string there, but I just thought we got a little too stagnant offensively and were standing around watching people play one-on-one and didn’t execute as well as we could have,” Anderson added.

Up 19-12 after the first quarter, thanks to three treys by Woodis, the Red Raiders outscored Chautauqua Lake 11-7 in the second quarter, capped by a 3-pointer by Alyssa Holdridge as time expired, to narrow the deficit to 26-23 at halftime.

“We talked about the fact that we should be glad to be down just three,” Anderson said of his message to the team at halftime. “I didn’t think we played our best half by any means. We missed a ton of layups when we had our opportunities. We missed assignments on picking up Woodis and giving up some open threes. I felt pretty good to be only down by three.”

Jamestown continued the run early into the third quarter as Kindberg scored back-to-back buckets inside the paint to give her team a 27-26 lead with 6:56 left in the third quarter, but the Thunderbirds responded with a 21-7 run, capped by nine points by Woodis, to finish the period with a 47-34 lead.

“We came out in the third quarter to make a little bit of a run to take the lead, but it was just an avalanche after that,” Anderson said. “They took the game over and the run at the end of the third quarter killed us and we couldn’t fight back after that.”

“The last three minutes of the third quarter, we were just hitting,” Persons said of the run. “At that time, we were able to go into a full-court press. That stifled them. We just were able to hit a few big ones there in a row, like I said and that kind of put them away for us in that quarter.”

Persons was also pleased with the effort of Woodis — whose night ended early after an unspecified injury early in the fourth quarter.

“She’s a really tough kid,” Persons said of the sophomore. “She’s an unreal player. She’s a great kid to have and her being so young. … She’s just a baller deep down and she just wants to be the one to have the ball in her hands and she definitely put on a good show for us tonight.”

With a huge league test looming on Thursday at Orchard Park, Anderson is hopeful that the Red Raiders will be able to find their rhythm once again.

“We just have to get back to the mental and physical toughness that has carried us this year,” he said. “That’s going to be big for us going forward.”