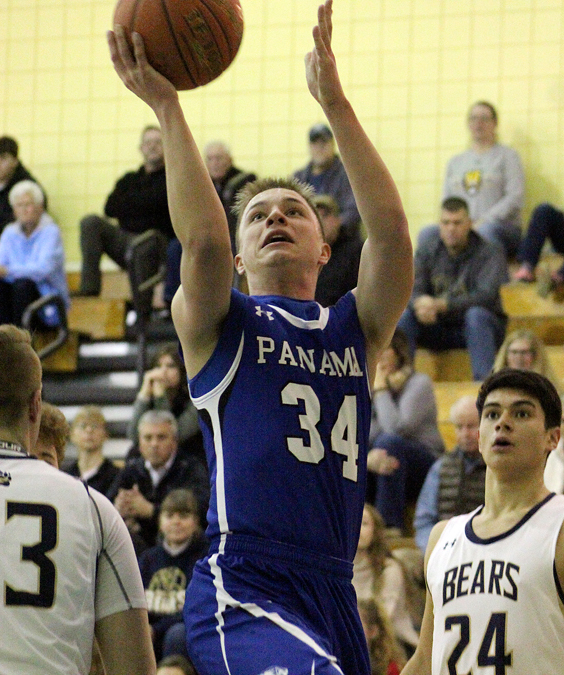 “Cam is drawing all kinds of defenders to him wherever he goes,” Nelson said of the senior after Tuesday night’s Chautauqua-Cattaraugus Athletic Association Division 2 West matchup at Frewsburg.

“We need to make sure we’re doing the little things,” he added.

“It’s not all about (Barmore), but when you’re doubling and helping him out a lot, it leaves other people open and (Panama) took advantage of that,” Frewsburg head coach Tom Nelson said after the game. “That’s to their credit. They made some big shots when they needed them.”

The Bears did not fall easily, however, as 35 points from Brad Nelson kept the Panthers at bay for a majority of the game, trailing by just one at the half.

“I’m proud of him,” the Frewsburg coach said of his senior son’s performance. “He’s worked hard to get to where he is and he’s obviously disappointed. He doesn’t care about how many points he has, he just cares about that final score to be the team to win that.”

“We’re all a little disappointed. I knew it would be close,” he added. “When we were down one at the half, I thought this would go down to the last possession. We let it slip away.”

Nelson helped the Bears pace Panama in the first half, primarily from the foul line — draining 9 of 10 shots from the charity stripe — but a 3-pointer with 34 seconds left in the half gave Frewsburg a 38-36 lead before a subsequent 3 by Cooper, who finished with 14 points, made the Bears’ deficit one going into the locker room.

“We knew Brad was a really good basketball player,” Ed Nelson said, noting that his message at halftime was to contain him on the dribble. “We talked about different defensive adjustments on him. We wanted to make him think a little bit. Luckily for us, things worked out in the second half. Guys did a much better job on him.”

The game remained close throughout the third quarter, but a bucket by Braden Cook, who finished with 13 points, with 1:28 left in the period broke at 50-50 tie to give Panama the lead back for good as the Panthers outscored the Bears 31-14 to finish the game.

“(Hinsdale, Cook and Cooper) did an awesome job,” Ed Nelson said of the effort by his offensive core. “Those guys made some big shots. When they do those little things, it’s hard to defend against us.”

“On the offensive end, we didn’t have some good possessions in that third quarter,” Tom Nelson said of the second half. “We were thinking too much sometimes. … We just didn’t make shots when we needed to.”

Ed Nelson noted that the close game is just another example of what he called a “stacked league.”

“We have great teams our league,” the Panthers coach said. “We battle every night. Playing these Class C teams, these guys are good. They’re making us better and that’s one thing we have to make sure we’re doing at the end of every single night.”

“We had a tough loss Friday night and I was proud of my guys,” he added, referring to his team’s 60-58 loss to Westfield last week. “We wanted to make a statement and bounce back. It was good to have them back.”

CLARENCE — Despite dominating the end of the meet, Jamestown came up just short in an 83-81 Erie County ...