Jamestown’s Jed Hirliman opened the scoring with a goal in the first period. P-J photo by Chad Ecklof

Ten minutes before puck drop, and as Jamestown and East Aurora/Holland warmed up for their Western New York High School Club Hockey League game Saturday afternoon, the music being played over the public address system at Northwest Arena switched to “I Gotta Feeling” performed by Black Eyed Peas.

“If we can put the puck in the net, I think we’re going to come out on top in this one,” he said earlier in the week in a preview of the Red Division contest.

Bergman proved to be prophetic.

Behind two goals and an assist from captain Jack Brinkley, the Raiders knocked off East Aurora/Holland, 4-1, on Senior Recognition Night. 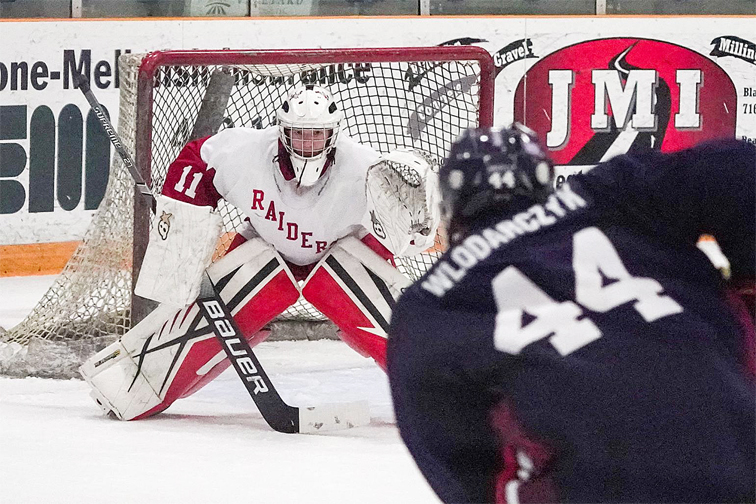 The victory improved the Raiders’ record to 12-5-1 overall and 10-3-1 against division opponents. The win also evened their season series with East Aurora/Holland (9-5-1) at 1-1-1.

“There were a couple moments there where their feet were a little slow,” Bergman said. “I got on the boys and they picked it back up. … We had so many opportunities. We should have had a few more (goals) in there. (The pucks) were laying at the goal line, but we put the ones away that were the most important.”

Jamestown led 1-0 after the first period, courtesy of Hirliman, who received helpers from Brinkley and Brown, on the power play at the 13:18 mark. The score remained that way until about the midway point of the second period when Brinkley found the back of the net, assisted by MacCallum and Guimond, with 10:55 remaining. East Aurora/Holland pulled to within a goal 6¢ minutes later when Jacob Pierce, assisted by Noah Difilippo and Lex Roldan, put the puck past Yost on the power play.

But that was the only goal Yost allowed the rest of the way.

Meanwhile, the Raiders put the game away in the third period as Spielman, who had several scoring chances earlier in the game, finally slipped one past East Aurora/Holland goalie Rhyan Domanowski on an assist by Spillane at the 4:48 mark. For good measure, Brinkley tallied his second of the day unassisted with 1:05 left, giving Jamestown an impressive win on a special day for the graduating seniors.

“Brinkley has been finding the net, especially the last three games,” Bergman said, “and Spielman, he’s just a nat on the other team. He’s always cruising, going to the net, and good things happen. I’m glad to see him get one on Senior Night.”

Both teams had golden opportunities in the final period to add more goals, but neither one could score when presented with 5-on-3 opportunities. In the end, it didn’t come back to bite the Raiders, who recognized seniors Brinkley, Brown, Spielman Will Turner, Luke Tota and Chase Jones in a pregame slideshow.

“It’s been a lot of fun (coaching the seniors),” Bergman said. “I’ve been with the core group here four or five years. … It’s been a really good time. They know what I expect. I can’t ask for a better group of guys, on and off the ice.”