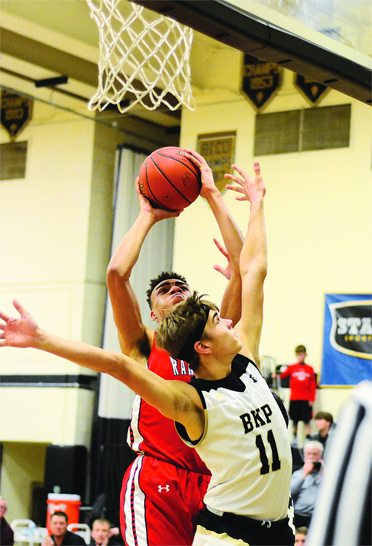 SILVER CREEK — Taking on the sixth ranked team in the state, the Silver Creek Black Knights had a tall task against the Randolph Cardinals on Friday night at Silver Creek High School. So tough, in fact, it took four minutes of extra time for the dust to settle.

But when all was said and done, the Cardinals emerged the victor in a thrilling game.

Randolph (10-1) pushed past the Black Knights (7-5) 63-60 in overtime, with neither team leading by more than seven points at any point in the game. Although Silver Creek led most of the way, the Cardinals did just enough to escape with the victory.

“They’re a great team. They’re the sixth-ranked team in the state,” said Silver Creek coach Ralph Jackson. “We took them to overtime and lost by three, we had our chances. That’s all you can ask, is to give yourself a chance.”

Trailing 63-60 with just seven seconds left, Silver Creek senior guard Dominic Jamison had a chance to tie the game on a tough 3-pointer off an in-bound, but it was just a tad wide, ending the last hope for Silver Creek. Though it wasn’t Jamison’s best scoring effort, his attention was focused somewhere else — guarding Randolph’s star senior Tyler Hind.

Jamison was the one primarily tasked to guard Hind, though he did have help through most of the game. Hind didn’t hit his first field goal until less than two minutes to go in the third quarter. Although Hind ended with 21 points, Jamison and the Black Knights held the Daemen-bound senior.

“He’s one of the best players in Western New York,” Jackson said. “We were trying to keep our focus on him and help whoever was on him. Unfortunately, we let him get to the free-throw line and he doesn’t typically miss. I was trying to switch defenders so the same guy wasn’t chasing him around the whole time, but it got to the point where Dom wanted the matchup.”

Jamison certainly made the most of his matchup, especially in the first half, when Hind seemingly couldn’t buy a basket, managing five free throws. With the game tied at 30 going into the break, Randolph coach Kevin Hind knew his son’s contributions were coming in other areas, despite the scoring difficulties.

“He wasn’t shooting well, but he had several assists early on. We told him if the other guys are hitting shots, it’ll loosen things up, and other guys stepped up early,” Kevin Hind said.

Tyler Hind, in addition to his 21 points, ended with 10 boards and 10 assists. The shots Hind did make though were effective. With his team trailing 56-51 with just over a minute to go in regulation, Hind was able to bury a layup, come up with a steal, and finally hit a 3-pointer — his only one of the game — to tie it. Into overtime, with Randolph trailing 60-58, Hind went to the line for two free throws. Hind sunk the first one, missed the second, but was able to get his own rebound and put back a layup to give his team the lead, 61-60, on what would be the winning basket.

Despite the loss, Silver Creek was leading for a majority of the game, including 16-13 after the first quarter, and 42-39 at the end of the third. Every time Randolph appeared to be making a run, the Black Knights would answer back with a run of their own. Jackson was proud of his team’s ability to stick with it.

Meanwhile Coach Hind gave all the credit to the Black Knights.

“It was an awesome game. Those guys played incredible,” Hind said. “At halftime, I said I wasn’t sure they were going to keep hitting shots, but they did. I give them a lot of credit, they had a good defensive plan and they executed, but I had guys step up, especially early. That is a good team on the other side and they gave us a game, and in a tough league game on the road, you’re just happy to come out with a win.”

Hind led all scorers with 21 points, while Branson Morrison had 12 for the Cardinals. In addition to blanketing Hind, Randolph’s standout sophomore big man Gabe McCoy was limited to 8 points. The Black Knights were led by Jeremy Wilcox, who had 15 points and seven boards, while Jamison and Spencer Harford each had 13. Jamison added seven assists and Harford adding six rebounds. Sam Braidich added 10 boards for the Black Knights.

The Panthers (7-5, 2-3) separated themselves early with a 16-3 first quarter and led 31-8 at halftime, receiving contributions throughout the game from Dalton Tobola and Zayne Tarr, who each added 12 points. Griffin led the team with six rebounds while Tobola had six steals. Mike Stillman led Portville with six assists.