Red Raiders Win Another Close One 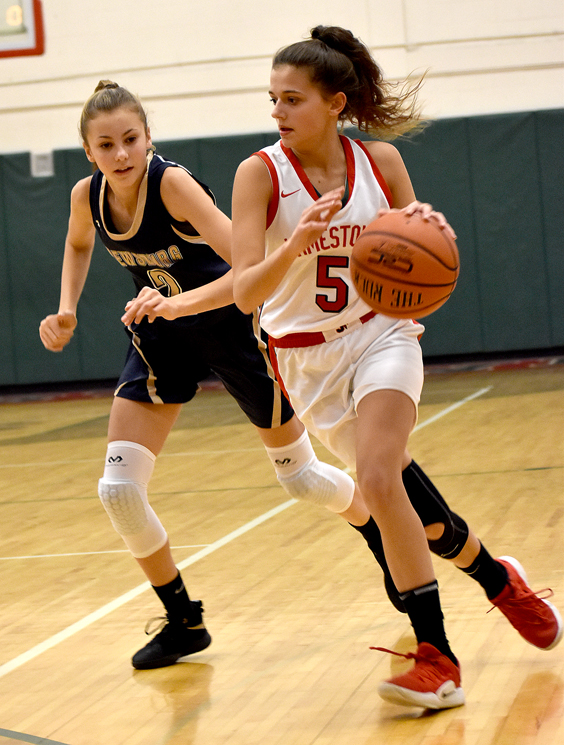 After losing three senior stalwarts to graduation a year ago, Jamestown head coach Tim Anderson knew his young team would have to learn how to win this season.

The Red Raiders picked up some valuable lessons in their first two games — and were successful in the process.

Jamestown outscored Frewsburg 18-10 in the fourth quarter en route to a 48-46 victory to capture the United Way Tournament on Saturday night at McElrath Gymnasium.

The win came just 24 hours after the Red Raiders stormed back in the fourth quarter and overtime to stun Fredonia in the opening round.

“We have a pretty young, inexperienced team. I knew we were going to be sloppy at times,” Anderson said. ” … To have the mental toughness to stick with it and not give up down double digits late in games … we made it a goal to get to the championship game and tonight we wanted to win it on our home floor.” 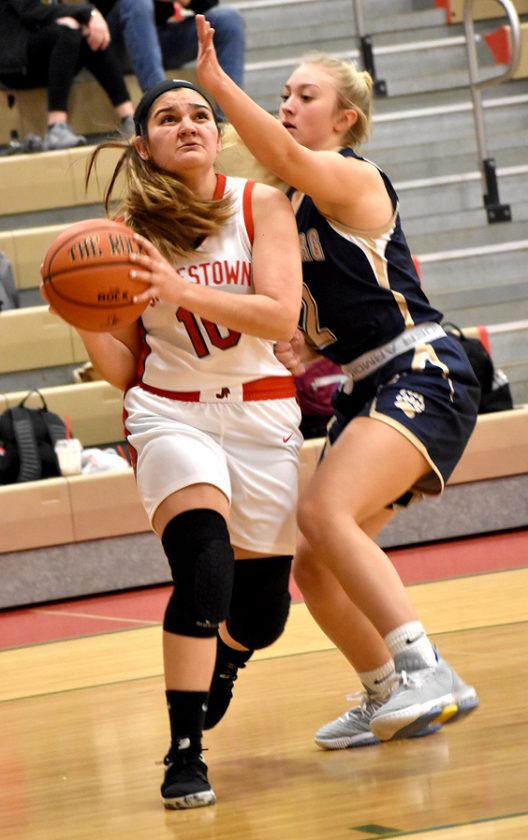 Jamestown trailed 36-30 entering the final eight minutes Saturday, but a three-point play by junior Jill Kindberg and a 3-pointer from freshman Mickia Freeney tied the game at 38 with six minutes showing on the clock.

The Red Raiders took their first lead since the score was 6-5 on a Freeney bucket with 4:55 left. Jamestown freshman Marley Drake then answered a Mikayla Gabalski-Jones 3-pointer with one of her own to give the hosts a 43-41 lead with 3:38 remaining.

Bears sophomore Elise Sposato and Gabalski-Jones converted Red Raiders turnovers into baskets to give Frewsburg the lead back at 45-43 with 2:30 remaining, but another Freeney bucket tied the game at 45 with 1:55 left.

“With three minutes left, it was a tie game and somebody had to make a play,” Frewsburg coach Jeff Collver said. “It was either us or them. They made play after play after play.”

Kindberg gave Jamestown the lead for good at 47-45 when she converted a fourth-chance opportunity with 51 seconds left.

Gabalski-Jones and Kindberg traded free throws later to make it 48-46, but Frewsburg was unable to cash in on a baseline drive in the final seconds.

“If you can’t knock down shots,” Collver said, “you aren’t going to win.”

Kindberg led the Red Raiders with 13 points to go along with six rebounds and three steals, and was named to the all-tournament team. Drake followed up her 22-point Friday showing with another 12 points, three rebounds, three assists and three steals en route to being named the tournament’s Most Valuable Player.

“We just want to continue for her to build her confidence,” Anderson said of Drake. ” … She took some tough ones in the second half and made a big, deep 3 later in the fourth quarter.”

Sposato led Frewsburg with 16 points and 10 rebounds to go along with seven steals and three assists on her way to being named to the all-tournament team.

“She’s one of the kids that has filled the starting spot we lost last year when Gabby (Iuculano) graduated,” Collver said of Sposato. “We definitely look to her to score.”

“As hard as it is to lose a game you feel like you should’ve won, you learn from the mistakes,” Collver said. “You don’t learn a lot from the wins.”

Kazlin Beers had a career-high 24 points, 13 rebounds, five assists and three steals as Fredonia beat Tapestry, 67-37, in the consolation game at McElrath Gymnasium.

Nagely Vazquez added 16 points, 11 rebounds and four assists while Anna Buchanan had 10 points and four rebounds for the Hillbillies.

Fredonia led 16-4 after the first quarter and 34-17 at halftime before pulling away with a 19-9 third quarter.

Beers and Smith were their respective team’s representatives on the all-tournament team.