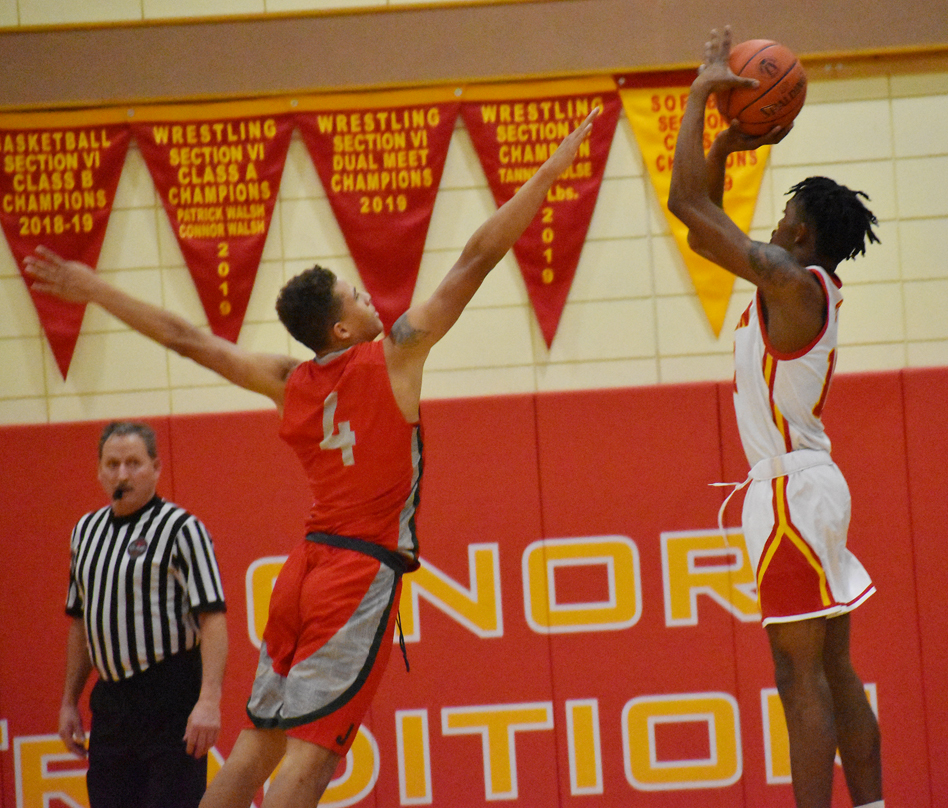 OLEAN — On any other hardwood on any other afternoon, Jamestown junior Demarri Jones would have been the headliner, because the young man put up the kinds of numbers Saturday that most high school basketball players can only dream about.

And then Olean senior Covi James turned in a performance for the ages.

The 6-foot-2 guard/forward poured in 46 points, including the game winner at the buzzer, sending the Huskies to a thrilling 80-78 overtime victory over the Red Raiders in the championship game of the 28th annual Olean Huskies Tip-Off Tournament.

It may be at least another 28 years before anyone puts on a display like James did in helping the Huskies (2-0) secure their 80th straight home victory.

In a contest worthy of a Section VI playoff game instead of a season-opening tournament, James scored 20 of Olean’s final 22 points, doing it from beyond the arc, from the foul line and on drives to the basket. The amazing part was that Jamestown (1-1) appeared to have a hand in his face much of the time. 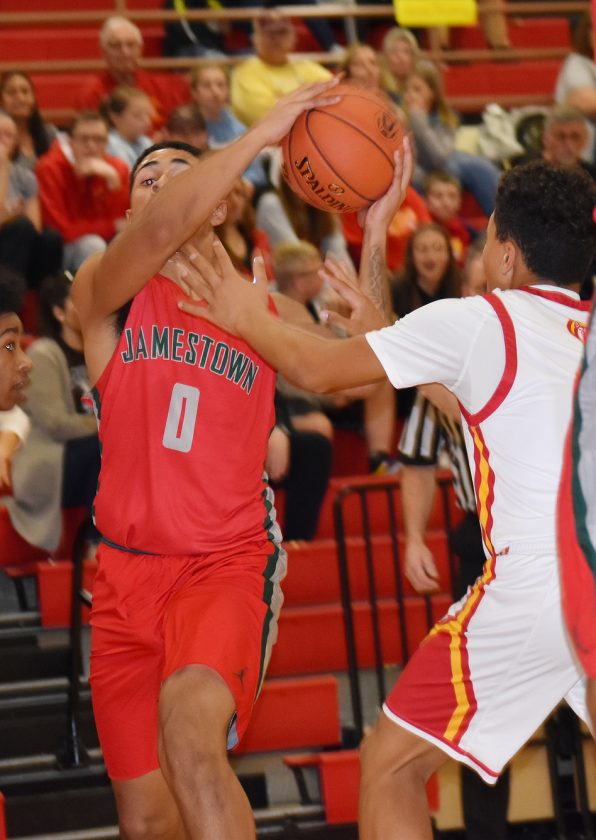 “First of all, that’s not anything to do with coaching or Xs and Os,” Olean first-year coach Tim Kolasinski said. “You can’t diagram the things he was doing. A lot of times, it was off the script and he was making plays that were there to be made. He came ready to play, he was dialed in today. He made an array of shots.”

As it turned out, the Huskies needed every one of them.

“I don’t remember a guy ever scoring 46 points on us,” said Jamestown coach Ben Drake, who is beginning his 22nd year at the helm. ” … It was an awesome individual performance he had. We gave him some shots early that got his confidence up. … He put on a show tonight.”

The Red Raiders did their best to spoil that premiere. 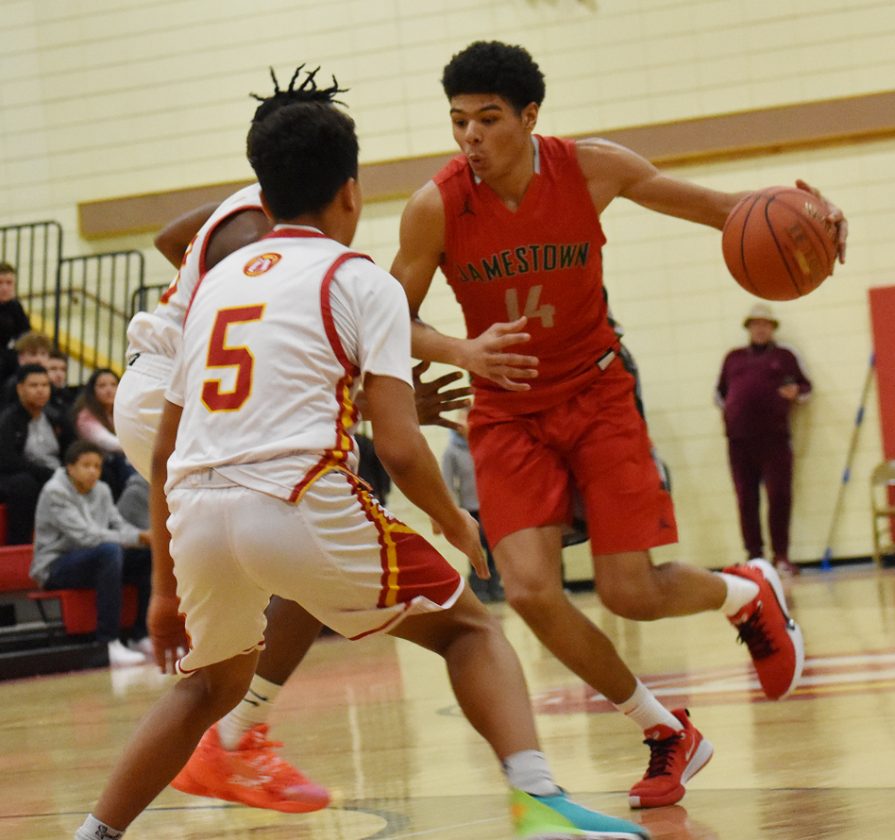 But after Jones’ layup with 13.9 seconds remaining in overtime tied the game, 78-all, it was to nobody’s surprise who was going to make a play on the Huskies’ ensuing possession. And James didn’t disappoint the Huskies’ faithful, securing the ball after a scramble and lofting a shot from the lane that found the bottom of the net for his 16th, and final, field goal.

That effort spoiled what was a tremendous performance by Jones. One night after scoring 20 points in a four-point victory over Tapestry, the 6-4 forward poured in 25 points, hauled down 19 rebounds, had four assists, blocked a shot and took a charge.

“Demarri played great all weekend,” Jamestown coach Ben Drake said. “We have to keep going to him, because he is strong and he’s a good finisher around the basket.”

James, who did not play in Olean’s victory over Southwestern in a first-round game on Friday, finished with six 3-pointers and was 8 of 9 from the foul line. He also kept the Huskies in the game early, scoring 11 points in the first quarter when Jamestown took a 20-14 lead.

By halftime, the Red Raiders’ advantage — courtesy of 10 points by Jones — stood at 37-29, but Olean went on a 23-10 third-quarter run, highlighted by 9 points from James, to take a 52-47 lead into what would be a wild final regulation period.

Down by as many as eight points early, Jamestown went on a 10-0 run, capped by Rojas’ layup on a beautiful pass from Jones, to take a 57-55 lead at the 4:41 mark. That was the first of eight lead changes in the final four and a half minutes.

Both teams had a chance to end the game in regulation, but Rojas missed two free throws with 3.9 seconds and the game tied 69-all and Olean’s Kamdyn McClain had his shot blocked by Jones as time expired.

In overtime, the Red Raiders scored the first two buckets — Leeper on an assist from Jones, and Jones from in close — but James drilled back-to-back 3-pointers, giving Olean a 75-74 lead with a minute left. Leeper responded with a baseline jumper only to have James convert a traditional three-point play to put the Huskies back on top, 78-76, with 36.9 seconds remaining.

Rojas was fouled on a strong drive to the hoop on the Red Raiders’ next possession, and missed both free throws, but Jones secured the rebound for Jamestown and converted a layup to tie the game, 78-all, with just under 14 seconds left.

Then James took care of the rest.

“When a guy has that many points, you have to be all over him,” Drake said. “We just gave him too much space. We had a hand in his face, but you can’t let him get those shots off.”

For Kolasinski, the win was special, because former legendary Huskies coach Jeff Anastasia was in the house to witness the dramatics.

“I have so much respect for Coach and the things he did here,” said Kolasinksi, who was an assistant to Anastasia for 13 years. “It’s really special. It was a great game and a great weekend. It means a lot to have him present. … I know one thing’s for sure, he’s our biggest fan.”

NOTES: The Huskies had nearly as many 3-point field goals (14) as they had 2-point makes (15). … All told, they were 14 of 29 from the arc and 29 of 69 overall. … By comparison, Jamestown shot 33 of 67 from the floor and 5 of 10 from the arc. … Named to the all-tournament team were Kovi James (most valuable player) and Zion James of Olean; Jones and Leeper of Jamestown; Mitchell Pascarella of Southwestern; and Tyriq Eubanks of Tapestry. … Red Raiders freshman Trey Drake appeared to roll his ankle on the game’s final play and had to be helped to the bench. … Jamestown fell to Olean in the junior varsity tournament title game, 68-61. Andrew Maple had 22 points to lead the Red Raiders (1-1). … Jamestown returns to action Tuesday when it entertains Frontier in its Erie County Interscholastic Conference Division 1 opener at McElrath Gymnasium. … In the consolation game, Tapestry knocked off Southwestern, 84-58.