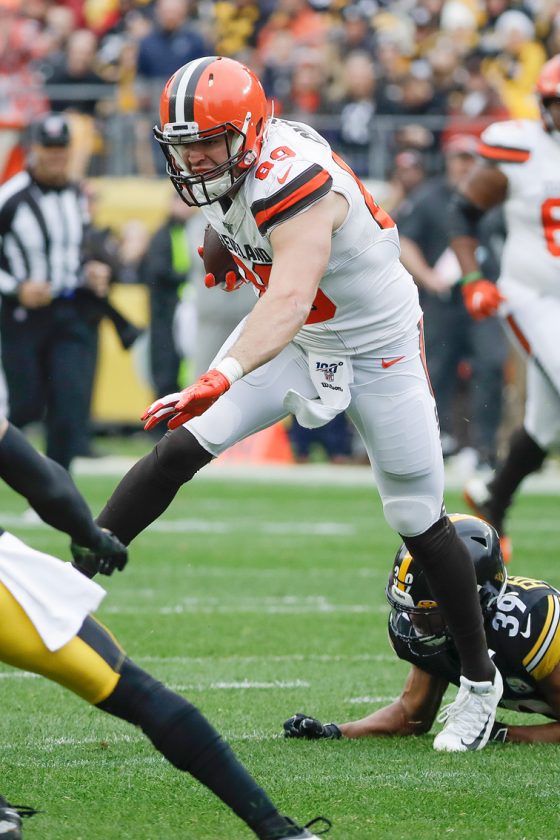 And one very loud statement from the banged-up Pittsburgh Steelers written not on a T-shirt but all over the Heinz Field turf: The faces may change when Cleveland visits Pittsburgh. The result does not.

Undrafted rookie free agent Devlin “Duck” Hodges threw for 212 yards with a touchdown and an interception, fellow rookie Benny Snell ran for 63 yards and a score and the largely anonymous Steelers (7-5) surged past the Browns 20-13 on Sunday. The hosts exacted a measure of revenge for its ugly, brawl-marred defeat in Cleveland two weeks ago by keeping the Browns (5-7) winless in Pittsburgh for 16 years and counting.

Yet the Steelers remain in the middle of the playoff chase after rallying from 10 points down thanks in large part to Hodges, a champion duck caller in his down time now 2-0 as starter. Bumped to the top of the depth chart last week in place of struggling Mason Rudolph, Hodges completed 14 of 21 passes and hardly played like a guy cut at the end of training camp. 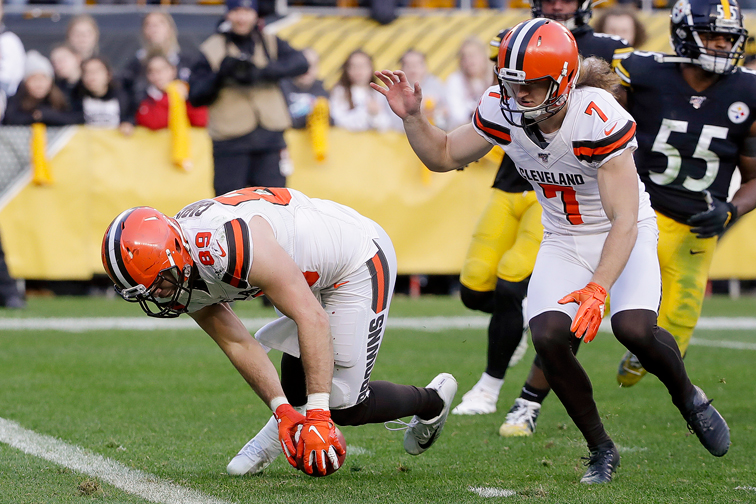 “I’ve always believed in myself,” Hodges said. “I know I have people in my corner who believed in me. Even the guys on the team, when I was let go, I had a bunch of them text me and say, ‘Hey, this isn’t over for you.'”

It might be for the Browns (5-7), who saw their three-game winning streak come to a crashing halt. They were outplayed over the final three quarters by a Steelers team riddled with injury and inexperience at the offensive skill positions. Cleveland likely now needs to win out and get some help to reach the playoffs.

“No one is coming to save us,” Cleveland defensive tackle Sheldon Richardson said. “It’s too late in the season for that. We’re all we got.”

The Browns had their chances. Cleveland took an early 10-0 lead but sputtered the rest of the way. Baker Mayfield completed 18 of 32 passes for 196 yards with a touchdown and an interception, and played the second half with his right (throwing) hand in a protective glove after smacking it against the face mask of Pittsburgh linebacker Bud Dupree.

Mayfield declined to blame the injury, which the Browns described as a bruise, as a reason behind his so-so second half. Mayfield went 8 of 15 for 98 yards after getting hurt, his final throw a wayward toss in the direction of Jarvis Landry that Steelers cornerback and former Brown Joe Haden picked off with 1:06 remaining. Nick Chubb ran for 58 yards and Kareem Hunt added 65 total yards and a touchdown reception. But Cleveland failed to pull even with the Steelers in the AFC North and sweep the season series from its rival for the first time in 31 years.

“PITTSBURGH STARTED IT” … AND FINISHED IT

The teams’ first meeting on Nov. 14 ended with an ugly altercation between Cleveland defensive end Myles Garrett and Rudolph that ended with Garrett hitting Rudolph in the head with Rudolph’s helmet. The ensuing fallout — which included Garrett being suspended indefinitely; Rudolph fending off Garrett’s allegation that he used a racial slur shortly before things got out of hand; suspensions for Browns defensive end Larry Ogunjobi and Steelers center Maurkice Pouncey — reignited a rivalry that’s been dominated by the Steelers since Cleveland returned to the NFL a generation ago.

Just in case it needed a little more stoking, Browns coach Freddie Kitchens was spotted wearing a “Pittsburgh started it” T-shirt on Friday night. Several Steelers responded with some inauspicious wardrobe choices while walking into work on Sunday.

“I think it was pretty stupid,” DeCastro said. “It’s a lot of bulletin board material. I don’t know why you do that as a coach. I just don’t get that. Of course it’s going to motivate us. What are you thinking? It’s just not smart.”

Kitchens, who said he wore the shirt at the request of his daughters, downplayed the notion his fashion sense had any effect on the outcome.

“The T-shirt didn’t cause us to give up 40-yard passes,” Kitchens said. “We were ready to play. That’s the only thing people need to be concerned about.”

Both teams stressed the need to move on and focus on the playoff mix rather than search for retribution for what transpired in the final minute in Cleveland. For the most part, they kept their promise. There were no post-play jawing sessions and the only 15-yard penalty came on a roughing-the-passer call against Dupree on Cleveland’s last drive.

“I think it was very straightforward,” Pittsburgh defensive end Cam Heyward said. “Both teams wanted to win the game. It’s an AFC North game. We just kept fighting for it.”

Cleveland tight end and Jamestown native Stephen Carlson caught two passes for 28 yards in his only two targets on the afternoon. He also downed a punt at the 1-yard line.

Browns: CB Greedy Williams left in the second half with a shoulder injury. CB Robert Jackson exited in the first quarter with an ankle injury and did not return.

Steelers: travel to Arizona next Sunday.