Southwestern running back Tywon Wright leaps over the pile and into the end zone for a touchdown in the second quarter of the Class C Far West Regional football game at SUNY Brockport on Saturday afternoon. The Trojans defeated Letchworth-Warsaw, 54-8. P-J photo by Tim Frank 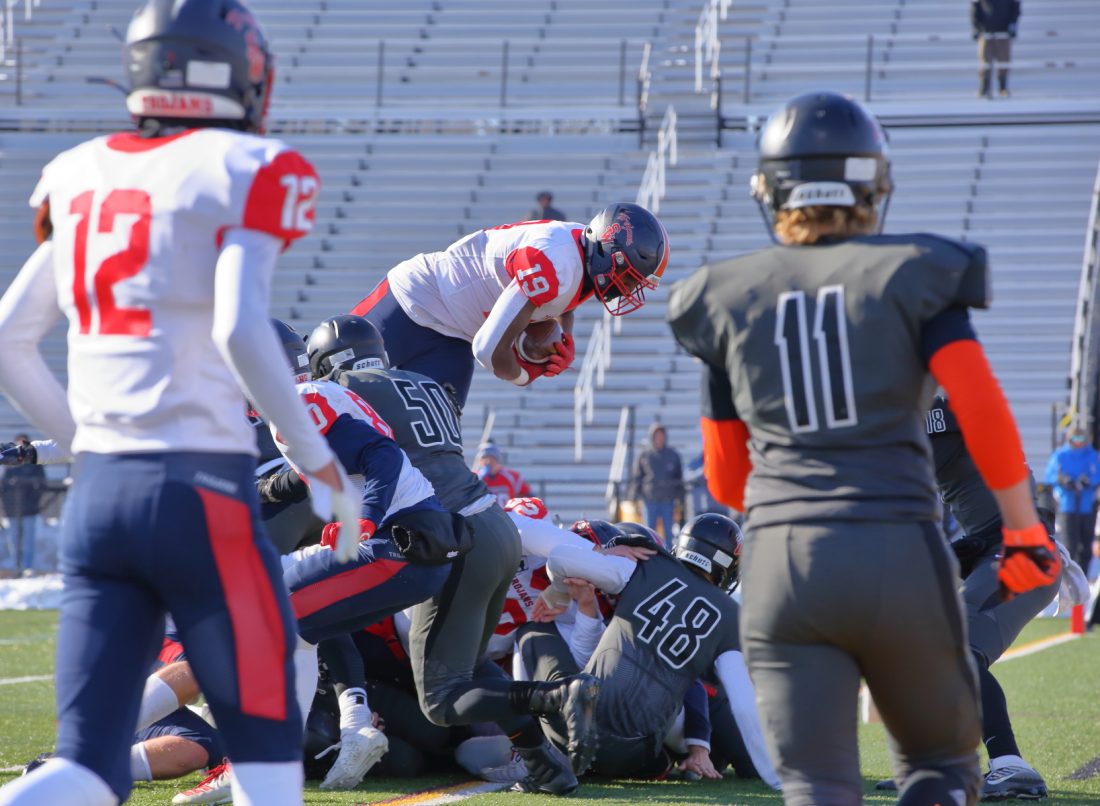 Southwestern running back Tywon Wright leaps over the pile and into the end zone for a touchdown in the second quarter of the Class C Far West Regional football game at SUNY Brockport on Saturday afternoon. The Trojans defeated Letchworth-Warsaw, 54-8. P-J photo by Tim Frank

BROCKPORT — With the first half of Saturday’s Class C Far West Regional in the final seconds and Southwestern at the 1-yard line, it was no surprise to anyone at Eunice Kennedy Shriver Stadium who was going to get the football.

It was Tywon Wright’s path to paydirt that was eye-opening.

The 6-foot-3, 230-pound running back received the handoff from quarterback Aiden Kennedy, went airborne and soared over his linemen for the touchdown to punctuate a I-don’t-believe-what-I-just-saw performance on a brilliant, but frigid, afternoon on the SUNY Brockport campus.

Wright finished with 251 yards on 16 carries and scored five touchdowns — all before intermission on runs of 26, 31, 19, 59 and 1 yards — to lead the Trojans to a 54-8 victory over Section V Letchworth-Warsaw. That dominant performance, behind a stout offensive line, was too much for the Trojans’ Section V opponent, whose only TD came late in the final period.

“It’s my line,” said Wright, who scored three touchdowns in his first four carries. “They take care of the defensive line and I finish it from there.” 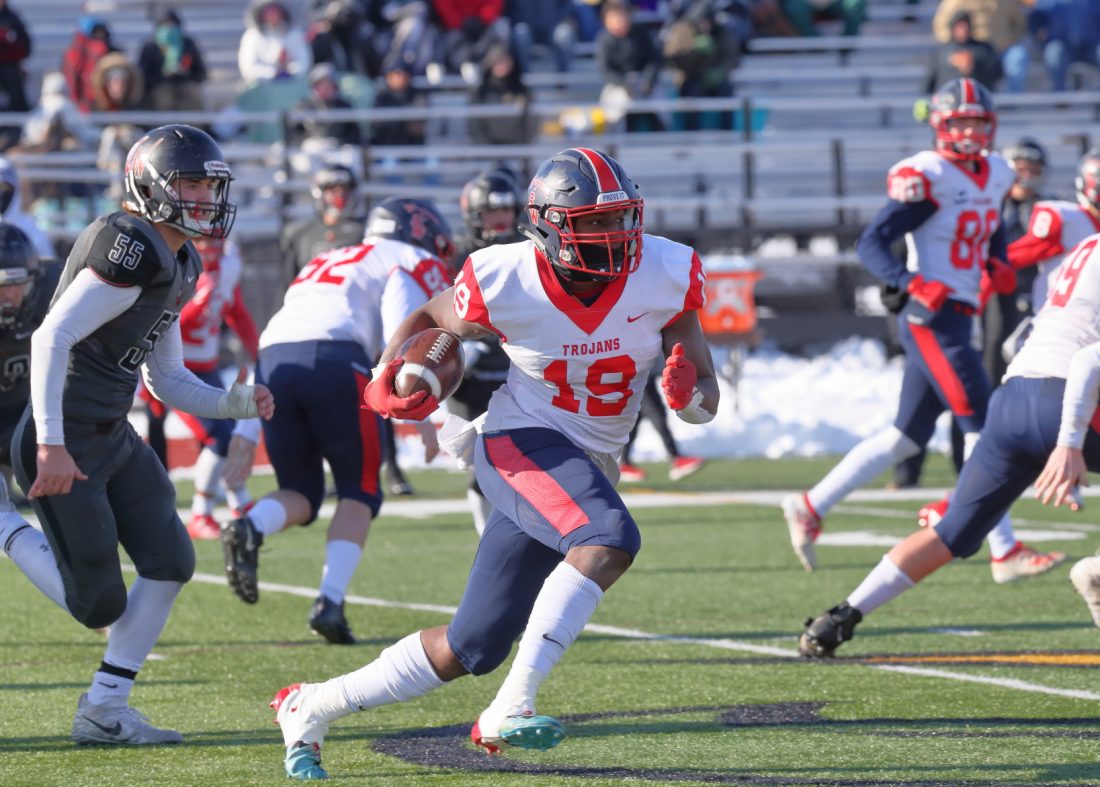 Also scoring touchdowns for the Trojans, who led, 39-0 at halftime, were Zishaun Munir (1-yard run), Conrad Thomas (21-yard run) and Nate Johnson (on a 23-yard pass from Austin Rott).

The headliner, though, was Wright.

In the last two games, the senior has amassed 597 yards and 10 touchdowns. That’s a season for most, but Southwestern interim head coach Jake Burkholder believes his star is only getting better. 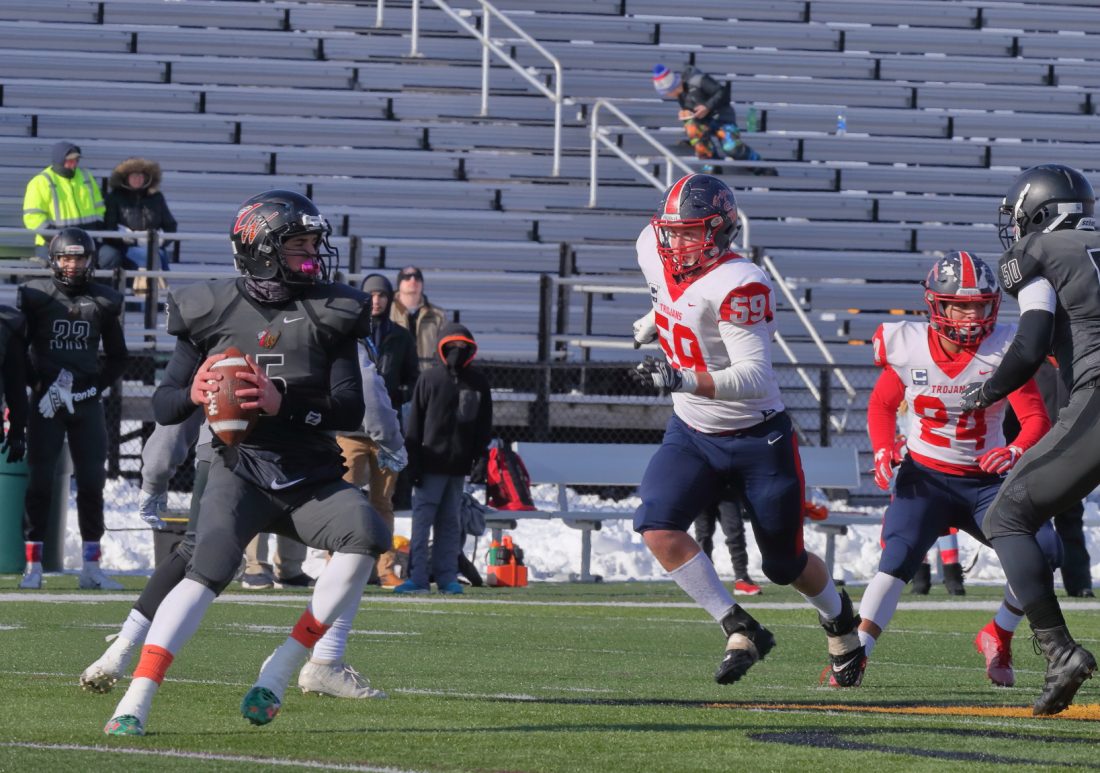 “He’s running as hard as I’ve ever seen him run,” Burkholder said. “He’s got the support of his teammates, he’s a great teammate, everybody is on the same page.”

The offensive line has had a lot to do with that.

“We’ve been working together for so long, and now that we have Tywon … it’s dynamic,” Pannes said.

Southwestern’s first-team defense was pretty dynamic, too, pitching a shutout, led by Pannes, who had nine tackles, including six for loss, and two sacks. Jon Pearson added seven tackles. 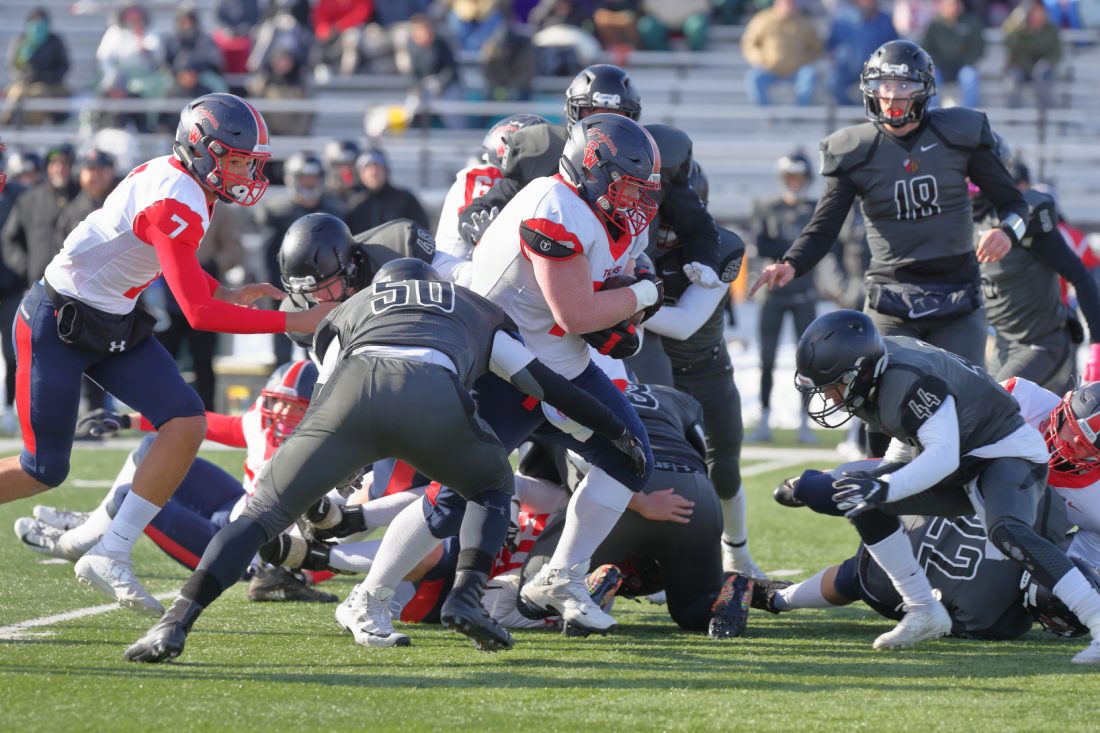 Now it’s on to Cicero-North Syracuse for a showdown with Susquehanna Valley.

“We’re just going to take it week by week and not overlook anybody,” Pannes said. “That’s why we’re successful.”

That success has earned the respect from all corners. In fact, when the game ended, Wright was greeted by a Letchworth-Warsaw player who, in a sign of sportsmanship, congratulated the Southwestern star for his performance.

“We’ve got kids who are willing to work their butts off and put in the time they need to be successful,” Burkholder said. “We just carried that momentum forward.”

NOTES: Kennedy completed 6 of 9 passes for 86 yards and Munir rushed for 32 yards on six carries and caught two passes for 28 yards. … Letchworth-Warsaw (9-2) scored its lone touchdown with 2:05 remaining in the fourth quarter on a 2-yard run by Brett Vasile, who also had a successful two-point conversion run.