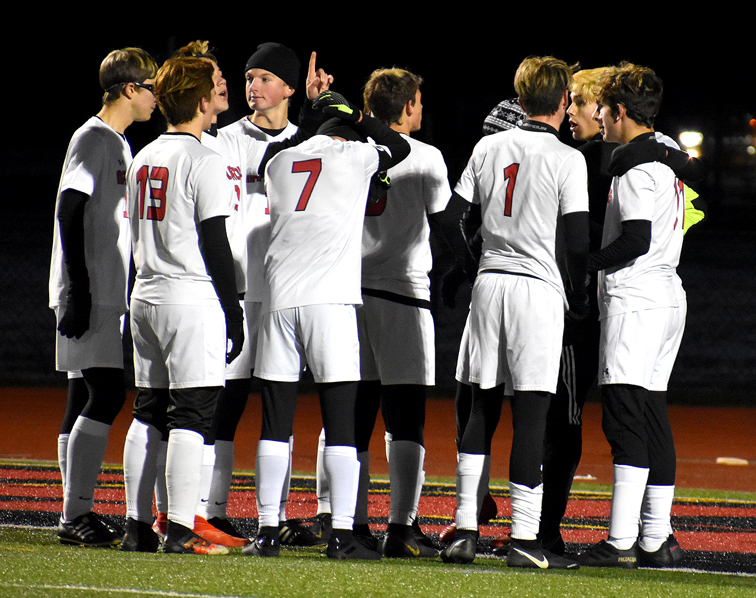 HILTON — Keshequa put on the performance of the season to upset East Rochester in the Section V Class C boys soccer title game earlier this week, and judging by Friday night’s Far West Regional contest against Section VI champion Maple Grove, the Indians are not slowing down.

Facing a Red Dragons defense that allowed just eight goals all season, Keshequa fired home two goals in the span of a minute midway through the first half and would go on to claim a 4-1 win at LaBeau Field to remain unbeaten and advance to the New York State Athletic Association Final Four in Middletown.

“They are great kids to be around, it’s just an awesome experience,” Keshequa head coach Ron Macomber Jr. said. “(Our defense) has been playing great. They have played probably the best at the end of the season. This is the first time we’ve been scored on since the first round of sectionals, maybe the first goal we’ve given up in sectionals. They are playing great as a unit.”

During the first stretch of play until the Indians were able to get on the board, fans were treated to an exciting stretch of back-and-forth offensive action.

Maple Grove goalkeeper Sam Cummings was forced to pick off an early corner kick that was headed toward his net, and that ball was quickly fed up to Caleb Foley for an early chance at the other end that was snuffed out before a shot could be made. After Cesar Batile struck a long bouncing try on net, Maple Grove responded again in the sixth minute with Foley walking a ball in for a shot that fell wide left. 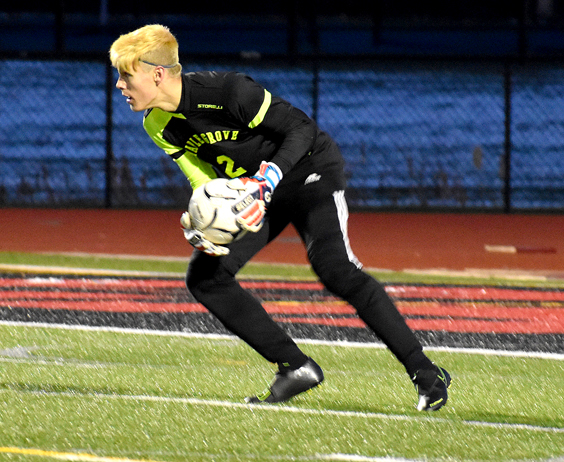 Following suit with some good offense for the Red Dragons were Adam Marsh with a head ball off a corner kick, and Nick Golando with a free kick from 25 yards out that was blocked down by the Keshequa defensive wall.

“They were very good with shifting,” Foley said. “I had speed but they were good … if one person got beat another person was right there. They were really good at reading either where I was going or the ball was going.”

In perhaps Maple Grove’s best chance of the day, Tristan Spillane found himself in a foot race for a loose ball with goalkeeper Brendan White. Coming out to cut off that chance, White would get a piece of the ball before Spillane could take a swing, with the Keshequa defense collapsing for a clear away from any white shirts.

Responding to that chance, Batile struck a volley off the crossbar in another quick change of momentum.

With the clock reading 18:07, Reese Powers opened up the floodgates for the Section V champs as there was some defensive confusion in the Maple Grove 6-yard box following a corner kick. Powers would waste no time, poking a quick finish by Cummings for his sixth of the season.

Still reeling from that goal, Maple Grove would suffer another at 17:38 when Riley Rease beat his man down the right side of the field. With Cummings rushing out to cut off that shot, Avery Strobel was left wide open on the back side for a tap-in finish to make it 2-0.

“They are playing absolutely fantastic,” Maple Grove head coach Cara Abbey said. “They play a beautiful brand of soccer. Quick passing, quick movement, they step hard to the ball. At the end of the game we wished them all the best of luck because they are a fantastic team.”

Maple Grove would do its best to respond before halftime, with Eli Moore ripping a well-placed shot inside the right post that was grabbed by White, but Keshequa would carry their two-goal margin into the second half.

The Indians would extend that lead by another in the seventh minute, when Reese was able to beat his man with speed down the left line for a low finish past an encroaching Cummings.

Goals in bunches were the order of the night, as Keshequa followed that up with another three minutes later when Jordon Luther found some space on the right side and sent a low cross through the 6-yard box that was banged home by Powers to make it 4-0.

It is a testament to the career and the season of Foley that the Maple Grove senior would not go down without a fight, even facing a four-goal deficit.

After being stymied all night, Foley would leave it all on the field with four minutes left, cutting outside and bending and inside-out shot past White from a tough angle for his 23rd of the year.

“I also think it helps the younger kids, because for them this is all new. I think goals like that, even though it may not have an impact on a win, I think it shows them that you can’t give up until the final whistle,” Foley said. “I could not have asked for a better team for my senior season. We got to get that revenge on Randolph and get that blue patch.”