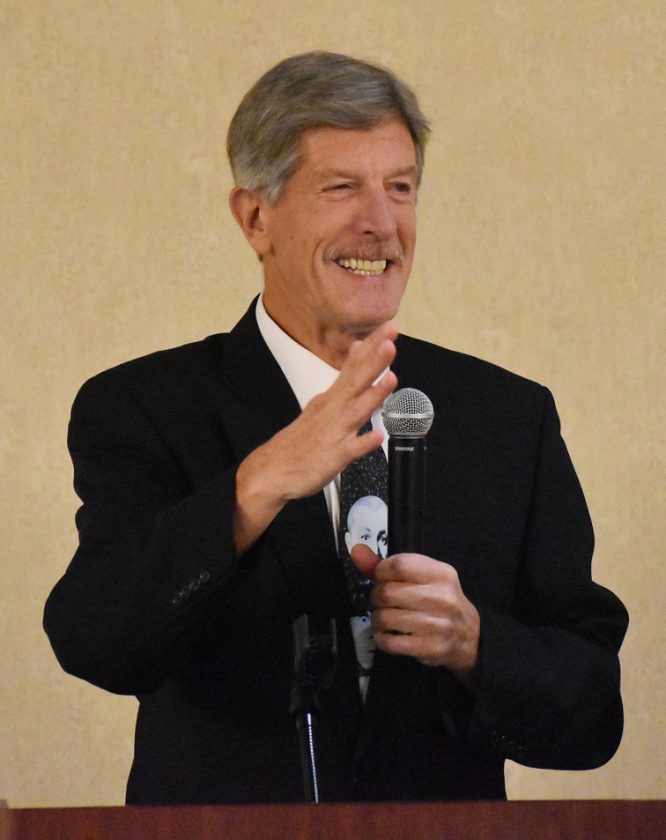 Tom Tellmann stepped to the podium at the DoubleTree by Hilton in downtown Jamestown earlier this week sporting a tie that displayed the images of the “Three Stooges.”

And for the ensuing 45 minutes, the Warren, Pennsylvania resident offered one-liners and stories that would have made Larry, Curly and Moe proud, because the chat he had with supporters of Jamestown Community Baseball Inc. during a noon lunch was equal parts humorous and equal parts inspiring.

In other words, the 65-year-old former major league pitcher with San Diego, Milwaukee and Oakland figuratively hit it out of the park.

Tellmann was born in Warren in 1954 and, like so many lovers of America’s pastime, dreamed of one day playing in the big leagues.

There was one problem, though. He couldn’t even make his high school team.

Finally, as a senior, the right-hander was finally deemed good enough.

“My very first game I threw a one-hitter against Jamestown,” he said with a smile.

While a star may not have been born that day, it could be suggested in retrospect that a pretty good one was on the way.

From his one-year high school career, Tellmann pitched collegiately at the University of Nevada-Las Vegas and Grand Canyon University before being selected in the 11th round — 245th overall — by the Padres in the 1976 draft.

“It’s like going from Warren to Pittsburgh by way of Toronto,” Tellmann joked.

In five major league seasons, Tellmann posted an 18-7 record with a 3.05 earned run average in 112 appearances. Along the way, he was teammates with Hall-of-Famers Rollie Fingers, Gaylord Perry, Ozzie Smith, Don Sutton, Paul Molitor and Robin Yount; struck out Hall-of-Famer Rod Carew on a Monday Night Baseball television appearance in 1983; pitched to Hall-of-Famer Carl Yastrzemski at Fenway Park; and, try as he might, struggled to retire Wade Boggs or Cal Ripken Jr., another pair enshrined in Cooperstown.

After leaving the game following the 1985 season, Tellmann ultimately returned to his hometown where he coached his high school alma mater. Every so often, he pulled out the grainy video of him fanning Carew to let them know that, “This can happen if you apply yourself. That was the teaching tool that was handy at the time.”

Tellmann knows a thing or two about teaching the game.

In fact, for four years he had five classes of 20 youngsters per class in Warren. They came from a 60- to 80-mile radius. Tellmann also conducted classes at Gold Star Athletics in Falconer for more than 15 years where more than 40 of his students ended up playing collegiate baseball.

“The goal is, hopefully, one of the kids I taught can get (to the big leagues) and experience the same thing I did,” Tellmann said. “It’s worth all the work.”

Tellmann described the first time he played in Yankee Stadium as a “religious experience.”

During batting practice, videos of Babe Ruth, Lou Gehrig, Whitey Ford and Thurman Munson were played on the scoreboard, giving Tellmann a history lesson of the iconic franchise.

“You’re steeped in Yankee tradition through the beginning of the game,” he said. “On my first appearance, I just remember walking on the mound … and looking down at my feet and knowing Walter Johnson and Babe Ruth stood on that very spot.”

Tellmann paused to compose himself. Asked later why that memory evoked such emotion, his answer came in the form of six words: “I never thought I’d get there.”

But the young man who didn’t make his high school team until his senior year, proved his doubters wrong.

“The only thing I ever wanted to do in life was to play baseball,” Tellmann said. ” … I pitched one year in high school and I basically thought it was over.”

In reality, his career was just getting started.