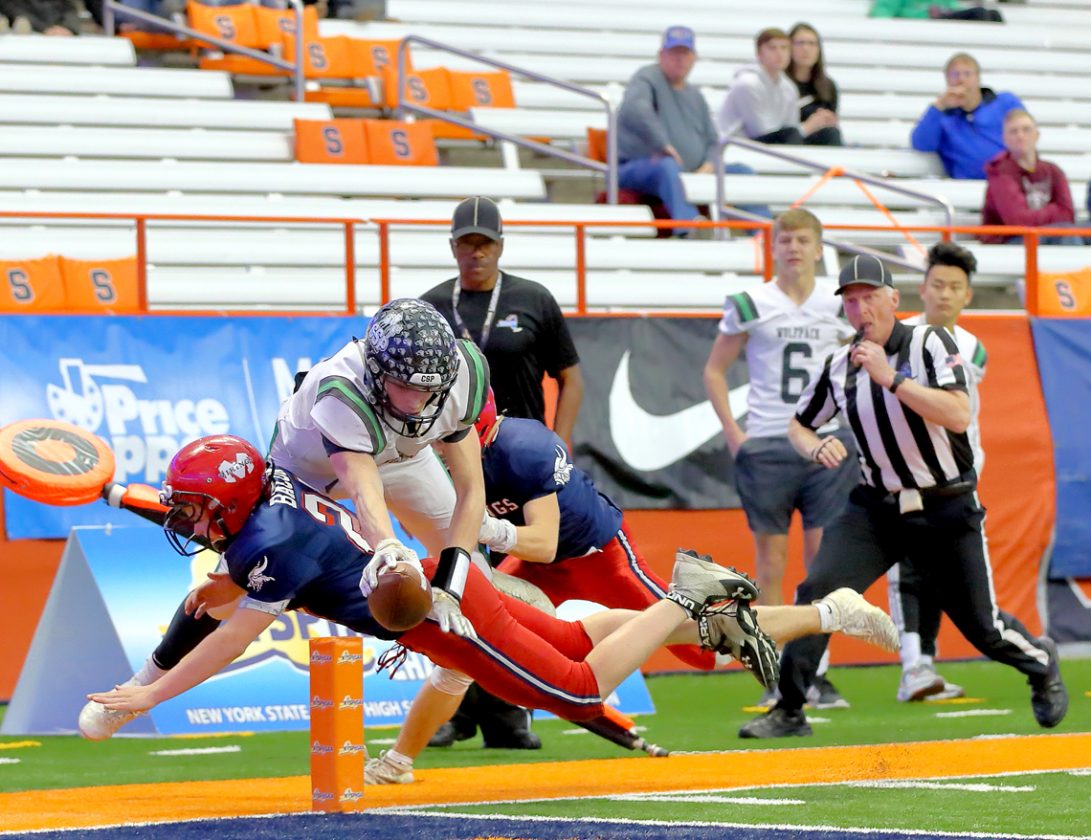 Clymer/Sherman/Panama’s Cameron Barmore (2) reaches for the end zone before being ruled out at the 1-yard line during the NYSPHSAA Class D championship game against Moriah on Friday afternoon at the Carrier Dome in Syracuse. P-J photo by Tim Frank

SYRACUSE — Clymer/Sherman/Panama ended the football season where it started.

Unlike a year ago when Clymer/Sherman/Panama didn’t pull away from the Vikings until the fourth quarter, this one was never in doubt.

“We all just do our piece of the puzzle and never take our foot off the gas,” said junior John Swabik, the game’s Most Valuable Player. “As long as we do that, we’re good.” 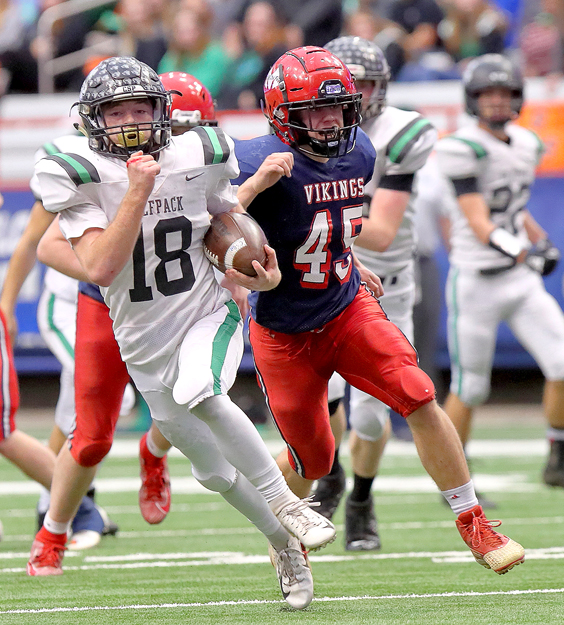 The Wolfpack’s Brendon Ramsey runs for a gain. P-J photo by Tim Frank

The day after Thanksgiving, the Wolfpack (11-1) were very, very good.

In fact, after punting on its first offensive possession, Clymer/Sherman/Panama scored the next seven times it had the ball, with six of those drive starts beginning around midfield. It was a recipe for success for Coach Ty Harper’s program, which improved to 24-1 over the last two years and 30-4 since the start of the 2017 campaign.

“I can’t say enough about this senior group,” Harper said. “They’ve really taken our program from a place of battling for respect and trying to become one of the elite teams in the area to this — back-to-back state champs. It’s something that kids dream about, it’s something that the coaches dream about and a lot never have an opportunity to achieve.”

Take a bow, Hinsdale, fellow seniors Cameron Barmore and Zavon Overton, and Swabik. All four played key roles in last year’s run to the state title, and they did so again in 2019, a season that could have been derailed after being dominated by Franklinville/Ellicottville in a Week Three loss. Instead, the Wolfpack ran off nine straight wins, including an epic, 28-27 come-from-behind win over Section IV Tioga in the Western semifinal last week.

“It really hasn’t sunk in yet,” Hinsdale said. “I’m excited I’m going to be able to celebrate on the bus ride home with my teammates. I’m just going to live on the high right now.” 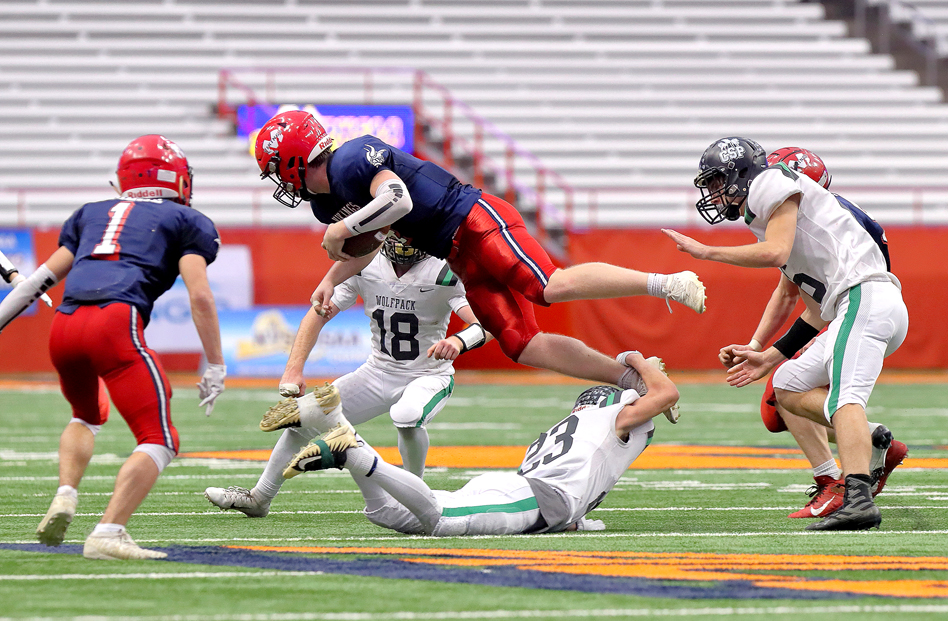 Fittingly, Clymer/Sherman/Panama got on the scoreboard first when Hinsdale connected with favorite-target Barmore on a wide-open 37-yard touchdown pass courtesy of a perfectly executed post-corner route with 2:30 remaining in the first quarter.

The Wolfpack were just getting started.

The rest of the first half they found the end zone on runs of 26 and 2 yards by Brendon Ramsey and Cooper, respectively; and Hinsdale’s 3-yard pass to Overton. Armed with a 27-0 lead at intermission, Clymer/Sherman/Panama was in complete control.

After the break, it was much of the same.

Third-quarter touchdowns — on Cooper’s 11-yard run and Hinsdale’s 1-yard dive — ballooned the advantage to 41-0, allowing Harper to substitute liberally, including getting senior Sally Watson on the field and moving Hinsdale to free safety. Heck, Hinsdale even returned a punt to complete his championship game position trifecta. 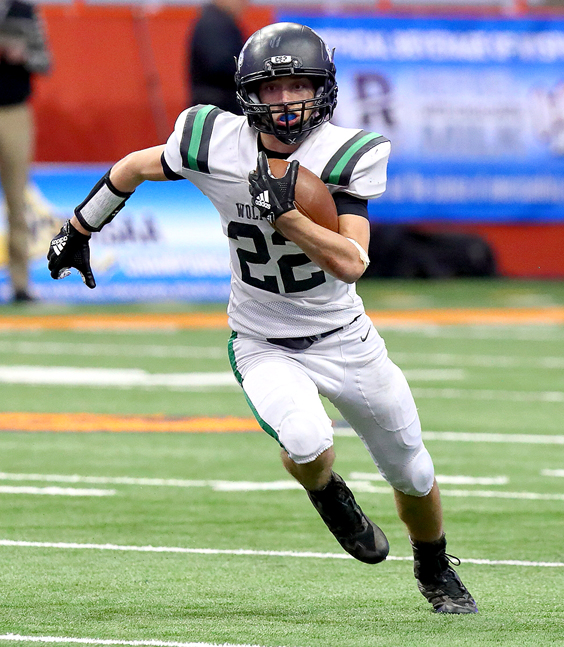 In the final period, Moriah finally ended the shutout when Todd Malbon tossed a 53-yard touchdown pass to Matt Diehl with 11:47 remaining, but the outcome had long since been decided. Ironically, the Vikings have dominated Section VII in the last 25 years, winning 13 sectional crowns during that span, but they have lost all four times they have reached the state title game, including a 55-7 setback to Maple Grove in 2008, a 41-0 loss to Randolph in 2009 and the 26-6 loss to Clymer/Sherman/Panama in 2018.

“We’ve just continued to improve and learn from our mistakes,” Harper said. “I’m trying to get better every day. If I’m not a better coach next year than I was this year, then that’s not good. I just want to keep getting better at this and having a positive influence on young guys and young girls and, hopefully, this program continues to grow.”

“Having so many great coaches in the area, it’s really easy to be positively influenced to go in the right direction,” Harper said.

The fifth-year Clymer/Sherman/Panama coach has been doing just that, especially the last two seasons, which ended both times with the state’s ultimate prize.

“It was tough in Harper’s first two years,” Hinsdale said, “but he stuck with it … he persevered. To get to this point is pretty incredible.”

NOTES: The Wolfpack’s Bishop Kopta closed out the scoring with an 18-yard keeper at the 8:21 mark of the fourth quarter. … Clymer/Sherman/Panama held a 365-168 advantage in total offense to go along with 20 first downs compared to only eight for Moriah. … Hinsdale finished 9 of 12 passing for 119 yards and the two touchdowns. … Derek Sears led the Wolfpack with 64 yards rushing, Cooper had 55, Swabik had 39 and Ramsey chipped in 36. … Maddox Blaise, Section VII single-season record holder, gained 102 yards on 24 carries. … Overton finished with four receptions for 60 yards, while Barmore had three catches for 57. … Defensively, Swabik led the way with 11 tackles and one assist, and intercepted a pass; Barmore had six tackles; and Zach Chase had five tackles and one unassisted stop. … Jarvis Bivins also had a pick for Clymer/Sherman/Panama. … Receiving postgame awards for the Wolfpack were Swabik (Most Valuable Player); Ramsey (Most Valuable Defensive Back); Alex Dunnewold (Most Valuable Offensive Lineman) and Hinsdale (Sportsmanship). … Mark Maye was Moriah’s Most Valuable Defensive Lineman recipient. … Jordan Svetz booted three successful point-after kicks. … Hinsdale connected with Matthew White on a 2-point conversion pass.