ROCHESTER — Oakfield/Alabama/Elba exploded out to a 42-point halftime at Saturday night’s eight-man football championship at Growney Stadium on the campus of St. John Fisher College, and would hold off a late push from Maple Grove on the way to a 60-34 victory to retain its title.

The two-headed rushing attack of Colton Dillon and Ty Mott would once again proved too much for the Red Dragons to handle after the Aggies posted a 60-12 win over Maple Grove to open their season.

Leading the defending champions under center, Dillon would run nine times for 288 yards and five scores while Mott picked up 190 yards and three touchdowns on his nine carries.

Despite ending their first eight-man season with a loss for a 5-3 record, in many ways Saturday night’s game stands as a testament to the perseverance of Maple Grove’s program this year. Returning to the field in a 48-6 hole after halftime, the Red Dragons played like it was a one-score game the rest of the way. 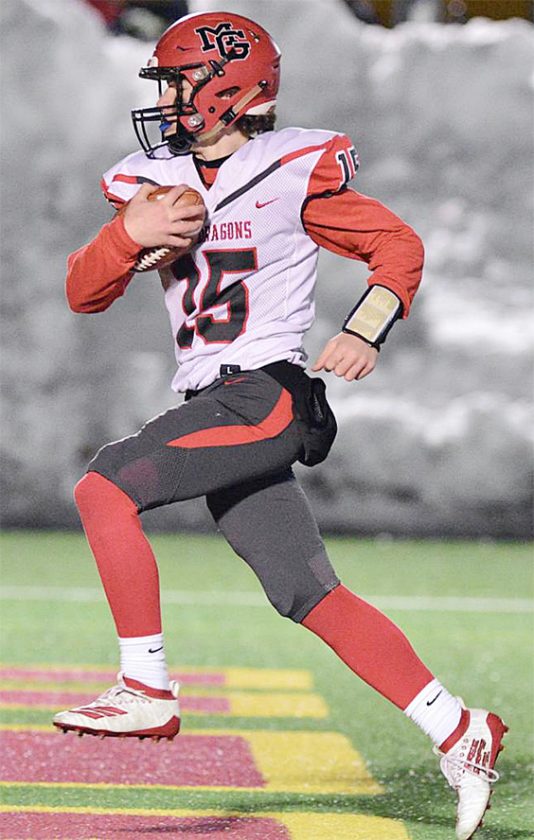 Leading that charge was senior Ayden Reagle, who began his night with a stellar catch over his defender for a 16-yard touchdown from quarterback Jackson Gowan in the opening quarter.

“We just stuck with it,” said Reagle. “Our coaches all year told us that we are fighting adversity every game because before the season we didn’t even know we were going to be playing this (eight-man football). A couple days before we were told and we just had to stick with it and do our best every game to make things happen. It’s learning a whole new sport. We had to make all new formations and learn all these new plays, new positions and new rules and just try and squeeze all that in in the time we had before our first game.”

For more evidence of the team’s character, look no further than Carter Martin’s effort midway through the opening quarter. With the Red Dragons opting to go for it on fourth-and-3 at the Aggies 23-yard line, Martin was stopped on a pitch to left side. Frustrated by that missed chance, the Red Dragons came out firing on defense as Jake Tomlinson came up with a tackle for a loss. On the following play, Dillon would drop back and fire a ball over the middle of the field, with Martin leaping up for a interception that led to Reagle’s opening score of the night.

“We had some adversity in this season and we faced it. Today was a good example in that game,” said Red Dragons coach Justin Hanft. “We had our seniors in there and the number one thing they were saying at halftime was ‘Hey, there is no give up in this team, just keep fighting.’ Obviously, the first half didn’t go the way that we wanted it to, but I was just really happy in the second half that we didn’t go down without a fight. We kept plugging along and ended up doing pretty well offensively in the second half.”

The seniors also let their actions do plenty of talking in that second half, as Reagle opened up the third quarter with a 78-yard kickoff return. He would return two punts for 77 yards and four kickoffs for 131 yards while also intercepting a pass.

“As soon as I grabbed the ball there was just a gaping hole to the left and I just took off. Just daylight,” Reagle said of his touchdown.

Gowan would join the party late in the game, scoring on runs from 3 and 13 yards while also finding Cade Egan on a scoring throw.

As they have done all season, Tomlinson and Kyle Trim would work tirelessly on defense for the Red Dragons, finishing with eight and seven tackles respectively.

This year may have brought plenty of unexpected surprises to Maple Grove’s football program, but in the end things turned out more than OK.

“I think at the end of the day we are pretty happy with the product,” said Hanft. “It is unfortunate, the state of where football is at with a lot of these small schools and just not having the enrollment numbers that they used to five or six years ago. That is where we’re at and we’re taking it one day at a time. I can’t say enough about the season, about our seniors, sticking together and really fighting it out and making sure Maple Grove still had football in 2019.”

NOTES: Cade Egan and the Aggies’ Peyton Yasses were the individual sportsmanship award winners. … Trim was named the lineman of the game while Dillon was the offensive MVP and Mott the game MVP.