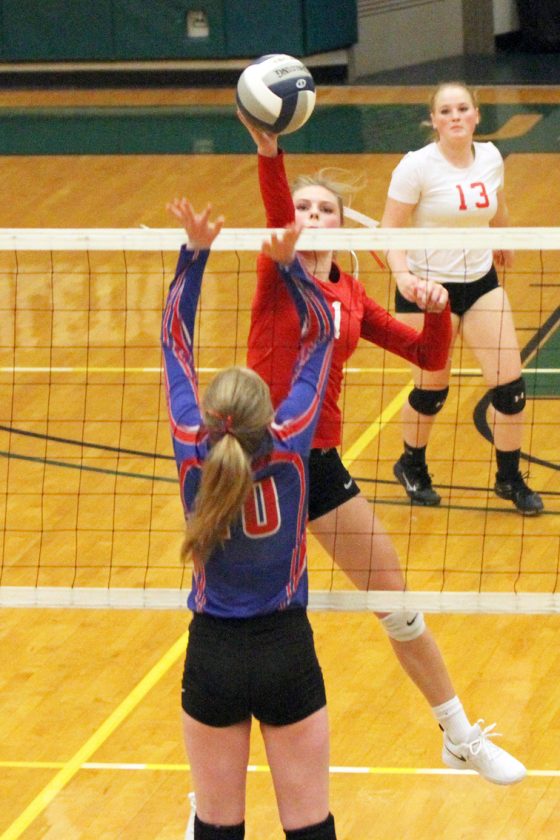 No. 1 Randolph suffered a minor misstep in the second set of Thursday night’s Section VI Class D1 volleyball final against No. 2 Cassadaga Valley, but the Cardinals responded without incident on their way to a 25-9, 17-25, 25-16, 25-22 win.

The Cougars went on a 12-point run behind the serving of Jocelyn Faulkner to break out to a big lead in the second frame, but could not keep their offense in that same groove the rest of the way.

Randolph now prepares to meet D2 champion Panama at 7 p.m. back inside the Physical Education Complex on Tuesday.

“When that happens I just want it to be over,” Randolph coach Robin Maycock said of the second set. “The only thing I just kept saying to my assistant coach is ‘I want this game to be over so we can restart.’ That happens in volleyball, I don’t know how to describe it. You just regroup and move on.”

Considering their dominant play in the first set, the Cardinals may have stepped off the gas a bit too early. The opening set of the night got out to a 6-6 tie as Jill Stahley led Randolph out of the gate with some big overhands while Brielle LeBaron grabbed a block and Heidi Williams a kill for the Cougars. 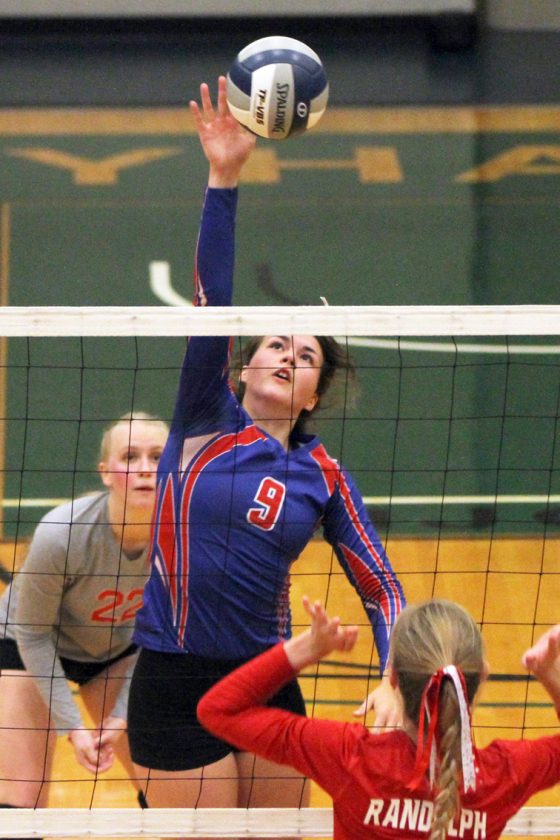 The tight start would come to an end quickly as the Cardinals went on a six-point tear behind more hard-hit balls by Stahley, a slick defensive save by Brynn Pagett and a cross-court spike by Sydney Hvizdzak.

Service aces from Eve Adams and Alyssa Adams down the stretch as well as more spikes by Pagett and Rian Finch would seal up the early victory for the top seed.

Randolph would continue to benefit from the strong play of senior captain Stahley as well as Hvizdzak, who found a home for her cross-court overhand early.

“In Game 1 she was playing out of this world, I thought with her serving, hitting, passing,” Maycock said of Hvizdzak. “Her defense in those last couple of games, I’d see the ball hitting the ground and she came flying out of nowhere. She worked really hard, I thought they all worked really hard. Jill was consistent with her passing, serving and blocking, which we needed.”

Both teams would trade points back and forth once again in the second set for a 3-3 start when Randolph fell victim to a streak of bad hitting.

While Faulkner found her rhythm at the service line, the Cardinals suffered a string of mishits during a five-point swing, forcing a timeout from Maycock.

That break was not able to swing the momentum, as Randolph fired a spike wide, struggled with its passing, and fired another overhand into the net before Stahley could break the Cassadaga Valley rush with a point.

“That’s absolutely the way that we can play,” Cougars head coach Denny Wakelee said. “The heads are up, the serves are in, the hits are in. That is what I hoped to see more of tonight but we just got it in small pieces.”

Randolph would rally down the stretch, but in the end Cassadaga Valley was able to seal up that second set with a block by Meghan LeBaron and an overhand finish from Brielle LeBaron.

The Cardinals would pick up a big play midway through the third when Hvizdzak came up with a diving save that was finished off by Mya Abrams. Later Stahley would pick up a pair of tip winners while a block from the Cougars just missed the sideline.

Grace Warsitz would rally Cassadaga Valley with a defensive save late in the game, but Hvizdzak was able to finish things off with another cross-court swing.

After taking advantage of a few mishit balls early, Randolph picked up another confident lead in the final frame as Stahley converted points on a putback, another tip, and a serve that hit the net and trickled over.

“We put a few different girls in, I was happy they could stick with it if (Cassadaga Valley) got a couple points, just don’t go all the way down again,” Maycock said of the final set.

Randolph knows that it will now have its hands full with the challenge of handing Panama its first loss of the season.

“My anticipation is Panama,” Maycock said. “We’re going to have to figure out a way to keep the ball away from their middles if we get a chance to play them.”