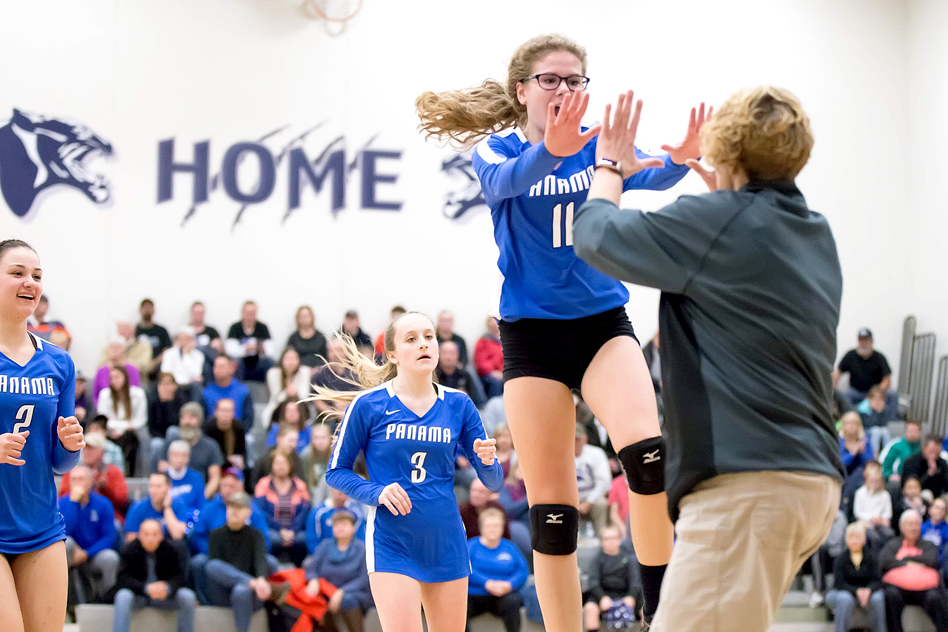 The rest of the Panama Panthers came round late to finish off a dominant victory.

Angeletti ran off a string of 11 straight service points that included four kills and two blocks from Schnars to open the match as No. 2 Panama swept No. 3 Pine Valley 25-5, 25-16, 25-4 in Section VI Class D2 semifinal action Tuesday evening.

“The girls were so excited for this game, just the playoff atmosphere,” Panama head coach Tammy Hosier said. “It’s playoff season, you have to play with that high energy level all the time.”

The win sends Panama into an 8 p.m. matchup Thursday against No. 1 North Collins where the Panthers will seek their fourth straight sectional championship. 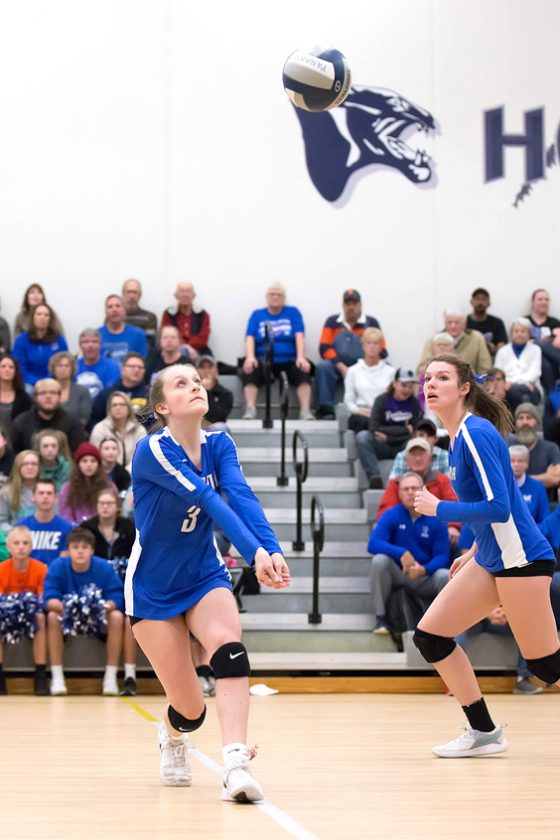 The Panthers’ Maddie Johnson passes to a teammate.

For Pine Valley, its season comes to an end with five victories, just two years removed from a winless season in South Dayton.

“I came in last year and we only won four games, but this year we won a few more. We’ve been improving,” Pine Valley head coach Kaitlyn Hoth said. “Seeing Panama, I know we can do great things, it’s just about being consistent every game. I’m really excited for next year to see what we can do.”

“That’s a great combo with Nat serving in the back row and Kylie in the front row,” Hosier said. “That was pretty dominant.”

Panama had the upper hand from the start Tuesday, stretching its 12-0 lead to 16-1 on two more kills by Schnars and three Marra Hovey service points. 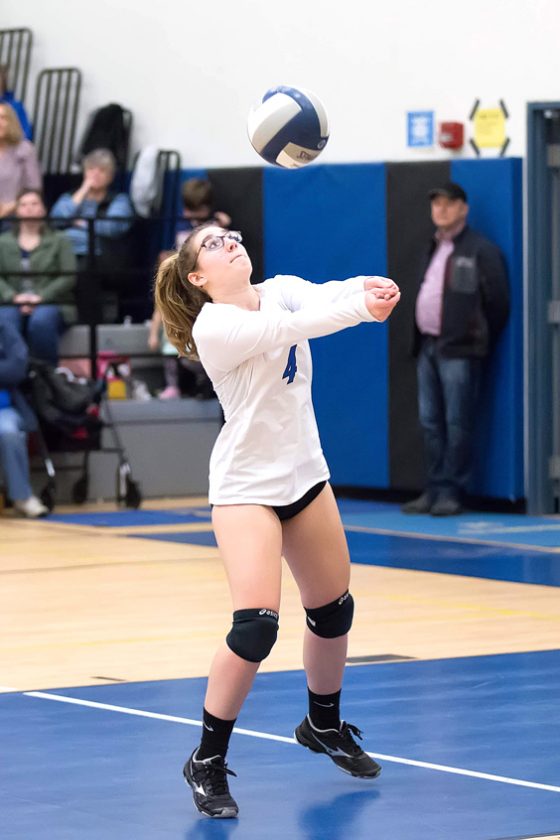 Pine Valley eventually closed the gap to 20-5, but a clever tap from Angeletti gave service back to Panama and Alexis Finnerty served out the game, capped by an Ashlyn Harvey kill and another strategic set over the net by Angeletti that fell in behind Pine Valley’s last line of defense.

“Ashlyn and Alexis have been doing a great job. They are both getting a lot stronger,” Hosier said. “Everybody has their roles. Accepting their roles and being a team player is what it’s all about.”

Despite the relatively noncompetitive first game, Pine Valley came out hungry in the second game taking 1-0 and 2-1 leads while being tied as late as 3-3. Eventually a kill and an ace from Angeletti made it 9-5 in favor of Panama.

“Volleyball is such a game of momentum. Obviously they wanted to win, and they were celebrating every single point very loudly. That’s contagious,” Hosier said. “We let up a little bit. Going out almost too hyped up can be a bad thing.”

With Sadie Fadale on the service line, Pine Valley scored three straight points to close within a point at 12-11, but Schnars ended that run with an emphatic kill to keep Panama in the lead.

Panama remained ahead by five or six points for most of the remainder of the game before scoring the final three points capped by an Angeletti ace to win 25-16.

“We played really hard, doing things that we’ve never done,” Hoth said about her team’s second-set performance. ” … There were just some points in there that weren’t so good and we weren’t able to come back from them. Overall, I was really happy with the second set.”

The start of the third game was similar to the start of the match as Angeletti ran off a string of five straight points, including a pair of aces, to give Panama a 5-0 lead.

With Maddie Johnson at the service line, Panama’s lead grew from 8-2 to 19-2 with three kills from Schnars and a pair from Alexis Finnerty.

“She’s improved so much. She works really hard. She is so conscientious about working with the hitters to figure out what they want,” Hosier said of Johnson. “One of the biggest improvements with her has been her defense. Last year she struggled with that. … She’s really stepped up there, and her set placement is so much better.”

Ally Finnerty eventually served out the match with the final three points, winning when Pine Valley put its final return into the net.

“Every team is different. We talk a lot about why we got there in the other years, and maybe some of the things we can improve upon. We take the positive things and let the negative things go,” Hosier said. “This team is really its own team. We have a couple of players who stand out, but without the other players they wouldn’t stand out.”