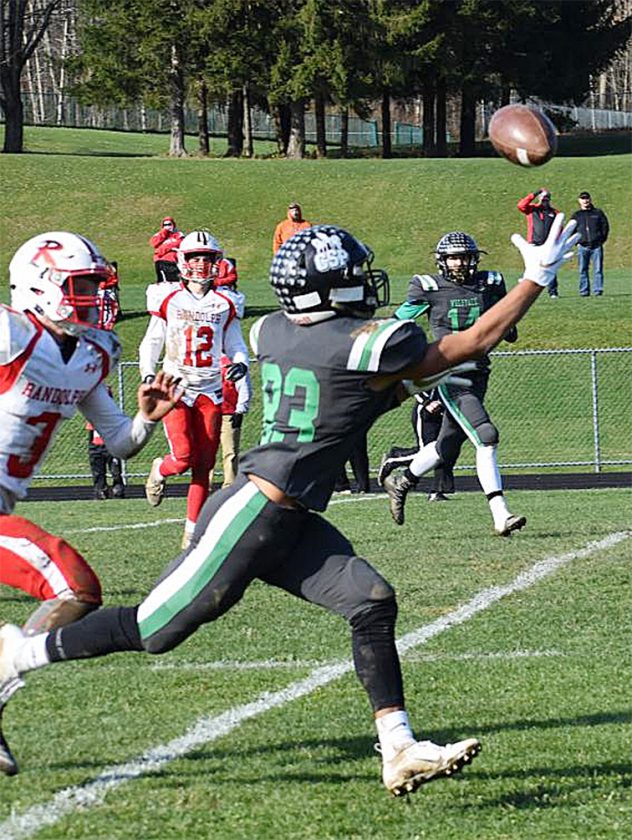 PANAMA — Zavon Overton stood near his own 35-yard line at Jack Keeney Field, waiting to return a punt. It was late in the first half of Saturday’s Section VI Class D semifinal football game, and No. 2 seed and defending state champion Clymer/Sherman/Panama was in need of a spark.

And then the Cardinals weren’t.

Getting a running start, Overton caught the punt in the air and 65 yards later he was in the end zone for a touchdown. The return to paydirt was exactly what Clymer/Sherman/Panama coach Ty Harper needed, and he wasn’t bashful about letting Overton know how he felt.

“It’s the best offense we’ve had in about an hour,” Harper exclaimed on the Wolfpack sideline. “Thank you 83!” 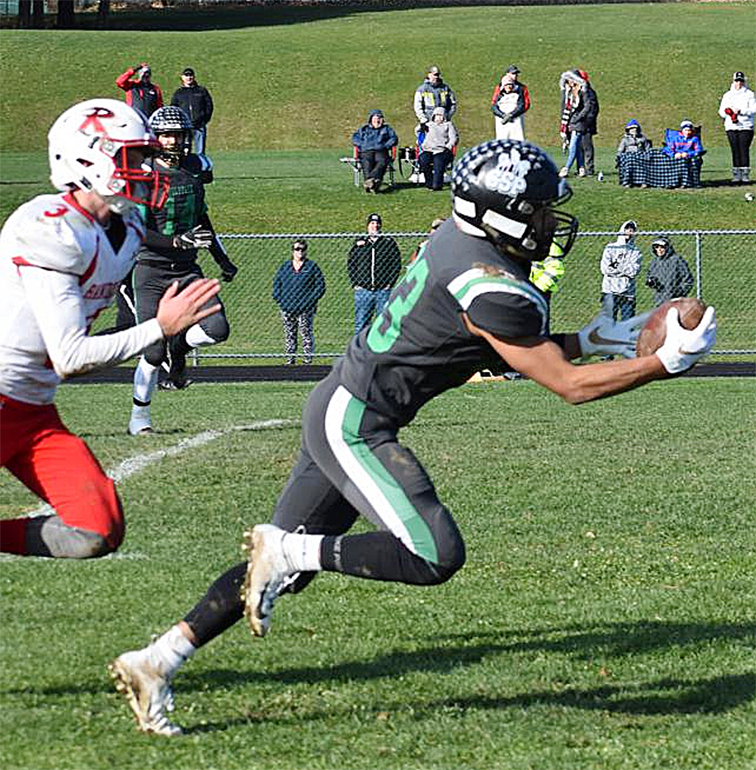 It was that kind of afternoon for the senior wide receiver/defensive back.

Overton caught two touchdown passes from quarterback Gerrit Hinsdale; returned the aforementioned punt for another TD; and intercepted a pass to set up yet another score, as the Wolfpack rolled to a 42-12 victory.

The win means Clymer/Sherman/Panama (7-1) will return to New Era Field at noon next Saturday against top-seeded and unbeaten Franklinville/Ellicottville (8-0) with the sectional title on the line.

“To go two years in a row, it’s a good feeling,” Harper said, “but ultimately it’s not just good enough to be there. We want to win the game. 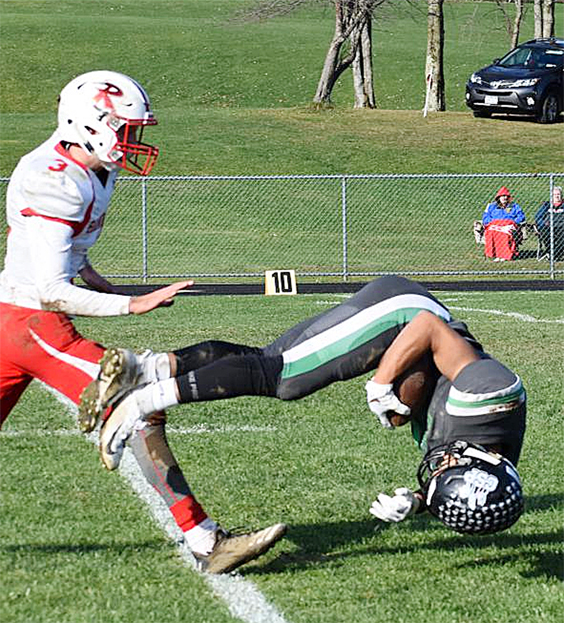 “(Franklinville/Ellicottville) is a great team. They’re extremely talented. They have some really good pieces on offense. They have very talented backs and the quarterback is a terrific athlete. I think more than anything they were more physical at the point of attack that first game.”

After a close start to their semifinal against Randolph, the Wolfpack scored 35 straight points to win going away, with a huge assist from Overton, a three-year starter on defense. Ironically, he didn’t begin to show his offensive prowess until late last season.

Beyond his stellar play on both sides of the ball, Overton has also been an ace on special teams, averaging 40 yards per punt and being a huge threat in the return game. 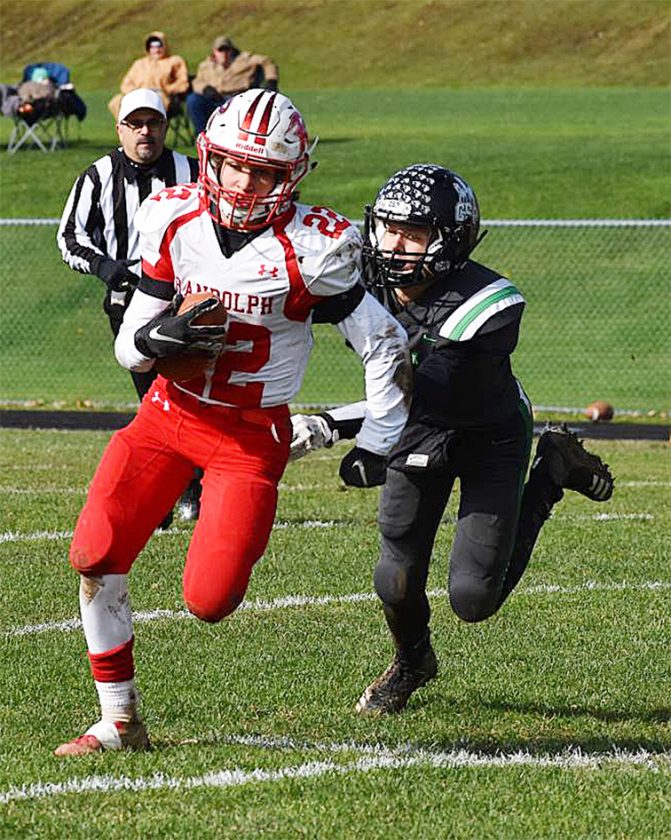 That was particularly evident during a 24-minute stretch spanning the first through the third quarters.

“I asked him what he had for breakfast today,” Harper said of Overton. “He had a great week of practice, and he was very motivated to come out and play well today.”

After Clymer/Sherman/Panama and Randolph traded first-quarter touchdowns — the Wolfpack’s Connor Cooper scored on a 6-yard run and the Cardinals’ Xander Hind swept left 27 yards to paydirt — Overton took over.

The 5-foot-11, 175-pound senior was responsible for the next three scores that included pass receptions of 50 and 3 yards from Hinsdale and the 65-yard punt return. And it was his pick late in the third quarter and his spectacular one-handed reception that set up Hinsdale’s 13-yard TD to Cameron Barmore.

Tack on Cooper’s 88-yard run to paydirt in the fourth quarter and the Wolfpack could begin making plans for another trip to the home of the Buffalo Bills.

Randolph (4-4) closed out the scoring on Josh Brown’s 1-yard run.

“This bunch did lights-out this year,” Randolph coach Brent Brown said. “We had six jayvee kids start for us, and I think four of them were freshmen, so when you get in a game like this you make some rookie mistakes.

“Bottom line is that’s what happens. (Clymer/Sherman/Panama) is a good team. They’re coached well, they have good kids. Their defending state champs for a reason.”

NOTES: Overton caught four passes for 108 yards and two TDs; Cooper rushed for 120 yards on eight carries and two scores; Hinsdale completed 10 of 14 passes for 162 yards and three touchdowns and scored on a two-point conversion plunge; and Barmore added four catches for 45 yards and a score. … John Swabik led Clymer/Sherman/Panama’s defense with 11 tackles, including one for a loss, and also booted was successful point-after tries; Bishop Kopta had nine tackles and an interception; and Barmore had seven tackles, two sacks and two tackles for loss.