Near Misses In Plattsburgh 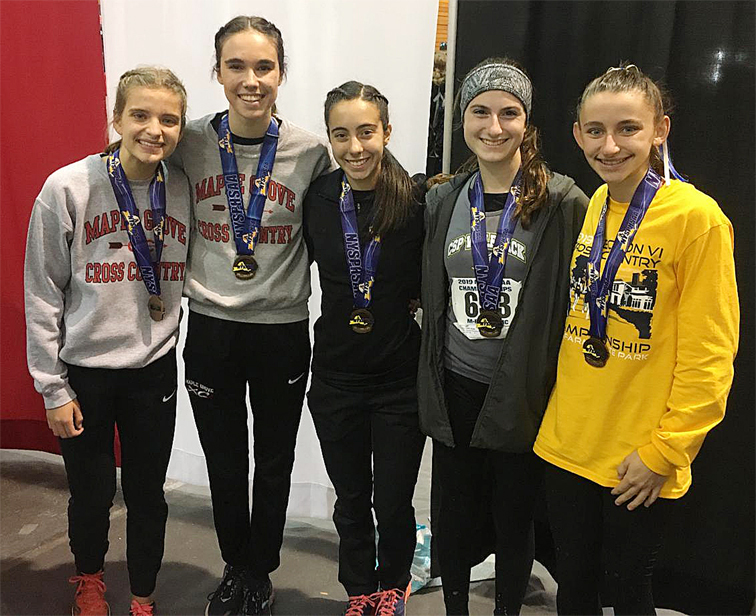 PLATTSBURGH — It was once again a day of near misses for local runners at the New York State Public High School Athletic Association cross country championships Saturday.

The Maple Grove girls, who finished second to Tully in the Class D race a year ago with 50 points, finished with 55 points this year, which was good for second place behind Delhi.

“We ran very well, but Delhi had an even better race,” Maple Grove head coach Steve Matteson said. “It would’ve been very hard to make up those five points. Hopefully we’ll have an answer for next year.”

“My top three girls all ran very, very well, At the beginning they were pretty much right together. They separated by the end, but they all ran strong,” Matteson said. “Tori and Hannah both ran season-best times, even with the conditions.”

“The top 20 in the state in each class receive medals, so that was their goal. Lukas and Riley had very strong races. Darius and Drew ran together in a pack and it was good for them,” Matteson said. “Beaver River will compete for top one or two in the state and Delhi ran very well today. We just didn’t have enough to catch them this year.”

Randolph’s Ronan McDonald took fifth in the Class D boys race with a time of 15:12.5, just over 46 seconds behind winner Kal Lewis of Shelter Island. McDonald’s Cardinals senior teammate Josh Walters was 36th in 16:37.6, Frewsburg sophomore Toby Gifford was 62nd in 17:26.9 and Maple Grove eighth-grader Alex Crist was 78th in 17:55.2.

With his result, McDonald has been invited to attend the Federation race next weekend at Bowdoin Park in Wappingers Falls.

“I’m really proud of all three of our C/S/P girls,” Wolfpack head coach Ray Shrout said. “Kylee has battled different injuries and ailments for most of the season, but ran healthy today. She was in 14th with a half-mile to go and picked off several runners over the last stretch. She has meant so much to the growth of our program.”

Fredonia/Westfield senior Emily Brown took 12th in the Class C girls race with a time of 17:49.0.

Although they didn’t count toward scoring, Southwestern senior Brady Fye was 78th (16:45.4) in the Class C boys race and Trojans junior Carter McKotch was 90th (16:51.4).