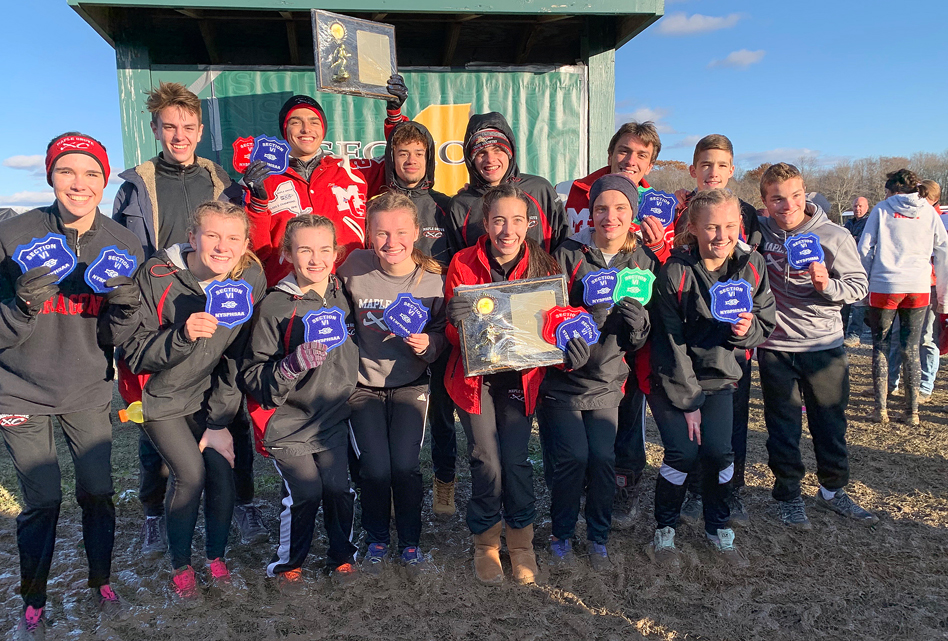 Members of the Maple Grove boys and girls cross country teams pose with their trophies and patches after winning the Class D team titles at Knox Farm in East Aurora on Friday. Submitted photo

EAST AURORA — Maple Grove’s boys and girls teams continued their dominance as did the Lady Red Dragons’ Ava Crist and Randolph’s Ronan McDonald in the Class D races at the Section VI Cross Country Championships on Friday on a cold day at Knox Farms.

Crist and McDonald led a group of 30 local boys and girls that will represent the area at the New York State Public High School Athletic Association Championships next Saturday in Plattsburgh.

Some of the berths were expected, some were not.

“As I learned from Doc Rappole, it might be a winning program, but new kids every year have to do the job,” Maple Grove head coach Steve Matteson said of advice he received from the former Red Dragons’ head man. “Even though it’s different kids, they still have the same goals and work ethic to achieve those goals.”

Carling Lockwood and Allison Bohall will round out the Lady Red Dragons’ state team.

“She has definitely made a very strong leap this year. She’s had goals from the start of the season and she is working so hard to get them,” Matteson said of Crist. “She is one of the top Class D runners in the state. Hopefully she is vying for one of those top two or three spots in the state next week.”

“There were five teams that on any given day that could take the meet. … It could’ve gone either way,” Southwestern head coach Dan Lewis said. “It was a total team effort. The guys finished where they needed to finish. They fought through a pretty difficult course.”

McDonald had the most impressive individual finish locally with his first-place showing of 17:09.73 in the Class D race. Frewsburg’s Toby Gifford took eighth (18:41.46) and Randolph’s Josh Walters took 10th (18:45.14) to also advance to states.

“Ronan has had a great season so far. He’s got his sights on the top of the state,” Matteson said. “Peter’s ultimate goal is getting into that all-state (top seven) next weekend. I’m hoping both of them have a very, very strong finish at states.”

In Class A, Jamestown’s Drew Carlson qualified for the state meet with a seventh-place finish in 17:18.31. He is the first Red Raiders to advance since Brandon Delgado in 2010.

“We knew he had a shot. There were about 10 runners within about 10 seconds of each other. We knew qualifying for states would be a bloodbath this year in Class A,” Jamestown coach Steve Sipior said. “He had a renewed purpose and found some confidence. He started surprising himself by who he was beating during the regular season. It was beautiful to watch him blossom this year.”

On the girls side, Fredonia/Westfield’s Emily Brown earned a return trip to the state meet with a second-place finish of 20:02.24 in the Class C race while Falconer/Cassadaga Valley claimed the Class C2 championship with 122 points.

Local boys team results were as follows: in Class A, Jamestown was ninth; in Class C, Southwestern was first, Falconer/Cassadaga Valley was third, Gowanda was eighth, Fredonia/Westfield was 12th and Silver Creek/Forestville was 15th; in Class D, Maple Grove was first, Randolph was third, Franklinville/Ellicottville was fourth, Clymer/Sherman/Panama was fifth, Frewsburg was sixth and Cattaraugus-Little Valley was seventh.

Local girls team results were as follows: in Class A, Jamestown was 10th; in Class C, Falconer/Cassadaga Valley was second; Silver Creek/Forestville was fourth, Fredonia/Westfield was ninth, Gowanda was 11th and Southwestern was 12th; in Class D, Maple Grove was first, Clymer/Sherman/Panama was second, Randolph was fourth, Franklinville/Ellicottville was fifth, Frewsburg was sixth and Cattaraugus-Little Valley was seventh.