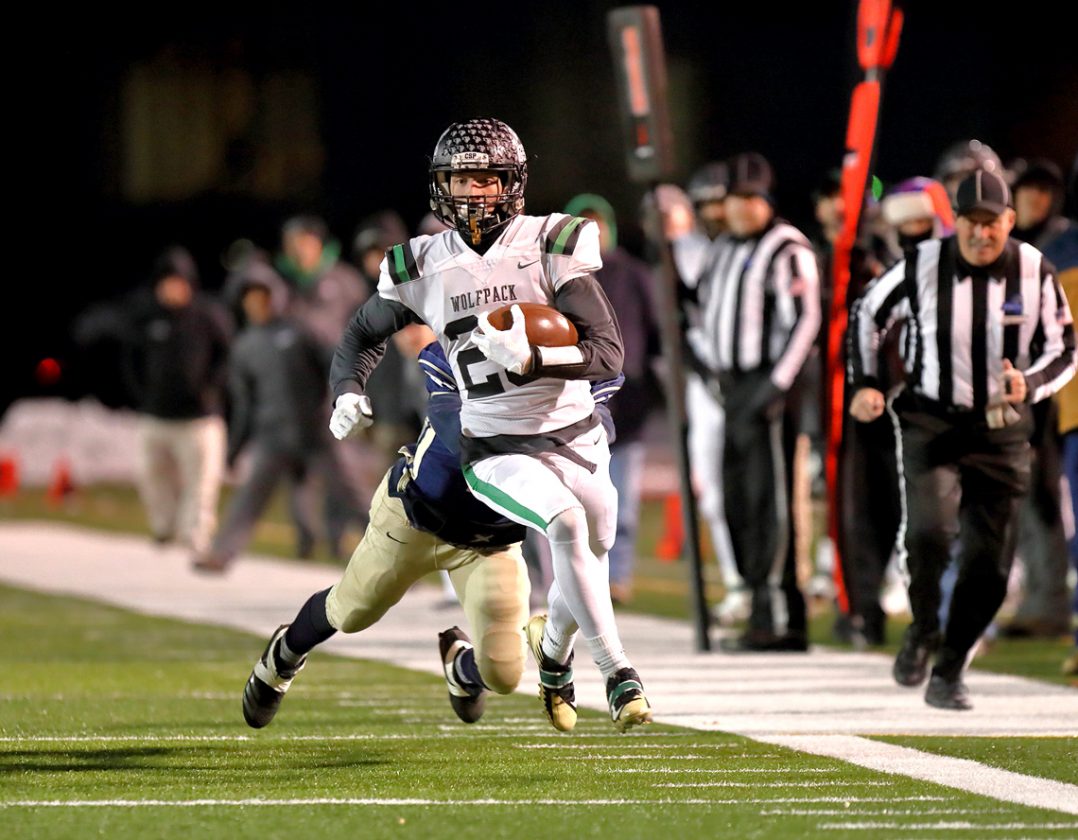 BROCKPORT — Earlier this year, John Swabik made a name for himself nationally by placing second in his age group in the decathlon at the Junior Olympic meet in Sacramento, California.

Around the Empire State, though, he truly needs no introduction anymore.

The junior from Clymer/Sherman/Panama caught four passes for 90 yards; rushed three times for 39 more; was credited with nine tackles; recorded a sack; forced a fumble; and intercepted a pass to lead the Wolfpack to a dominating, 47-14, victory over Batavia Notre Dame in the Class D Far West Regional at Eunice Kennedy Shriver Stadium on the SUNY Brockport campus Friday night.

The win vaults Clymer/Sherman/Panama (9-1), the state’s second-ranked team, into the New York State Public High School Athletic Association Western semifinals next Friday at Cicero-North Syracuse High School. The opponent will be top-ranked Tioga of Section IV, which had little trouble getting by Section III Frankfort-Schuyler, 43-20.

Should the Wolfpack play like it did in the frigid cold last night, it will be tough to deprive the merged squad from Chautauqua County a return trip to the Carrier Dome in Syracuse and a shot at defending its state title.

“Coach (Chris) Payne and I can dial up whatever we want to, but it’s up to the kids to execute,” Harper said. Offense, defense and special teams were clicking tonight.”

How good was the Wolfpack against the previously unbeaten Fighting Irish (10-1)?

“We’re very fortunate,” Harper said. “It’s a spoil of riches with so many talented players on the team.” 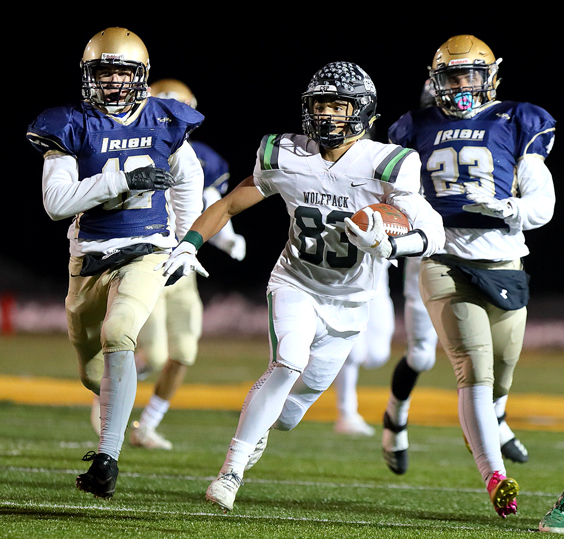 To suggest that the Wolfpack was hitting on all cylinders in the final three quarters would be a fair assessment, as it transformed a 13-8 lead minutes before halftime into a blowout prior to the game even reaching the final period. Armed with a 33-8 lead with 12 minutes to play, Clymer/Sherman/Panama could begin thinking about a rematch with Tioga (11-0), which the Wolfpack defeated, 54-19, in the 2018 semifinals.

“Tioga is a great program,” Harper said. “They’ve really set the standard over in Section IV. I’m not surprised we’re going to see them again.”

Tioga is probably not shocked that Clymer/Sherman/Panama will be the semifinal opponent either. The difficulty will be deciding which player the Tigers will attempt to contain.

Swabik, who delivered the sweet spin move and scoring strike to Barmore to highlight Clymer/Sherman/Panama’s Section VI victory over Franklinville/Ellicottville a week ago, seemed to have his hands in just about everything against Batavia Notre Dame. 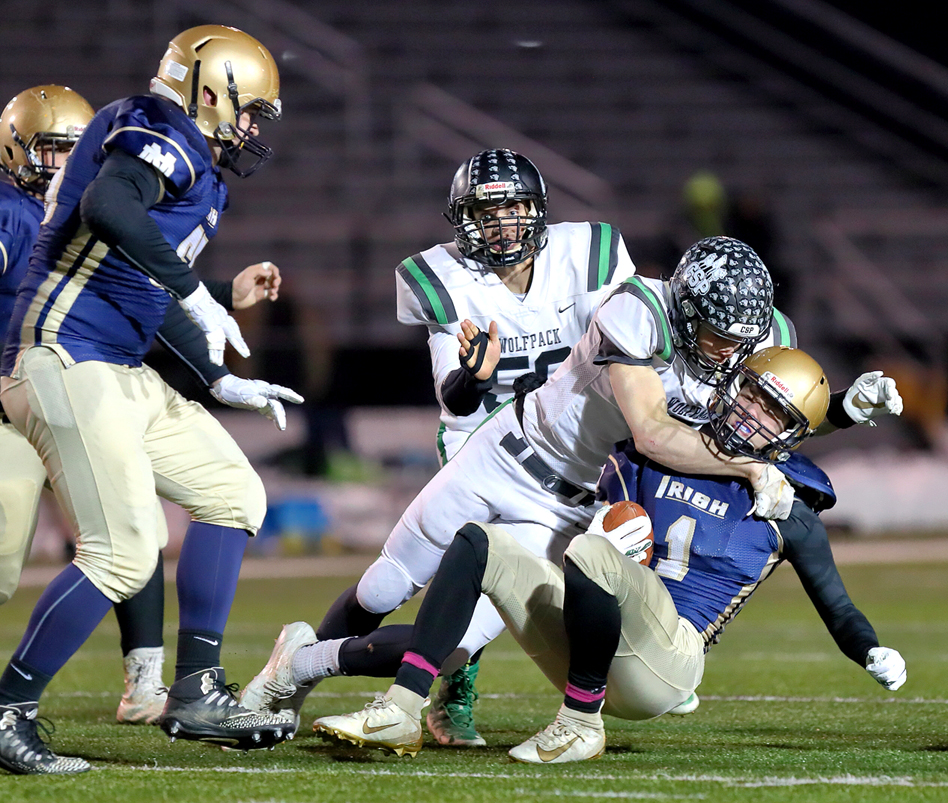 “Pressure has never really affected me,” said Swabik, who was named the game’s Most Valuable Player. “I just keep playing my game and block out everything that’s around me. Harper can count on me to be that utility man. Whatever he needs, I’m there.”

Added Hinsdale: “We just have athletes all over the place.”

NOTES: Hinsdale completed 7 of 14 passing for 108 yards and a 5-yard TD pass to Barmore. … Ramsey rushed for 81 yards, followed by Cooper with 70, Derek Sears with 47 and Swabik with 39. … As a team, the Wolfpack rushed for 262 yards. … Zach Chase led Clymer/Sherman/Panama’s defense with 12 tackles, including one for loss. … Barmore finished with 10 tackles, including four for loss; and Cooper had nine tackles, including one for loss. … The Fighting Irish’s touchdowns came via Gabe McDonald’s 10-yard run in the second quarter, and Mark Sanders Jr.’s 22-yard pass from Colin McCulley in the final period. … Jedidiah Reese rushed for 83 yards on 20 carries and McCulley passed for 240 yards. Two of those completions went to Sanders Jr., good for 78 yards. … Jordan Svetz booted five of seven point-after attempts for Clymer/Sherman/Panama. … Jarvis Bivins intercepted a pass for the Wolfpack. … The Wolfpack’s Braden Cook and Batavia Notre Dame’s Gabe McDonald were the Intense Milk/Cross Training Athletics Character Athletes of the Game for the respective teams.