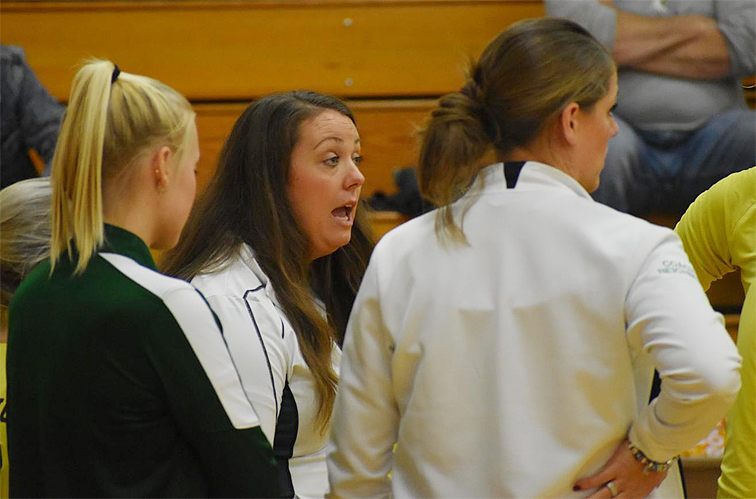 Ashley Lund walked into the lobby of the Physical Education Complex at Jamestown Community College late Monday afternoon where she was greeted by her volleyball team and a host of supporters.

Hours away from departing for the program’s third straight NJCAA Division III Volleyball Championship appearance in Rochester, Minnesota, Lund smiled at the warm reception and then was asked by George Sisson, the school’s athletic director, to address the crowd.

As she has done in all things as the head coach, Lund handled the impromptu remarks like a pro, but she admitted that public speaking wasn’t among her favorite pastimes. She’d much rather be in the gym with her team.

Given her success the last 11 years at her alma mater, her actions-speak-louder-than-words approach has been the perfect blueprint.

“What makes it special is that she coaches the heck out of them,” Sisson said. “She gets local young ladies that come here and she builds a team, and she really forces them to be fundamentally sound.”

The sixth-seeded Jayhawks (28-5) will meet No. 11 Fashion Institute of Technology of New York City (26-2) at 1 p.m. today at the Rochester Regional Sports Center. The winner will advance to the quarterfinals against No. 3 Columbus State.

Getting to that first-round match has been an adventure for the Jayhawks, but it has had nothing to do with their play on the court. The fact is they left their campus at 2 a.m. Tuesday for an anticipated 5:35 a.m. flight out of the Buffalo Niagara International Airport bound for Minneapolis.

According to Sisson, when the team arrived at the airport, it was informed that the flight had been canceled due to weather-related issues.

The next available flight, Sisson said, was 3:30 p.m. but it would go through Denver. So, by the time the Jayhawks got their connecting flight to Minneapolis, followed by a 90-minute van ride to Rochester, they arrived at their hotel at 1:30 a.m. Wednesday — 12 hours later than planned and nearly 24 hours after leaving Jamestown.

“Everybody has adversity,” Sisson said Wednesday afternoon. “How good do you want this story to be? Everybody has a story. Now our story starts with a little drama.”

In reality, the Jayhawks’ travel adventure is just one of several unanticipated events in the last three months. Before they even took the floor for their first match of the season at the Owens (Ohio) Tournament, Lund was informed that one of her players would not be joining them.

So what did Lund do?

Upon arrival at the Toledo-area school, she had the team practicing a new set in the parking lot. And although the Jayhawks lost three of four matches that weekend, she was able to school Maddy Russo on how to run the entire offense on her own. All the Jayhawks did after that was win 27 of their next 29 matches.

A month later, sophomore Jennah Starkweather’s mother passed away, followed three weeks after that by an upset loss to Genesee CC in the Western New York Athletic Conference Tournament.

At each turn, though, the Jayhawks responded in a positive way.

“That (WNYAC Tournament loss) was on a Saturday afternoon,” Sisson said, “and then the next Saturday (Lund) had to have this team not only physically ready, but she had to have them mentally ready to walk out on the court and have that swager, saying we’re the best team in the region. They were good.”

And now that the team is finally in Rochester, Lund likes her team’s chances to make some noise.

“I think we have the best bracket to have a chance,” she said. “If we can take care of what we do best, then we’re fine really against anybody.”

The Jayhawks are led by Jenna Caskey, who was named the Region 3 Player of the Year, All-Region First Team, Region 3 Tournament MVP and All-WNYAC. Her 373 kills are seventh-best in the nation and her 375 digs are second on the team. Joining Caskey in the frontcourt is Karleigh Haines. An All-Region First Team, Region 3 All-Tournament Team and All-WNYAC member, Haines is second on the squad with 347 kills to go along with 50 blocks.

But the contributions extend even deeper on Lund’s squad.

Cameryn Hawkins was an All-Region Third Team selection, a Region 3 All-Tournament Team and an All-WNYAC choice, and has a team-leading 451 digs; Russo was named to the Region 3 All-Tournament and All-WNYAC teams, racking up 1,024 assists, good for seventh in the country; Alexys Marsh leads the team in blocks with 72 to go along with 172 kills; and Megan Gominiak has 52 blocks.

Oh, by the way, Lund was named the Region 3, as well as the WNYAC Coach of the Year.

“(Lund) has identified people’s roles, identified expectations and she’s also able to, when they walk off the court, to be able to have that family environment,” Sisson said. “She’s developed a culture of how a family operates. That’s a volleyball family.”

The “family” from Jamestown CC opens play this afternoon.

NOTES: A viewing party is scheduled at 1 p.m. today at the Physical Education Complex.