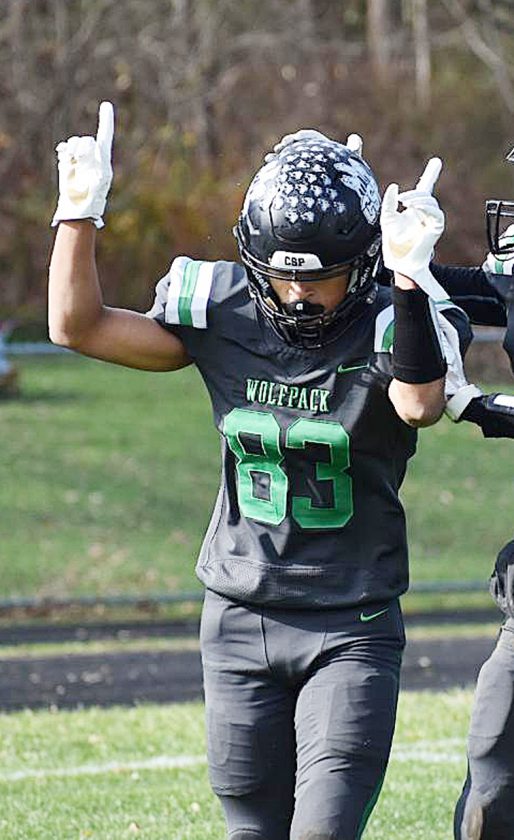 Zavon Overton is one of several upperclassmen who have led Clymer/Sherman/Panama into today’s Class D Far West Regional football,

“Hey, Hinsdale,” Coach Ty Harper yelled in the direction of a group of his Clymer/Sherman/Panama players huddled together moments before a football practice earlier this week.

On command, Wolfpack quarterback Gerrit Hinsdale trotted across the turf at Charles A. Lawson Field on the campus of Southwestern Central School where he was asked by a reporter for the umpteenth time about the gadget play that he and teammates John Swabik and Cameron Barmore engineered to help carry the Wolfpack to a 22-0 victory over Franklinville/Ellicottville for its second straight Section VI Class D championship.

Four days and a SportsCenter top-10 play recognition later, Harper was still smiling at the pitch, pass and catch his three star players executed at New Era Field. He also was proud of the way they have led an otherwise inexperienced roster this fall in their pursuit of back-to-back New York State Public High School Athletic Association Class D titles.

“Obviously, there is their physical talent; they bring a lot to the table in that sense,” Harper said. “But from a leadership perspective we were so young coming into this year and we leaned so heavily on those guys, especially in those early weeks, to kind of show the young players how it’s done here.”

Hinsdale, Barmore, Swabik, along with Zavon Overton, will be leading the Wolfpack (8-1) into the Far West Regional against Section V Batavia Notre Dame (10-0) at 5 p.m. today at The College at Brockport.

Hinsdale has passed for 1,460 yards and 22 touchdowns; Barmore has 35 receptions, nine TDs, including two last week, and 11 sacks; and Swabik and Overton have done a little bit of everything on offense, defense and special teams. Toss in solid play from running back Connor Cooper (672 yards and 11 TDs, including one in the sectional title game), behind an improving offensive line, and Clymer/Sherman/Panama appears to be playing its best football of the season at just the right time.

“I think they’re confident, which is good to see,” Harper said. “We talked about the importance of peaking at the right time, and I think we’re seeing that right now. They should be confident. We’ve got some guys who are far more experienced than they were at the start of the season. I think they’re excited to get out and play again, especially after Saturday’s performance.”

Meanwhile, the Fighting Irish defeated defending champion Alexander, 14-7, in the Section V title game for its first championship since 2012 and its eighth overall. Jedidiah Reese scored both touchdowns, one on a 17-yard run and the other on a 26-yard punt return.

Alexander closed to within 14-7 when Tyron Woods Jr. threw a 21-yard touchdown pass to Kameron Lyons with 10:08 to play. According to a report in Rochester’s Democrat & Chronicle, Alexander followed the score with a successful onsides kick that was contested by Batavia Notre Dame head coach Joe Zambito and led to his subsequent ejection following a pair of unsportsmanlike conduct penalties.

But the Fighting Irish held on.

“The Reese kid, who is their primary ball carrier, is very explosive, fast and shifty, and likes to cut back in the open field. He has some “Shady” McCoy-like qualities to him,” Harper said. “I think he’s the guy we have to focus on stopping, but they have some other nice pieces, too, as far as their skill guys.

For those wondering, the Wolfpack defeated Alexander, 29-6, in last year’s Far West Regional.

Hinsdale, Barmore, Swabik and Overton all were factors in that game.

“They thrive in the biggest moments with the most pressure,” Harper said. “They don’t really feel that pressure like a lot of kids do. … You’re lucky if you have one kid that thrives in that situation. We’ve got a few that really relish the opportunity.”

The winner of today’s game advances to the NYSPHSAA Western semifinals at 4 p.m. Nov. 22 at Cicero-North Syracuse High School.

The preview of Saturday’s Class C Far West Regional game between Southwestern and Warsaw/Letchworth will appear in Saturday’s Post-Journal.