Maycocks Have Family Reunion On Court 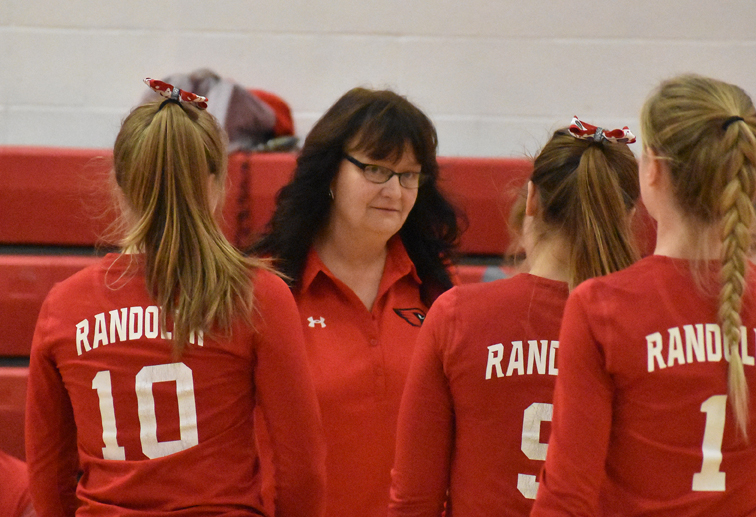 In photo above, Randolph volleyball coach Robin Maycock instructs her team during Friday’s nonleague volleyball match against Falconer, which is coached by her daughter, Marah Micek, second. P-J photos by Jay Young

RANDOLPH — The Randolph volleyball team found itself in some back-and-forth battles at home on Friday night, but the Cardinals managed to get out of all of them on the way to a 25-22, 25-19, 25-20 win over Falconer in nonleague action.

That win moves Randolph to 12-3 on the year while the Golden Falcons fell to 8-8.

Fans were certainly treated to some competitive volleyball, but the battle going on behind the benches was just as special. Longtime Cardinals coach Robin Maycock added one more mark to her already extensive resume, as she had the chance to square off against her daughter, Falconer head coach Marah Micek.

To top it all off, Robin’s younger daughter Mckenna Maycock, a former Randolph volleyball star in her own right, was in attendance and celebrating her birthday.

“It’s one of those things that I can’t ever envision happening, and then it happens. It was just fun,” said Robin Maycock. “When we scheduled it (Marah), wasn’t the coach. Then, once she was the coach, I was so excited that we were playing. I’m just really proud of her and how hard she is working. It’s fun to play after her helping me for two years.” 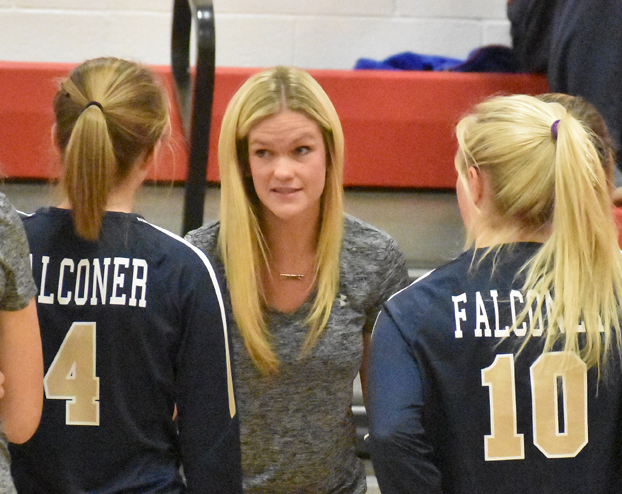 After continuing to pursue her playing career with the Fighting Scots, Marah has shifted her focus to starting her own winning tradition at Falconer.

What is the biggest coaching lesson that she has picked up from her mom?

“I think the biggest thing is giving all-out effort all the time,” said Marah. “She always expects the girls to perform at their best on game day and that is what I’ve learned from her. I know she was my mom, but a coach should be a companion to you, someone you can look up to, and that is what I want to be for my teams going through the future.”

Having the opportunity to coach in a contest with her mother was made all the more special by the setting.

“It’s just an awesome opportunity to get to play here, get to face a school and a team that means so much to me,” said Marah. “I’m just trying to grow that same atmosphere that I used to play in with my mom on my own team. I think if I can do that, I’ll be pretty well off.”